Sermon: Would we really want God to appear?

Posted on December 4, 2021 by Avril Hannah-Jones

Advent is a season of waiting, of preparing for the coming of the Lord. Advent could take the second-last verse of the Book of Revelation as its theme: ‘The one who testifies to these things says, “Surely I am coming soon.” Amen. Come, Lord Jesus!’ (Revelation 22:20. Yet today’s readings make me wonder whether we really do want the Lord to come.

The first reading comes from the prophecies of Malachi, made after the Babylonian Exile had ended and the exiles had returned home. The hopes of restoration had not been fulfilled, and people had begun to ask whether God genuinely loved them. Immediately before today’s reading Malachi warns the people that they have wearied the Lord. ‘[Y]ou say, “How have we wearied him?” By saying, “All who do evil are good in the sight of the Lord, and he delights in them.” Or by asking, “Where is the God of justice?” (Malachi 2:17) It is in this context that Malachi makes the prophecy we heard this morning, of the Lord suddenly appearing in the temple. Hence Malachi warns them that the coming of the Lord will be like refiner’s fire and fuller’s soap, resulting in not just a superficial cleansing but cleansing by extreme heat and strong lye. The people cry out for justice; Malachi warns them that the justice that comes might be executed on them. We are given this prophecy in Advent as good news. Is it really?

The lectionary also gives us two readings from the Gospel according to Luke. The first is the canticle, known as the Benedictus, that Zechariah sings at the circumcision and naming of his son John. The lectionary never gives us the story of Zechariah, although we hear of the Visitation of Mary to his wife Elizabeth, but it is one that we should remember. Luke’s gospel starts where it ends, in the temple in Jerusalem, where Zechariah is offering incense while the whole assembly prays outside the sanctuary. The angel Gabriel then appears and tells Zechariah that he and Elizabeth are going to have a son. Zechariah is sceptical, asking ‘How will I know that this is so? For I am an old man, and my wife is getting on in years’. Because of his disbelief he is struck mute. He leaves the sanctuary unable to speak, and returns to his home. His wife Elizabeth then conceives, and she remains in seclusion until her young relative, Mary, visits her.

We know that Mary’s response to Gabriel when he tells her that she will conceive, is ‘How can this be, since I am a virgin?’ Unlike Zechariah, she is not punished for her question. It could be that Gabriel expects more of an elderly priest, a privileged male leader of the ruling classes, than of a teenage girl. It could be that because what was going to happen to Elizabeth had happened so many times before – Sarah, Rebecca, Rachel, Hannah, and the mother of Samson were all barren until the Lord opened their wombs – Gabriel thinks a man educated in the history of his people should be ready to believe it. Either way, Zechariah is kept mute until his son is circumcised, when those around wish to name the child Zechariah for his father. Elizabeth intervenes and tells them his name is to be John, ‘God is gracious,’ as the angel Gabriel had commanded. They turn to Zechariah and he writes, ‘His name is John’ and suddenly his muteness ends and he sings the canticle we hear today.

Maybe Zechariah’s muteness was not punishment for his disbelief but the very sign for which he asked. Over the nine months that his wife carried John, Zechariah, too, is kept pregnant with meaning, the words he bursts out with as soon as he can speak. This privileged man has become one of ‘the lame, the maimed, the blind, the mute’ (see, for instance, Matthew 15:30) who need healing. Luke’s Nativity story is full of the over-turnings about which Mary sings in the Magnificat, and this is one of them. In the birth of John something new is coming into the world to foreshadow the further new thing that will happen with the birth of Jesus. Zechariah rejoices, praising ‘the tender mercy of our God’ which will enable God’s people to ‘serve him without fear, in holiness and righteousness before him all our days.’ But to reach this moment of joy he has had to give up his privilege as a religious professional, a priest knowledgeable about all things divine, serving at the centre of national life, and wait patiently and silently. Undoubtedly Zechariah would have asked God to allow him and Elizabeth to have a son, and in his song we hear his gratitude not only for this gift but for the liberation of his people, but there is no doubt that this appearance of the Lord has deeply disrupted his life. 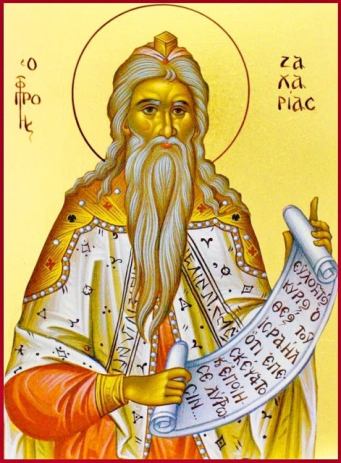 The disruption and topsy-turviness of Jesus’ coming is also in today’s second reading from the gospel according to Luke, which describes the beginning of the adult John’s ministry. It is noticeably short and almost forty per cent of it simply sets the historical scene. That is a lot of time to take to tell us when the word of God came to John. If all Luke had wanted to tell us was the date, he would just have needed to write the very first phrase: ‘in the fifteenth year of the reign of Emperor Tiberius’. Everything after that is gratuitous. So what is it that Luke is telling us?

Luke is reminding his Jewish audience that John the Baptist was the last in a lengthy line of prophets. All the books of prophecy in the Hebrew Scriptures begin with the same sort of scene-setting: In the days of Uzziah, Jotham, Ahaz, and Hezekiah, kings of Judah, or in the days of King Josiah son of Amon of Judah, in the thirteenth year of his reign, or in the thirtieth year, in the fourth month, on the fifth day of the month, the word of God came to Isaiah, or Jeremiah, or Ezekiel. By beginning his story of the adult John in the same way, Luke is reminding his Jewish audience that John the Baptist is a prophet just like the prophets of old.

For Luke’s Roman audience the message of his scene-setting would be that Jesus’ life, death and resurrection were part of world history. They were not something that happened once upon a time, or a long time ago in a galaxy far, far away. His baptism happened in the fifteenth year of the reign of Emperor Tiberius, in the Jordan river, a particular time and a particular place. In Jesus’ life, death and resurrection God entered human history, and Luke’s careful words tell us that we can date the moment at which God did that. This is something that Christians acknowledge every time we say the Apostles’ Creed and affirm that Jesus ‘suffered under Pontius Pilate’. With that phrase we assert that Jesus was a historical figure executed by another historical figure. We may believe that Jesus was much more than that, as the rest of the Creed proclaims, but we certainly do not believe that Jesus was anything less.

The final and most important reason for Luke to list all the political and religious leaders of the time is to remind us that the visitation of God to humanity is deeply disruptive, a time when all human hierarchies are over-turned. Luke lists the high and mighty ones of the world: the emperor; the governor; kings and priests. And then he tells us that the word of God came to none of them, but to a man in the wilderness. Luke does not give us the further details about John that Mark gives, he doesn’t tell us that ‘John was clothed with camel’s hair, with a leather belt around his waist, and he ate locusts and wild honey.’ (Mark 1:6) But he still shows us a man who lives on the margins of his society. It is to those margins that the word of God comes, and to the people on those margins that Christ will minister.

In the canticle that he sang Zechariah talked of God visiting humanity. The lines that the Bible gives us as ‘he has looked favourably on his people’ and ‘the dawn from on high will break upon us’ both use the Greek word for ‘visit’. In the coming of Jesus, prepared for by John, God has come to visit us. We want this to happen, we cry out for God to be with us, but the readings today warn us that this does not happen without change and upheaval. When the Lord visits, as Malachi warns his people, impurities are burnt, scrubbed away, and we are left refined. John’s message was a ‘baptism of repentance for the forgiveness of sins’. We will hear more of his preaching next week in which he tells the people to change their ways as the Messiah approaches. Given all this I wonder, as I said at the beginning of this Reflection, how honest we are when we spend Advent singing ‘O come, O come, Emmanuel’.

After spending the week pondering this, I finally decided that our Advent appeal for God to visit us is of course an honest one. Even if God’s coming means we must change our ways, give up our privileges, be refined and made pure, it also means that we will be able to worship God without fear in holiness and righteousness all our days. God comes to us with tender mercy to give light in our darkness, to free us from the shadow of death, and to guide our feet into the way of peace. I suspect that even when Malachi sternly warned the complaining people of Israel that God would come like a refiner’s fire and like fullers’ soap they still called out, ‘Amen. Come!’ Just as Zechariah ended his months of silence with an outpouring of joyous song, so we, too, can accept our period of purification with joy because it means Emmanuel, God is with us. Darkness and death are dispelled, and we rejoice, because God is here. Amen. Come, Lord Jesus!

This entry was posted in Sermons and tagged Advent 2, Gospel according to Luke, John the Baptist, Luke 1:68-79, Luke 3:1-6, Malachi 3:1-4, Year of Luke, Zechariah. Bookmark the permalink.