Sermon: Following in the footsteps of the Apostle Peter and Dietrich Bonhoeffer

These weeks that we have between Christmas and Lent are dedicated to the nature of vocation or call. We’ve seen Jesus’ call to begin his public ministry in his baptism, when the Holy Spirit descended on him and God announced that Jesus was his Beloved Son. And both last week and this week we see the calling of Jesus’ first disciples, those first followers who will form the nucleus of the new community to which all of us now belong through our own baptism.

If you can remember last week’s reading from the Gospel according to John, you might be a little puzzled at the differences between that description of the call of Jesus’ first disciples and today’s. John tells us that Andrew and another disciple were initially disciples of John the baptiser, and that it was John’s recognition of Jesus as the Lamb of God that led to the disciples seeking Jesus out. It was only after spending time with Jesus, responding to his invitation to ‘come and see,’ that the disciples recognised Jesus as the Messiah. Then Andrew sought out his brother Simon, whom Jesus renamed Peter. John’s story would have made sense to a Jewish audience, used to disciples seeking out their own rabbi.

Today’s story from the Gospel according to Matthew, which tells the calling of those same disciples, is very different. (Incidentally, I have no idea how anyone who actually reads the Bible can be a biblical literalist. As with the two different Nativity stories, if the compilers of the canon wanted us to take the Bible literally all they would have needed to do was make some quick edits to remove all the contradictions.) John wanted us to think about the relationship between Jesus and John the baptiser. In John’s version, we’re shown that the one coming after John is actually the one who preceded him, and that the one who was baptised was greater than the one doing the baptising. A lot of this call story in the John’s story is about John, rather than Jesus, and the ministry that John was called to.

Matthew has a different focus and tells a different story. While John talks about the disciples needing to ‘come and see’, to make the decision to experience Jesus for themselves, Matthew tells us about the over-whelming nature of Jesus’ call. Once again, in Matthew’s telling, we are at the very beginning of Jesus’ public ministry. He’s been baptised by John, and tempted in the desert, but has performed no miracles or started teaching. Jesus is proclaiming the same message that John proclaimed, ‘repent, for the kingdom of heaven has come near’, but unlike John he isn’t baptising those who repent. Now he calls four disciples. This is how Matthew describes the response of Simon and Andrew to Jesus’ call: ‘Immediately they left their nets and followed him. As he went from there, he saw two other brothers, James son of Zebedee and his brother John, in the boat with their father Zebedee, mending their nets, and he called them. Immediately they left the boat and their father, and followed him’ (my italics).

Jesus calls, and immediately Simon, Andrew, James and John leave everything that they are doing and follow him. We don’t know whether they had heard Jesus’ proclamation of the coming of the kingdom of heaven. We do know that if they had, that would have been all they knew of Jesus, that here was someone with the same message that John had preached, a message that had got John arrested. But Simon and Andrew leave their nets and John and James their boats and their father, and follow. It’s clear that they were leaving behind relatively secure and stable lives as fishermen, a life that in the case of John and James included their father, and yet when Jesus calls they follow immediately. With just a few words, the men are his. One commentator describes this scene by saying that ‘Jesus summons with irresistible authority and the men respond with radical obedience’.

The way the disciples answer Jesus’ call – immediately – is contrary to most of the call narratives in the Hebrew Scriptures. In those stories of call, the first thing the person called by God tries to do is get out of it. Moses reminded God that he stammered; Jeremiah said that he was only a boy; when God told Jonah to go to Ninevah in the East; Jonah fled to Tarshish, the furthest known point in the West, for Hebrews the far end of the world. Very few people called in the Hebrew Scriptures respond to the call with Elijah’s ‘here I am, Lord, send me’ response. But in today’s story Jesus’ future disciples answer the call without question or argument. Matthew’s version of their calling shows something fascinating – according to Matthew’s telling the disciples do not choose Jesus. Jesus chooses them. The implication is that the same thing is true of us. We do not choose Jesus. Jesus chooses us.

That’s a very strange thing to say in our world of choice. After all, we’ve all chosen to be here at church this morning. We’ve all made our own decision to follow Jesus. But just as the author of the ‘First Letter of John’ reminds his readers that we love because God first loved us (1 John 4:19) so we have chosen Christ because he first chose us. This is one of the reasons that the Uniting Church joyfully baptises babies. Babies have not made their own decision to join the church and follow Christ, as far as we know, but we baptise them because we believe that the initiative in baptism comes from God. This is true no matter how old the person being baptised is; it’s just more obvious when the person being baptised is a baby. Our society values individual choice and the choice to follow Jesus is an important part of our faith journey. But it doesn’t start that journey. The initiative is God’s.

However we respond to the call from Jesus, whether with radical and immediate obedience or more slowly and reluctantly, the first response to that call does not end the matter. We know that Simon Peter, James and John, for all their enthusiasm in today’s story, were not perfect followers. We know that Peter later denied Christ (Matt 26:69-75); that the mother of James and John asked that they sit on the right and left hand of Jesus in his kingdom (Matt 20:20-28); and that all three of them slept when Jesus needed them in Gethsemane (Matt 26:36-46). I find that extremely reassuring. The first disciples, those personally called by Jesus, those who responded immediately, stuffed up. Just as it strange that we worship a God who became human and a Messiah who was crucified – just ask Jews and Muslims what they think of that – so it is strange that Jesus’ first disciples, those called by him by name, were such failures in their discipleship right up to the moment that the risen Christ appeared to them. But then another thing that Matthew is reminding us in this story is the unexpectedness of Jesus’ choices of followers.

At the beginning of today’s story we are told that Jesus withdraws to ‘Galilee of the Gentiles’, living in a place with a mixed population of Jews and Gentiles, a place where Isaiah promised light would shine on Jews and Gentiles alike. As with the arrival of the Magi to honour the arrival of the king of the Jews, so here at the beginning of Jesus’ ministry we see a hint of the way the gospel according to Matthew will end, with the great commandment to make disciples of all nations. The community born when Jesus calls the fishermen from their nets will become an international community. It will reach throughout the world and throughout time and will come to include us. Each one of us has been chosen by Christ, called by Jesus to follow him. It is a strange community, this community of Christ, including all sorts of people.

This week a newly-published letter was released by the International Bonhoeffer Society from Dietrich Bonhoeffer, the German theologian, to Gandhi. It was written in 1934 from London and in it Bonhoeffer asks Gandhi if he might come and stay with him, to learn from him what a Christianity based on the Sermon on the Mount might look like. Bonhoeffer is one of my Christian heroes. Ultimately he was executed by the Nazis for his involvement in a plot against Hitler, but he had been involved in the Confessing Church of Germany, teaching at illegal seminaries, for years before. In his letter to Gandhi he writes: ‘the next war will certainly bring the spiritual death of Europe. What we need therefore in our countries is a truly spiritual living Christian peace movement’. Bonhoeffer asked if he could come and see Gandhi because: ‘I do not want to accuse myself of having missed the one great occasion in my life to learn the meaning of Christian life, of real community life, of truth and love in reality’. Bonhoeffer didn’t visit India; instead he returned to Germany to teach at the Confessing Church’s underground seminary in Finkenwalde. When that was closed he travelled around villages conducting ‘seminary on the run’ with his old pupils. We know that he did find real community life, truth and love in reality, in Finkenwalde, because out of it he wrote the beautiful little book Life Together. 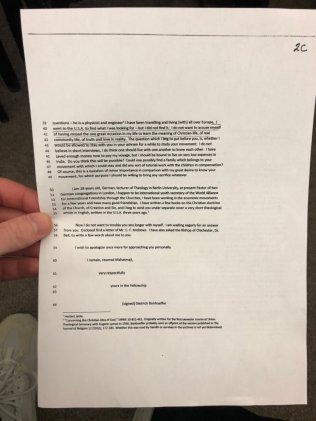 I’m speaking about Bonhoeffer partly because he is one of my heroes and I’m always glad to have the opportunity to bring him into a sermon; partly because his letter to Gandhi has been newly translated and made public this week, so it is news; but mostly because his entire life is a demonstration of the way in which we can learn more and more about what Jesus’ call of us means. Someone who thought he was called to a safe and comfortable academic life can end up as a martyr for the faith. Someone like Simon Peter, can fail Jesus time after time, still be the rock on which the church is built, and finally glorify God by his death. None of us knows, when Jesus calls us with that over-whelming, irresistible call, how our life in Christ will end. But we can be sure that there will be times when we fail and fall short of our vocation, of what our call means. And that that’s okay, because in doing so we will be following the examples of disciples like the Apostle Peter and Dietrich Bonhoeffer.

Jesus has called each of us here to come and follow him. He wants every single one of us. No matter how that call came, no matter how long we take to answer it, no matter how often we fail to live up to the full responsibility of it, that is something we can celebrate. Amen.