Last week’s service was a celebration, in which we rejoiced that we are all lights in a dark world, our good deeds glowing gloriously as testimony to God. Today’s sermon is not nearly such a happy one. Today I’m going to talk about good Christians being angry with and insulting each other; being, as Paul writes, of the flesh. I’m going to need some nice comforting chocolate at the end.

But before we get to that, a comment about what is not happening in today’s extract from the Sermon on the Mount. Christianity has too often played down its Jewish roots, and emphasised a disjunction between Jewish law and Christian grace. Passages like today’s are used to support that distinction: Jesus saying ‘You have heard that it was said … but I say to you’ is read as Jesus over-turning the law. But in a part of last week’s reading, which we didn’t hear because I wanted us to focus on our call to be light, Jesus says:

Do not think that I have come to abolish the law or the prophets; I have come not to abolish but to fulfil. For truly I tell you, until heaven and earth pass away, not one letter, not one stroke of a letter, will pass from the law until all is accomplished. (Matthew 5:17-18)

For Matthew, as I’ve said before, Jesus is the new Moses, the authoritative interpreter of the law, and that’s what he is doing here. For Jews the law, the Torah, wasn’t a burden; it was a privilege and a blessing, a revelation of God’s love for them. The psalmists wrote of the law of the Lord: ‘How sweet are your words to my taste, sweeter than honey to my mouth!’ (Psalm 119:103); ‘More to be desired are they than gold, even much fine gold; sweeter also than honey, and drippings of the honeycomb.’ (Psalm 19:10) Jesus’ ‘You have heard that it was said … but I say to you’ isn’t replacing the law; it’s going to the root of the commandments, the meaning behind them.

So, it’s not enough to simply not murder; that’s a pretty minimal requirement for anyone in relationship with God. Anger that is well short of a killing rage can still be destructive of people and relationships. Jesus recognises that we do get angry, but tells us that the response to our anger should not be to insult others or call them a fool. And that if we do express our anger in such a way that it hurts another, then we need to seek reconciliation with them before rejoicing in our place as a member of God’s family.

In the same way, the commandment not to commit adultery is a minimal requirement. Jesus goes to the source of the problem of infidelity and says: ‘everyone who looks at a woman with lust has already committed adultery with her in his heart’. Lust is looking at someone as a sex object, rather than as a human being; a person whose only worth is in how attractive they are to others, rather than being based on their identity as a beloved child of God. Possibly this is the commandment that our hyper-sexualised society needs most to hear. But you’ll be relieved to know, I’m sure, that commentators are agreed that the discussion about tearing out eyes and cutting off hands is an example of Jesus’ well-known hyperbole. Do not do it!

I’m not going to say anything about the commands against divorce, and making oaths here because I want to return to anger. Ask me about those over morning tea. I need to get back to the sin of insulting our brothers and sisters and calling them fools.

On Friday, the founder of Sydney’s Centre for Public Theology put this photo on his Facebook page. The quote is from Adrian Plass, the British Anglican author of The Sacred Diary of Adrian Plass aged 37 ¾ and An Alien at St Wilfrids, among many other books. Adrian writes sometimes as himself and sometimes as the character ‘Adrian Plass’, and the diary is written by the character. (One of the titles in which he writes as himself is View from a Bouncy Castle, so it’s probably no surprise to you that I have a small collection of his books.) 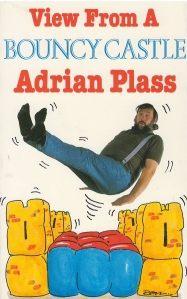 Near the beginning of the Sacred Diary, Adrian writes: ‘Guest speaker at church today, dressed in a monk’s habit. He said that God is nice and he likes us. Everyone looked at Edwin to see if we agreed.’[1] The sign from Pymble Uniting Church took that as a quote and made a small change, on the basis that God is neither a He nor a She. 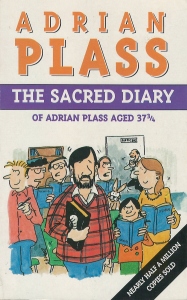 In response to this photo ministers and pastors from around Australia went mad. The original poster said that he had put the photo up so we could all mock it as a bit naive and as bad PR, which I think was unkind, but not ill-meant. A lot of the responses, however, were deeply ill-meant. Just a few to give you a taste:

There was so much anger and hatred in the responses that reading them made me feel sick. Outrage was aimed at the Uniting Church as a denomination, with a great deal of smug sympathy being offered to us for having lost our way. Many of the responses referred to a God who is in no way nice and definitely does not like humanity, a God who is going to condemn all but a chosen few to a fiery hell. And, of course, for many people the idea that God might not be male was absolute blasphemy. In the end the discussion became so ugly that the post was taken down.

I was shocked at the level of hatred that ministers, ‘professional Christians’, including some from the Uniting Church, were expressing, but I can’t stand here and pretend that I wasn’t part of it. I started off by simply suggesting that people should put their passion into worthier causes and stay hydrated in the heat, but then I allowed myself to be drawn in. I didn’t say in so many words, ‘You fool’, but I definitely implied it. When responding to someone who told me that God was definitively male, I asked how exactly God was male. Did God have XY chromosomes? Testosterone? Male genitalia? I was definitely being spiteful.

The moral of this story is not, as many people have suggested, that I spend too much time on social media and I need to find more healthy pursuits – although that may be true. Social media like Facebook and Twitter aren’t all links to interesting articles and photos of our loved ones; they expose us to humanity’s failings, as well as to information about what people have eaten that day. But social media don’t manufacture anything that wasn’t already there. The intellectual arrogance that leads me to condemn some people as idiots is a part of me, even if I don’t usually express it with the bluntness that Facebook brings out in me. And I feel okay about saying that here, because I’m pretty sure that no one in this room is perfect.

Spoiler alert: next week’s gospel reading ends with the command: ‘Be perfect, therefore, as your heavenly Father is perfect.’ I’m going to wait until next week to tell you why I think that Jesus is saying that to impossibly imperfect people like us. All I want to say today is that we are all going to fall short of the perfection that the Sermon on the Mount asks of us. But that doesn’t mean we should stop trying to live it out. In the Sermon on the Mount Jesus is showing us a way to live in relationship with a God who loves us. And so, as I have said so many times, when we fail the God who loves us is there to pick us up as we repent and seek for reconciliation. When we gather around the table together, as we’re about to do in a moment, Christ feeds us with his very self to give us the strength that we need to try again. We are lights in the darkness of the world, as we celebrated last week, and when our lights flicker and dim, as they will, they are relit by Christ the Light of the World.

We are loved. We are liked. We are forgiven. Thanks be to God. Amen.

This entry was posted in Sermons and tagged Adrian Plass, Gender, God likes us, love, Matthew 5:21-37, Sermon on the Mount, Year of Matthew. Bookmark the permalink.