Christianity says two things about human beings. Actually, it says lots of things about human beings, but there are two particular elements of Christian anthropology that I want to focus on today. The first is that we are all, without exception, beloved children of God. The second is that we are all, without exception, sinners. We are both God’s beloved sons and daughters, in whom God is well-pleased, and we are those who have sinned and fallen short of the glory of God (Romans 3:23). 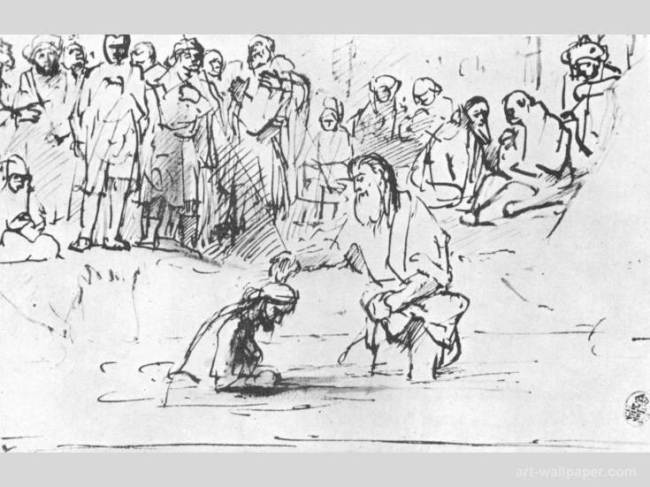 ‘Sin’ is a difficult word for us twenty-first century people to hear. It’s not a word that most of us take seriously anymore. That might be partly the Church’s fault. One stereotype of the historic Church is that it spent all of its time telling people that they were miserable sinners, totally depraved, and that everything they did was wrong. That’s an exaggeration, of course, but there is a pinch of truth in it. Unsurprisingly, many people rebelled against that idea. In our modern post-Enlightenment society, which sees human beings as completely free and naturally good, the idea of sin is more of a joke than anything else. We can buy ‘Seven Deadly Sins’ chocolates and ice-creams, if we want, or ‘Sinner’ lines of clothing. Nowadays ‘sin’ commonly means ‘indulgence’ or ‘enjoyable naughtiness’.[1] Not something to be taken seriously.

But Christianity does take sin seriously. For Christians, sin isn’t about eating chocolates and ice-cream; it isn’t about indulging in things that are a bit naughty. As we understand it, sin is about our separation from God, about the way every single one of us fails to live up to our potential as the people God created us to be. One author I read on my recent holiday describes it as the ‘human propensity to muck things up’ – only the word he used wasn’t ‘muck’. ‘Sin’ is what causes us to do and say those things that have us waking up in the night in a cold sweat, or that leave us feeling as though we’ve got a rock in the pit of our stomachs as we wonder why on earth we would do or say something like that. The Apostle Paul knew the feeling. As he wrote to the Romans: ‘I do not understand my own actions. For I do not do what I want, but I do the very thing I hate’ (Romans 7:15). That’s sin, and that’s true of all of us. That’s what Christians mean when we acknowledge that we, like everyone else in the entire world, have sinned and fallen short of the glory of God.

We are sinners, and we are also the beloved children of God. We are made in the image of God, infinitely precious and treasured. You’d think this would be easier for us twenty-first century people to believe than our identity as sinners, but I’m not sure it is. I think a lot of us believe that we have to be perfect to deserve God’s love, and since we’re obviously not perfect we believe that God doesn’t love us. When we do those things that have us waking up in the night in a cold sweat, or that leave us feeling as though we’ve got a rock in the pit of our stomachs, we worry that God will reject us for them, forgetting that ‘the saying is sure and worthy of full acceptance, that Christ Jesus came into the world to save sinners’ (1 Timothy 1:15). Or even if we know that we and those that we love are beloved by God, we forget that the same is true of every other human being on the planet, even the terrorists and paedophiles and drug-dealers. They, too, are God’s children, and so are our sisters and brothers.

Today we are going to baptise Lindsay, Julie-Anne, Madison and James, and in the baptismal service we’ll see both these elements of Christian anthropology. As sinners, like all of us, Lindsay and Julie-Anne will be asked whether they repent of their sins and turn to Jesus Christ. As God’s beloved children, like all of us, in baptism Lindsay, Julie-Anne, Madison and James will be claimed as God’s own and welcomed into the family and faith of Jesus Christ. Once welcomed into that family, Lindsay and Julie-Anne, like all of us, will be charged to seek Christ in all people, to love their neighbours as themselves, to strive for justice and peace, and to respect the dignity of every human being. As sinners Lindsay, Julie-Anne, Madison and James will be cleansed and freed from their sins; as God’s beloved children they’ll be welcomed and blessed, as we all were in our baptisms, of which we’ll be reminded at the end of the baptismal liturgy.

Today is a particularly good morning to baptise people, because this Sunday the church celebrates the baptism of Jesus. Jesus didn’t actually need to be baptised. Alone of every human being who has ever lived, Jesus wasn’t a sinner. He never needed to repent and turn to God; he and his Father were one. According to Matthew, his request for baptism worried John who pointed out that things were happening the wrong way round and that it was he, John, who should be being baptised by Jesus. But Jesus’ baptism was another part of the Incarnation, of God’s amazing, unique intervention in history that we celebrated at Christmas. In the Incarnation, God became human, in the most wonderful act of solidarity with humanity, and in his baptism, Jesus, God-with-us, continued to act out that complete solidarity. By submitting to John, by plunging into the waters of the Jordan, Jesus gave us an example and modelled for us our own baptism. We human beings do need to be baptised, to go through the waters, to die to our old lives and be reborn to new lives, to repent of our sins and return to God. We do this in imitation of Jesus, who did it before us. In our baptisms we are united with him in his baptism, so that whatever is his may be called ours. This includes his relationship with God.

In response to Jesus’ baptism, to his righteous action, the heavens opened and the barriers between God and humanity were withdrawn. The Spirit descended upon Jesus and the voice from heaven said ‘This is my Son, the Beloved, with whom I am well pleased’. When we follow Jesus into baptism, we are baptised into his life and his death, and into his relationship with God. As the voice said to Jesus after his baptism, ‘This is my Son, the Beloved’, so God says to every one of us in our own baptism and forever afterwards: ‘you are my child, the beloved’.

I started this sermon talking about sin, so I want to end talking about love. Jesus, the one without sin, was baptised for the same reason that the Son became incarnate, that God became human. Jesus’ baptism revealed what the Incarnation revealed, what every aspect of Jesus’ life, death and resurrection revealed. God loves us. We are God’s beloved children. Baptisms remind us of this; in baptism, the word of the apostle is confirmed: ‘We love, because God first loved us’. Today and every day, when we confess our sins as much as when we celebrate baptisms, we rejoice in this. God loves us! Thanks be to God! Amen.

This entry was posted in Sermons and tagged baptism, Francis Spufford, Sermon, sin, Year of Matthew. Bookmark the permalink.