Jesus ‘emptied himself, taking the form of a slave, being born in human likeness. And being found in human form, he humbled himself and became obedient to the point of death—even death on a cross’.

Today we celebrate Jesus’ triumphant entry into Jerusalem for the Passover. Like pilgrims throughout time, Jesus’ disciples rejoice as they enter the holy city, praising God for God’s mighty deeds. It is a moment of triumph. Jesus enters on a colt that his disciples take for him from its owners simply by saying that ‘the Lord needs it.’ As Jesus approaches people spread their cloaks on the road under the colt’s feet. At this point I must make the mandatory remark that in Luke’s version of Jesus’ entrance into the city not only are there no palm branches, there are no branches of any sort. According to Luke today is ‘Cloak Sunday,’ not ‘Palm Sunday’ at all. But while there may be no palms, there is a monarch.

Luke portrays Jesus’ entry into Jerusalem as the entrance not simply of another pilgrim, but of a king. He enters on a colt that has never been ridden, a colt that has not been used by anyone else and so is suitable for sacred purposes. Jesus’ disciples set him on the colt, an act of homage. The spreading of cloaks on the road for the colt to step on is another act of homage to a ruler. The psalm that the crowd sings as they come into sight of Jerusalem has one small but significant change from the version in the psalter. Rather than singing ‘Blessed is the one who comes in the name of the Lord,’ the people sing, ‘Blessed is the king …’

As Jesus approaches Jerusalem the disciples praise God for all that they have seen in the past. But there is no doubt that they are looking forward to a wonderful future in which Jesus will declare himself ruler of the city and the whole nation. The messiah is about to enter his city! When Jesus was born the angels looked down and sang, ‘on earth peace.’ Now humans look up and sing, ‘Peace in heaven and glory in highest heaven!’ In Jesus heaven’s peace has come down to earth. What could possibly go wrong?

But we know what is going to happen in this city. We know that Palm Sunday is the celebration before the storm; and the storm is coming. The disciples do not yet know it, but it is to his death that Jesus is going as he approaches Jerusalem.

Considering this, the warning of the Pharisees that ends today’s gospel reading makes perfect sense. ‘Some of the Pharisees in the crowd said to him, “Teacher, order your disciples to stop.”’ It is possible that the Pharisees warning Jesus are friendly towards him and concerned for him. In Luke’s gospel Jesus is usually seen to be on good relations with the Pharisees, he visits the house of a Pharisee for a meal, for example, and here the Pharisees address him respectfully as ‘Teacher.’ And so, uneasy at the commotion, they warn Jesus that it would really be better if he entered the city more quietly. After all, entering Jerusalem for the Passover from the other side of the city will be the Roman Governor, Pilate, with his soldiers and chariots and gleaming armour, to make sure that there is no anti-Roman uprising while the Jewish people are remembering their liberation from slavery in Egypt.

From our post-crucifixion perspective, we know that the Pharisees are absolutely right. If Jesus had wanted to live a long and healthy life, entering Jerusalem in a parody of Pilate’s procession would not have been the way to go about it. Jesus’ entry as messiah is the way to get crucified. But this is the path that Jesus is willing to take. Jesus has the same mind that is in God, and so, ‘being born in human likeness,’ he submits to the same ending that comes to every human: death. And not just any death, but the most degrading and humiliating death, ‘even death on a cross,’ reserved for those who rebel against Rome, those whose idea of peace is not the Pax Romana that Pilate enforces with violence.

Jesus ignores the Pharisees’ warning, well-meant as it might be. ‘He answered, “I tell you, if these were silent, the stones would shout out.”’ The messiah is entering his city. This event is so amazing, so monumental, so central to the history of the world, that the world must acknowledge it in some way. If humans were quiet, the earth itself would shout out in acknowledgement. Blessed is the king who comes in the name of the Lord!

Jesus has been advised to take the quiet way, the safe route. He rejects it. Whatever the cost, whatever it leads to, Jesus needs to be true to who he is, which is who God is. God’s way of peace is not enforced with military might and power. It is entered into through humility, self-emptying, and sacrifice. It may look like defeat in the terms of the world, but it is in fact the greatest victory, because it is done in ‘in the name of the Lord’ and ‘to the glory of God the Father.’

Paul told the members of the church at Philippi, ‘Let the same mind be in you that was in Christ Jesus.’ For Jesus, as we know, this led to his rejection and death. It is terrifying, but true, that we are called to imitate Christ in this as in everything else. We too are called to empty ourselves; to live with humility; to pour ourselves out rather than saving ourselves; to give rather than to accumulate; to look after the interests of those most in need rather than our own interests; to seek God’s peace rather than the Pax Romana enforced with military might. If we live in this way, we may sometimes be praised and welcomed with approval by those who praise God joyfully with a loud voice for our deeds, but we are more likely to be criticised, rejected, and, particularly in Australia, mocked. 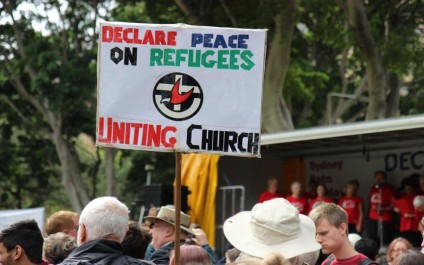 Here in Australia Palm Sunday is now as highly politicised as it was in Jesus’ day. This afternoon a march will be held in our city, as it has been held for many years, calling for justice for asylum seekers and refugees. Many of the people involved will not be Christian. Many of them will not have heard a Palm Sunday sermon or participated in a Palm Sunday liturgy this morning. Yet today’s rally will still be profoundly Christian. As Christians we are called to work for peace and justice and reconciliation, and that sometimes means taking that call to the streets. In Australia in recent years, it has meant opposing the civil and political powers that think that the mandatory detention and offshore processing of asylum seekers and refugees are acceptable.

I believe that Australia’s mistreatment of the asylum seekers who sought refuge here by boat has in recent years been this country’s greatest sin. It has been committed by both the ALP and the LNP, and has broken the hearts of supporters of both. In 2010 past Prime Minister Malcolm Fraser resigned from the Liberal Party after seeing a campaign ad from Tony Abbott that showed Australia being overwhelmed by a series of red arrows indicating hordes of asylum seekers swamping the country, telling friends that the ad was a ‘throwback to a racist past, and not just for the Liberal Party but for Australia’. Two years’ later, Prime Minister Julia Gillard reopened the detention centres on Manus Island and Nauru, and despite being the descendent of hereditary Scottish coal miners I have not voted for Labor since. Malcolm Turnbull revealed that there was no actual need to keep asylum seekers locked up in a phone call with Donald Trump in 2017 in which he reassured the American President that they were detained ‘not because they are bad people. It is because in order to stop people smugglers, we had to deprive them of the product. So we said if you try to come to Australia by boat, even if we think you are the best person in the world, even if you are a Nobel Prize-winning genius, we will not let you in,’ and Trump replied admiringly, ‘That is a good idea. We should do that too. You are worse than I am’. For a country that helped create the Refugee Convention, which specifically says that refugees do not need a visa if they are fleeing persecution, and that they cannot be punished for the means of their arrival, Australia has fallen a long way.

For so long it was hard to maintain hope that things would ever be any different, despite the religious leaders arrested to raise awareness of the issues, of whom I was one; despite the campaigning of Grandmothers for Refugees of which Jenny Preston is an active member; despite the advocacy of the Asylum Seeker Resource Centre here in Melbourne; despite the Game Over campaign led by Socceroo Craig Foster; despite all the people who have written letters and signed petitions and taken to the streets. And yet, nine years after New Zealand first made the offer, the Australian government has finally agreed to allow 450 refugees currently detained to be resettled in New Zealand. Although the government initially said that it would allocate only 15,000 visas over four years for Afghans fleeing the Taliban, and the visas would come from within existing programs, it has now announced an additional 16,500 places for Afghan refugees in 2022-23. At the very moment that I was writing this essay on Thursday it was announced that the last refugees held in the Park Hotel here in Melbourne were to be freed, and there are now only ten refugees left in detention across Australia. There is still work to be done; to convince the government to allow those on Temporary Protection Visas (TPVs) to settle in Australia permanently, for instance, but, praise the Lord!, that particular awful abuse is coming to an end. I do not believe any of that would have happened without the continuous hard work and advocacy of both Australians and the refugees themselves, many of us Christians campaigning because we believe this is what it means to follow Christ.

Jesus entered Jerusalem as a king, challenging the religious, civil, and political powers of his time, despite knowing that it would lead to his death. We do not face death, but we know that we are similarly called to challenge the powers of own time. Palm Sunday, when we celebrate Jesus’ own public and triumphal taking to the streets, is the perfect day on which to do it. And as we do this, we hold on to the knowledge that this story does not end in despair. The final act is not the cross. After Jesus’ death, Paul tells the Philippians, ‘God also highly exalted him and gave him the name that is above every name, so that at the name of Jesus every knee should bend, in heaven and on earth and under the earth, and every tongue should confess that Jesus Christ is Lord, to the glory of God the Father’. This time next week we will be celebrating Jesus’ resurrection, God’s justification of all that he did. As Christians we know that our story ends and begins again in resurrection. This means that we can work for peace, justice, and reconciliation with complete confidence, because God has already won the victory. All we need to do is encourage the world to catch up to that truth; that there is peace in heaven and glory in the highest heaven because of the king who comes in the name of the Lord. Thanks be to God, Amen.