Samuel Pepys: May 3, 1661
… and so out to Gresham College and saw a cat killed with the Duke of Florence’s poison. And saw it proved that the oyle of Tobacco, drawn by one of the Society, doth the same effects, and is judged to be the same thing with the poison, both in colour and smell and effect. (I saw also an abortive child, preserved fresh in spirit of salt.)

Do you remember Fuzzy Felt? I used to have a few boxes of them when I was a child. I can’t remember which ones I had, but I remember how they were used; a felt board on which felt pieces were placed to make a picture, each bit of the felt clinging to the other. 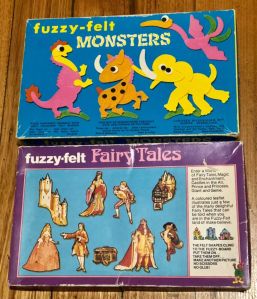 Recently Karen, the Children’s and Families’ Minister at Western Heights, pulled out the congregation’s huge collection of biblical Fuzzy Felt. They aren’t too bad, except that of course Jesus is too white and his robes are usually too clean. Apart from during the Transfiguration, when we’re told that his clothes ‘became dazzling white, such as no one on earth could bleach them,’ I’m pretty sure Jesus wouldn’t be walking the roads of first-century Palestine in gleaming white robes. Karen and I started talking about whether we could wash Jesus in coffee to give him a more middle-eastern skin tone. Then we looked through all the figures, to see if we could find someone who could be Jesus, but wasn’t wearing white. And we found a series of ‘contemporary’ people.

At first we laughed reminiscently, remembering the days when we, too, got ‘dressed up’ to come to church. We also laughed at the out-stretched arms, assuming that the Fuzzy Felt worshippers were attending a happy-clappy church. This seemed to be confirmed when we then found people of all ages in white robes, as though they had taken part in ‘believers’ or adult baptisms. 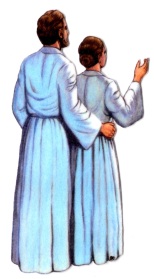 But, then, we found some angels. What were angels doing in this happy-clappy scene? 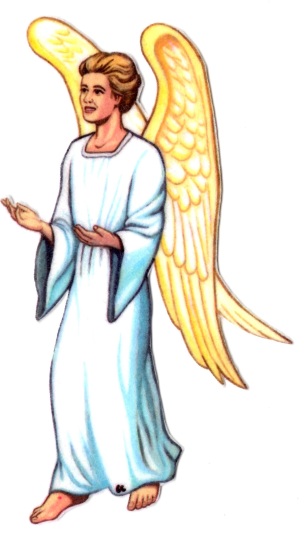 They could be joining in the worship, of course. In the Great Prayer of Thanksgiving we say that we are joining with ‘angels and archangels and the whole creation’ in praising God. But at least one seemed to be getting rather close to a white-robed human.

And then we found the tombstones. And not just tombstones …

Yeah, I can tell you now that there’s something about finding Fuzzy Felt open graves that makes one’s stomach lurch. The humans weren’t raising their arms at a very well-dressed evangelical service. The humans in white robes hadn’t recently been baptised. The angels weren’t joining in a Great Prayer of Thanksgiving. The dead were being raised from their graves! The angels were going to escort the white-robed dead up (definitely up, look at all those raised arms and faces) to Jesus in heaven.

What on earth sort of story were people meant to tell with these images? That we shouldn’t be afraid of death because angels will whip us out of our graves and takes us to be with Jesus? Is this meant to be a ‘Rapture’ scenario in which the dead and the living will both be ‘taken up’ together when Jesus returns? (Incidentally, the idea of being ‘raptured’ became very popular in evangelical America around the turn of the last century, but doesn’t play much of a part in Orthodox, Catholic, or non-American-influenced Protestant churches.) Surely those empty graves would be more likely to give children nightmares than reassure them. I certainly needed to have a nicecuppatea after seeing them.

One of the things I love doing when travelling is visiting old cemeteries. Gravestones are fascinating sources of social history: names; dates; causes of death; what details of a life are considered important to record in stone; who gets the big memorials and whose names are squeezed into the corners of someone else’s stones. Up to the middle of last century gravestones in Australia and the UK tell a horrifying story of infant and child mortality. A mother’s gravestone could list the six children who died in infancy on it together with her name and then maybe the names of the two children who lived to adulthood. People died young. Children died. And there needed to be some way for people to live with that fact. So they reasoned that the children were now with Jesus, maybe because they were ‘too good for this world’; because ‘God wanted them more’; to save them from everything that life throws at us as we grow up and grow old. And all those explanations made sense as a way of dealing with child mortality. But I hate them all.

Babies and children and young adults still die today; not routinely, not as many, but I have still conducted funerals for some. And in those funerals I have said that they are now in the hands of the God who loves them. But NOT because God wanted them more; NOT because they were ‘too good’ for this world. Just because sometimes horrible, devastating, things happen and that includes premature death.

We have been so lucky in Australia. So far fewer than 100 people have died from COVID19. That is still a tragedy; each of those deaths was still premature, and the people who mourn them will still be devastated. But we’re not seeing the tens of thousands of deaths that places like Italy and the USA and the UK are dealing with. When there is so much death it can seem comforting for churches to tell people that God has a plan, that God has a  reason for their grief. God doesn’t. God doesn’t ‘take’ people. The prophet Isaiah tells us that God’s intention is for everyone to live at least 100 years, and I believe that. God wants us all to die quietly and gently after a long, full, life. But we are not living in God’s perfect world, and so not all of us get that death. Churches need to be careful that in our understandable desire to comfort people who are grieving we don’t try to explain away their grief. Every single COVID19 death has been the premature death of someone who should not have died at this time, in this way. We need to remember that.