Posted on November 8, 2015 by Avril Hannah-Jones

Today I cheated a little in the Bible readings. In the entire three-year lectionary we only have two readings from Ruth, and rather than have one last week and one this week, I put them together so you could hear as much of the story as possible. What I would really like to do, except that we don’t have the time to do it, would be to read you the entire book. It’s a very, very great pity that the lectionary skips over most of it.

The readings we give us begin by telling us how the Jewish Naomi and the Moabite Ruth end up together in Bethlehem, two widows trying to survive. This is the part with Ruth’s amazingly powerful words to Naomi, so beautiful that they are often used at weddings:

‘Do not press me to leave you
or to turn back from following you!
Where you go, I will go;
where you lodge, I will lodge;
your people shall be my people,
and your God my God.
Where you die, I will die—
there will I be buried.
May the Lord do thus and so to me,
and more as well,
if even death parts me from you!’ 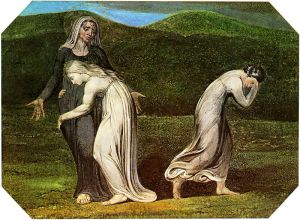 Then we have Naomi seeking to find some security for them, by telling Ruth to approach her kinsman Boaz, washed, anointed, and dressed up, and to do whatever he tells her. The lectionary has cut out the part where Ruth, as widows were permitted to, has been gleaning among Boaz’s fields. Boaz showed her favour and protected her from being harassed by his workers. But the harvest is almost over, and that’s all Boaz has done. So Naomi seeks to encourage Boaz to go further in his protection, by sending a prettified Ruth to his bed.

The lectionary then skips the next part of the story, when Boaz wakes up to find a strange woman in his bed, and asks her who she is, and Ruth practically proposes to him by saying ‘I am Ruth, your servant; spread your cloak over your servant, for you are next-of-kin.’ Boaz agrees, although there is a closer next-of-kin to Naomi who has first claim on Ruth in levirate marriage. Boaz, concerned for Ruth’s reputation, sends her away in the morning ‘before one person could recognize another; for he said, “It must not be known that the woman came to the threshing-floor.”’ He approaches the true next-of-kin, who relinquishes his claim to Naomi’s property when he finds Ruth is to come with it, Boaz telling him: ‘The day you acquire the field from the hand of Naomi, you are also acquiring Ruth the Moabite, the widow of the dead man, to maintain the dead man’s name on his inheritance.’ Then the story ends with the rest of today’s reading. Boaz and Ruth are married, and Ruth gives birth to Obed. The women of the city rejoice with Naomi.

The sting in the tail of this book comes at the very end of the reading: ‘They named him Obed; he became the father of Jesse, the father of David.’ In other words, David the greatest ever king of Israel, had a Moabite great-grandmother. This contradicted a very strong theme in the Hebrew Scriptures – the condemnation of inter-marriage and the resulting ‘mixed’ offspring.

In Deuteronomy the command was given to the people of Israel: ‘Do not intermarry with [Gentiles], giving your daughters to their sons or taking their daughters for your sons, for that would turn away your children from following me, to serve other gods. Then the anger of the Lord would be kindled against you, and he would destroy you quickly.’ (Deut 7:3-4) Even more specifically, Deuteronomy instructs the Jews: ‘No Ammonite or Moabite shall be admitted to the assembly of the Lord. Even to the tenth generation, none of their descendants shall be admitted to the assembly of the Lord’. (Deut 23:3). And as Israel rebuilt after the Babylonian exile, those who had married foreign wives were commanded to repudiate them, and agreed: ‘So now let us make a covenant with our God to send away all these wives and their children, according to the counsel of my lord and of those who tremble at the commandment of our God; and let it be done according to the law.’ (Ezra 10:3)

In contrast, the Book of Ruth not only shows a Moabite marrying a Jew and becoming the ancestress of King David, it also shows the commitment of this Moabite woman to the God of Israel, Yahweh, in her declaration to Naomi: ‘your people shall be my people, and your God my God. Where you die, I will die— there will I be buried. May the Lord do thus and so to me, and more as well, if even death parts me from you!’ (Ruth 1:16-17) Ruth not only says that Naomi’s God will be her God, she makes her vow in the name of that God. Ruth is a book that challenges religious, ethnic and cultural prejudice. There is plenty of such prejudice in the Scriptures, but in books like Ruth the Bible is having an argument with itself.

Ruth is also a wonderful part of the Bible for women to read and enjoy. Like Esther, Ruth is a heroine, a woman who in the service of others behaves in a most indecorous and unladylike manner, and whose breach of propriety is blessed by God. Poet June Jordan beautifully describes the impact the Book of Ruth can make on girls. Reflecting on Ruth’s passionate promise of commitment to Naomi she writes:

From earliest childhood, I remember one or another version of these passionate words. As far as I knew, they were the only memorable, and even startling, thoughts attributed to any woman in the Bible. And, as a little girl, I appropriated the fierce loyalty, and the all-out loving commitment embodied by this passage, as an ideal towards which I could and should eagerly aspire … What mattered to me was that, finally, somewhere, in that big Holy Book, there were words uttered by somebody female to another somebody female. And, what was most important was that her words matched up to the heroic qualities of the other biblical figures I came to memorize and assimilate inside the pantheon of my young heart. (June Jordan, ‘Ruth and Naomi, David and Jonathan: One Love’, in Out of the Garden: Women Writers on the Bible, p. 82.)

In a book in which the story’s action centres on losing and gaining husbands, it is the relationship between two women that holds the meaning of the story. There is no equivalently ardent declaration between Ruth and Boaz to compare with the one made by Ruth to Naomi; the word ‘love’ is only used of Ruth’s feelings for Naomi; and at the end of the story, when a male genealogy leading from Perez to David is given, in the midst of that masculinity, the women tell Naomi that Ruth ‘is more to you than seven sons’.

The love between Naomi and Ruth is counter-intuitive, they are Jewish mother-in-law and Moabite daughter-in-law, and it demands great sacrifice from Ruth, who leaves her own country and her own people to accompany Naomi to Judah. Ruth puts herself at some risk going gleaming alone, something that Boaz recognises when he tells her not to glean in another’s field, but to stay in his field where she’s safe because he has ordered his young men not to bother her. She follows Naomi’s instructions even when they put her in definite danger, seeking Boaz out alone at night in extremely compromising circumstances. As a result of all this, Ruth is first able to feed Naomi, and later able to give Naomi a son to replace the two she lost in Moab. The biblical story of David and Jonathan is a justly celebrated example of friendship; it is tempting to think that David inherited his capacity for inspirational friendship from his Moabite great-grandmother.

We live in a time that is just as full of religious, ethnic and cultural prejudice as was Ancient Israel. In the face of that prejudice, one of the most helpful things we can do is follow in the footsteps of Ruth and Naomi and make friends with people who are different from us. Not simply tolerate them, but actively welcome them into our lives. We don’t know: they, like Ruth, may end up being more to us than seven sons. Amen

This entry was posted in Sermons and tagged Book of Ruth, friendship, Ruth 1:1-18, Sermon, women. Bookmark the permalink.