Sermon for Williamstown
The second Sunday of Epiphany, 18th of January 2015 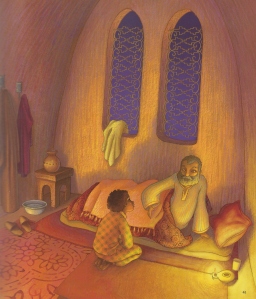 Today’s lectionary readings give us two stories of God calling people. I want to focus on the story of Samuel’s call, because it’s a surprising one when compared with the other call narratives in the Hebrew Scriptures. You may remember me telling you in other sermons that in the Hebrew Scriptures, when God called someone the person so called, whether Moses, Gideon, Isaiah or Jeremiah, was less than thrilled. Jonah, whose story we’ll hear next week, responded to his call by running as far as he could in the opposite direction. Few people in the Hebrew Scriptures who are called by God seem to rejoice at their call; they instead seem do their absolute best to get out of it.

Samuel’s response, as we hear today, was different. The story of Samuel comes from a time much like ours, when the word of the Lord was rare and visions were not widespread. Samuel, whose birth was a miraculous gift of God to his barren mother, Hannah, was serving in the Temple, but he didn’t know the Lord in whose very Temple he was living. And so, when he heard a voice calling him, he assumed that it was the voice of the priest: Eli. Three times God called Samuel, without Samuel recognising the call.

When Samuel did learn that the voice he heard was from God, he responded, eagerly and immediately: ‘Speak, Lord, for your servant is listening.’ The word of the Lord was unexpected, even in the very Temple of the Lord, but once Samuel realised who it is who is calling him, he offered himself and his life to God. His response is very different to that of Moses, Gideon, Isaiah, Jeremiah, and Jonah. Samuel was God’s servant, and his ears were open to hear whatever the Lord wants to tell him. As it turned out, the Lord was giving a warning: the sons of Eli were scoundrels who had no regard for the Lord or for the duties of the priests to the people, and the Lord told Samuel that he was going to punish them by deposing them from the priesthood. The story goes on: ‘As Samuel grew up, the LORD was with him and let none of his words fall to the ground. And all Israel from Dan to Beer-sheba knew that Samuel was a trustworthy prophet of the LORD. The LORD continued to appear at Shiloh, for the LORD revealed himself to Samuel at Shiloh by the word of the LORD.’ (1 Samuel 3:19-21) It’s a much more straightforward call and response than that of Jonah, for example.

Samuel was willing to listen to God as soon as he knew it was God who was calling him, but of course at first he didn’t know. How does Samuel come to recognise the voice calling him? With the help of Eli, an old man with failing eyesight who had been unable to discipline his sons when they misused their position in the Temple. It was this man, apparently well past his prime, whose wisdom and experience enabled the young Samuel to respond to God’s call. When I talk to children about this story I talk about Samuel, the young boy, called to be God’s servant and share God’s message despite his youth. But with you, I want to talk about Eli.

This congregation, like many congregations in the Uniting Church, is aging. I’m not sure what the average age of members here is, but the average age of members across the entire Uniting Church is 62, and I suspect that we’re not bucking that trend. Sixty-two isn’t particularly old, especially given the tendency of people in Williamstown to live into their nineties, but it’s not young, either. There’s a lot of angst about that around the church; what are we going to do as congregations age and the resources of time and energy that the church used to be able to draw on disappear?

I also know that some members of the church have a more personal concern. Why are their children and grandchildren not church-goers? Their children were brought up in the church; they attended Sunday School and youth group; and then they disappeared. The church-going of their childhood didn’t become an adult faith. The children of those children may have been baptised in the church, or they may not, but, again, the Christian faith isn’t part of their lives. I know that there’s a lot of pain about that in the Uniting Church today.

There are lots of different reasons that people might no longer come to church, and this isn’t the place to discuss them. What I do want to do is remind us all of Eli. Eli had failed as a father. His children hadn’t just stopped worshipping God; the Bible tells us: ‘Now the sons of Eli were scoundrels; they had no regard for the LORD or for the duties of the priests to the people.’ (1 Samuel 2:12-13a) They took more than their share of the sacrifice offered to God by worshippers, and if people complained they threatened violence. God’s first message to Samuel was to tell Eli that God was going to punish his house because his sons were blasphemers and Eli knew that and yet didn’t stop them. Eli is a less-than-helpful role model for parents concerned about raising their children in the Christian faith. And yet it was Eli, old, blind, and about to be deposed, who had the wisdom, knowledge and experience of the Lord to guide Samuel. Samuel, God’s chosen prophet, would not have known it was God who was speaking to him without Eli’s support. Eli had failed miserably with his own sons, and yet he was vital in helping Samuel become the prophet that the people of Israel needed.

If the Uniting Church is an aging church, maybe we can also seek to be a church of Elis, a church of mentors. We can look for the places where God is speaking to children and young people, who might not recognise that it is God calling them, and use our wisdom, knowledge and experience to guide them. Rather than being our own children, grandchildren, nieces and nephews, the people we are able to support may be as unrelated to us as Samuel was to Eli. And in mentoring them, we may have to accept our own ousting, as Eli accepted his removal, so that God can do something new.

When Samuel realised that it was God who was speaking to him he responded: ‘Speak, for your servant is listening.’ When Eli heard the message God had sent him through Samuel he replied: ‘It is the LORD; let him do what seems good to him.’ Both of them, the little boy and the old man, were open to what God was saying and doing. We can learn from both of them; and the most important thing we can learn from them is trust. We are all, individually and collectively, in the hands of God. And so we have no reason to fear the future, despite our aging. Whatever happens, God will be with us. For that we can give thanks to God. Amen.

1 Response to Sermon: Should the Uniting Church become Eli?