Sermon: Avril bangs on about asylum seekers yet again

“Do not neglect to show hospitality to strangers, for by doing that some have entertained angels without knowing it.” – Hebrews 13:1

It was a service for boat people. As Rev. Dr Garry Deverell reminded us on Wednesday, all Christians are boat people. Part of the story of both Jews and Christians is a journey through water from death to life, whether through the miraculous parting of the Red Sea or through baptism. The church is often described as a boat, which is why this part of the church building that we’re sitting in today is called a ‘nave’, from the Latin navis or ship, and why the logos of the World Council of Churches and the National Council of Churches in Australia both resemble boats. Not only are Christians boat people, most Australians are the descendants of ancestors who came by boat. I certainly am, as the child of ten pound Poms. On both counts, by faith and by ancestry, I’m proud to be a boat person.

Yet the term ‘boat people’ is used by some politicians and some in the media to refer exclusively to asylum seekers who come to Australia by boat seeking refuge. The term is used to scare us; we’re told that we’re being swamped by boat people; that strong measures need to be taken or we’ll be overrun by these illegal queue-jumping economic migrants. That isn’t true, of course. Most asylum seekers actually arrive by air, not boat; the vast majority of asylum seekers who come by boat are found to be refugees; they make up a tiny, tiny proportion of Australia’s migration intake; they have the legal right to seek asylum under the Refugee Convention to which Australia is a signatory; there is no queue and if there was it would take 188 years to settle all the world’s refugees, because only 1% of them are resettled in a year. These facts are verifiable, well-known, easy to look up. Yet despite all this, it seems that a few words and phrases are enough to make Australians lose all compassion – ‘boat people’; ‘illegals’; ‘queue jumpers’; ‘stop the boats’ – and both sides of politics make use of this.

So far this year we’ve been presented with the Papua New Guinea Solution and Operation Sovereign Borders. It’s highly unlikely that either of them will go ahead as planned. In August 2011, you may remember, when all the talk was of a ‘Malaysian Solution’, a High Court decision held that under the Migration Act the Immigration Minister can only send asylum seekers to another country if (and here I’m quoting from the summary of the judgment)

the country is legally bound by international law or its own domestic law to: provide access for asylum seekers to effective procedures for assessing their need for protection; provide protection for asylum seekers pending determination of their refugee status; and provide protection for persons given refugee status pending their voluntary return to their country of origin or their resettlement in another country. In addition to these criteria, the Migration Act requires that the country meet certain human rights standards in providing that protection.

At that time the Government was arguing for the ‘Malaysia Solution’, while the Opposition was trying to get the country to return to the ‘Pacific Solution’. Neither went ahead. Many lawyers don’t think the PNG Solution or Operation Sovereign Borders will go ahead either. But politicians promote them, because they appeal to so many people.

These solutions do not appeal to Australia’s churches. Over the past few weeks the Baptists; the Jesuit Refugee Service; the new Anglican Archbishop of Sydney, Dr Glenn Davies; the Anglican Archbishop of Melbourne, Dr Philip Freier; nine Anglican welfare agencies including the Brotherhood of St Laurence and Anglicare and, of course, us, the Uniting Church, have condemned the race to the bottom on asylum seeker policy. This isn’t because the churches want to play politics or because we’re some sort of lunatic fringe. It’s because Jesus Christ is the same yesterday and today and for ever (Hebrews 13:8) and God has been telling us to welcome strangers for millennia. 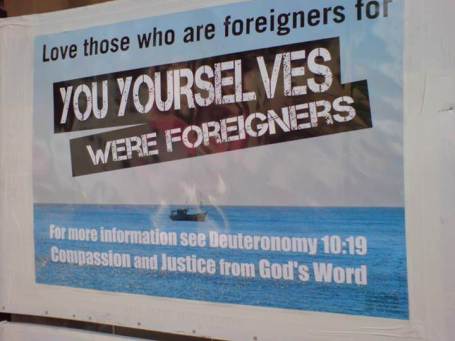 The story of the people of Israel is the story of liberation from slavery. God heard the cries of the Israelites and freed them from Egypt. And so they were told: ‘You shall also love the stranger, for you were strangers in the land of Egypt’ (Deuteronomy 10:19 ) and ‘The alien who resides with you shall be to you as the citizen among you; you shall love the alien as yourself, for you were aliens in the land of Egypt: I am the Lord your God’ (Leviticus 19:34 ). The Apostle Paul told the Romans to ‘Contribute to the needs of the saints; extend hospitality to strangers’ (Romans 12:13 ). The author of the Letter to the Hebrews, from which we heard today, wrote: ‘Let mutual love continue. Do not neglect to show hospitality to strangers for by doing that some have entertained angels without knowing it’ (Hebrews 13:1 ). They were drawing on the teachings of Jesus: ‘You shall love the Lord your God with all your heart, and all your soul, and with all your strength, and with all your mind; and your neighbour as yourself’ (Luke 10:27); ‘You have heard that it was said, “you shall love your neighbour and hate your enemy”. But I say to you, love your enemy and pray for those who persecute you’ (Matthew 5:43-44); ‘I was a stranger and you welcomed me’ (Matthew 25: 35 ); ‘Truly I say to you, as you did it to one of the least of my brethren you did it to me’ (Matthew 25:40). Welcoming the stranger and loving our neighbour, even if our neighbour differs from us in race and religion, is part of what it means to be Christian.

In the story we heard today Jesus told his host: ‘When you give a luncheon or a dinner, do not invite your friends or your brothers or your relatives or rich neighbours, in case they may invite you in return, and you would be repaid. But when you give a banquet, invite the poor, the crippled, the lame, and the blind. And you will be blessed, because they cannot repay you, for you will be repaid at the resurrection of the righteous.’ Australia is a profoundly lucky country: a wealthy country; a country in which governments change at the ballot box rather than by violence; a country in which most people can walk the streets without fear; a country in which (at least in principle) racism, sexism, religious persecution and homophobia are condemned. In world terms, we are in the position of being the hosts at a great banquet. Surely we can invite more people to share in it than we do.

Of course, we cannot invite everyone in the world who is in danger to become Australian, no matter how much we might want to when we see images of starving children or terrified civilians in warzones on TV. That argument is often made when asylum seekers are discussed: ‘we cannot help everyone’. And that’s true. But Saint Augustine gives us some advice on how we can choose who to help. He wrote: ‘Since you cannot do good to all, you are to pay special attention to those who, by accidents of time, or place, or circumstance, are brought into closer connection with you.’ Asylum seekers who land on Australian shores have been brought into closer connection with us. We can help them. And then, as Jesus said, we will be blessed. Amen.