Talk for Wisdom’s Feast: Why the Church of Latter Day Geeks

As part of Wisdom’s Feast, a conference and education event held at the Uniting Church’s Centre for Theology and Ministry, six people were asked to give short talks on something about which they felt passionate. I wasn’t given a choice as to what I felt passionate about; I was asked to speak about the Church of Latter Day Geeks. Here’s what I said:

The Church of Latter Day Geeks started as a joke.

In 2011, I went to the taping of the very first episode of comedian Adam Hills’ show, In Gordon Street Tonight. All audience members were asked to fill out a survey beforehand, and apparently Adam found the fact that I’m a Uniting Church minister who also loves Buffy the Vampire Slayer intriguing. So he made an ad for a potential ‘Church of Latter Day Geeks’ and showed  it to me. Later,  Adam told me that at the writers’ meeting he and his team had sat around  and  discussed   how   far  they  could   go  without offending me. They decided the ad would be much less offensive than their first idea, which was having a Dalek from Doctor Who randomly tum up at one of my Sunday morning services. They didn’t have much idea about the Uniting Church if they thought that would offend any of us.

Adam then asked me to lead worship wearing a geeky t-shirt, which I did. (It had a picture of the Tenth Doctor – David Tennant – and the slogan ‘Trust me – I’m the Doctor’ on it.) Since my congregations knew me that wasn’t a problem. 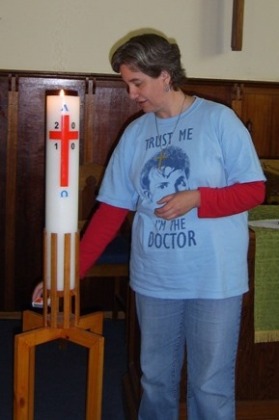 Since I hadn’t run screaming from anything up to that point, Adam and his team decided that the next step should be along the lines of what they’d wanted to do from the beginning, and asked me to organise a church service at which the entire congregation was dressed up in Sci Fi costumes. 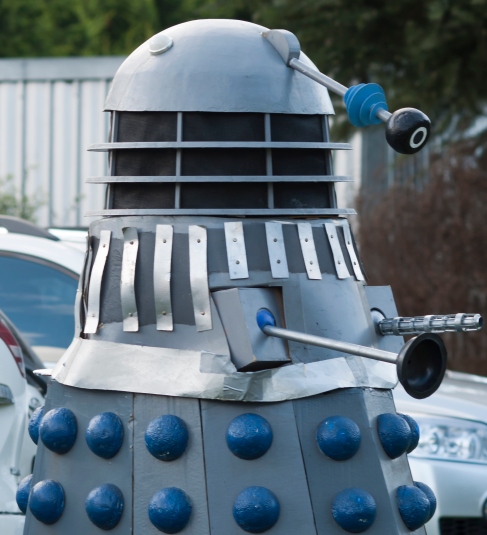 A dalek coming to church

I am a geek. I’m also an ‘acafan’ – an academically ­ minded fan. There are lots of us in Sci Fi Land. I analyse and theologise about Sci Fi and fantasy books, films, comics and television programs. My library includes books like Holy Superheroes! and The Gospel according to Tolkien and Hogwarts for Smuggles: Harry Potter and Philosophy. Before this all happened, I’d had a chapter on ‘Good and Evil in the World of Supernatural’ published in a collection of essays on the television show Supernatural. My only disappointment with that was that it was decided that I couldn’t call my essay, ‘A very Supernatural theodicy’.

I justified all this theologically by turning to J. R. R. Tolkien, the committed Catholic author of The Lord of the Rings. He described his writing of ‘myths’ as ‘sub-creation’ – creating in the image of God the Creator. In one poem Tolkien wrote:

Though all the crannies of the world we filled
with elves and goblins, though we dared to build
gods and their houses out of dark and light,
and sowed the seed of dragons, ‘twas our right
(used or misused). The right has not decayed.
We make still by the law in which we’re made.[1]

Writing about fairy tales, Tolkien said they all included a eucatastrophe, a good catastrophe, the sudden joy that comes in the midst of despair, the moment of unexpected deliverance.  The reason,  Tolkien  argued,  that fantasy writers like him are able to offer their readers this Consolation of the Happy Ending is because the Creator has already given it to us. ‘The Birth of Christ is the eucatastrophe of Man’s history. The Resurrection is the eucatastrophe of the story of the Incarnation. This story begins and ends in joy … There is no tale ever told that men would rather find was true, and none which so many sceptical men have accepted as true on its own merits.’[2] Ignore the masculine language, and so say I. So I was happy to organize a service that brought my two obsessions together.

That first service became global news. I had, of course, let the local media know the service was happening. The Macedon Ranges Leader thought it sounded like a good photo opportunity, and came to Romsey to take photos of me holding a toy lightsaber, feeling a bit silly. After that story appeared in the local paper it was picked up by the Herald –Sun, Today Tonight and by media outlets in India, Indonesia, Italy, and the USA. I even made it onto the website for The Richard Dawkins Foundation for Reason and Science. The comment was made: ‘Don’t be misled by this monstrous evil. The priest,  Avril  Hannah­ Jones,  is  far  more  dangerous  than  mere  panderers  and apologists  like  [Ratzinger] or misguided  creationists  like Beck. She wants to make religion fun!’ Several years’ later I’m still proud of that.

The service itself was a great success, if I can say that about a service I organised. You can see the report that the Adam Hills show did on it on YouTube. We filled the church with people eager to be there, and I got to preach the gospel to more people than I ever had before. I was accused of ‘trivialising the Christian faith’ and supporting Satanism, but I was defended by the Synod, the Presbytery, and other UCA members.

Since then I’ve led two more services, without the global media coverage or publicity from the Adam Hills’ – program, and they’ve continued to fill churches with geeks dressed   in costume.   Now that they’ve become annual events, I’ve tried to work out what this service’s ministry is. It’s not a ‘Fresh Expression’ of church. I call what we’re doing  ‘the  Church  of  Latter  Day  Geeks’,  because  that’s how the whole thing started, but I’m not suggesting that it is a new form of church. No one’s going to church plant Sci Fi churches around the place. I don’t even think it’s particularly missional in the way we use that term now; at least no more missional than the ordinary Sunday morning service. The service itself is an absolutely stock standard Uniting Church service. This year the readings were from the seventh book of Harry Potter, Harry Potter and the Deathly Hallows, and the second book of The Lord of the Rings, but they were also from the Book of Ruth and the Gospel according to John. The Williamstown congregation members who came to check it out were surprised at how similar it was to the service they’d attended in the morning.

So, why do I do it? What does it provide? I’ve decided that what the Church of Latter Day Geeks is doing is providing a fun service for geekish church members; providing one service a year that the teenage children of church-going parents will happily attend; -and providing one service a year that committed atheists can come to – and a dozen or so of them do attend every year, and then tell their grandparents that, yes, they have been to church.

This week I got a call from the son of a congregation member who had come to the service with his mother and his son, and so felt that he knew me well enough to ring me and tell me when his mother had a fall, even though she had told him not to bother me. I’m not sure that he would have done that if he hadn’t come to church at least once.

The  other  thing  this  service  does  is  that  it  opens doors  for me to talk  about religion  in non-church  spaces. Last Sunday I spoke about religion and Doctor  Who on a panel that was being taped for a podcast. At the end of the panel, numerous people came up to me and told me that the church didn’t seem to be as scary and disapproving as they had thought. If I could be ordained and allowed to run a Sci Fi  service,  maybe  the  church  wasn’t  so conservative  and judgmental.  When people only hear about the church from the mainstream  media, their  image of it is a conglomeration of the Royal Commission, the Australian  Christian Lobby, ACCESS Ministries, Cardinal George Pell, Archbishop Peter Jensen, and Brigadier Jim Wallace. For many people that’s not an appealing picture. The Church of Latter Day Geeks has allowed me spaces and places to say that that’s not all the church is.

1 Response to Talk for Wisdom’s Feast: Why the Church of Latter Day Geeks

Reading the books of Mabel Esther Allan in chronological order

Independent publishers of both contemporary and classic, neglected and translated books.

Putting elections under the microscope