Sermon: Putting it all together

For us, Easter, both Easter Sunday and the fifty days that follow it, is a season of great joy. But our celebration is based on our foreknowledge. When we remember Jesus’ crucifixion, we are already looking forward to his resurrection; we know that after his death comes life. But Jesus’ disciples didn’t. Jesus may have warned them of what was going to happen, but quite understandably they didn’t take it in. For them Jesus’ death was tragic and his resurrection terrifying. On Easter Sunday this year we heard Mark’s version of what happened at Jesus’ tomb, which ended with the women fleeing in terror and amazement and telling no one what they’d seen because they were afraid. Today we hear one of the three times that disciples experience the resurrection in the Gospel according to Luke, and again the immediate emotion is terror, not joy.

The last chapter of the Gospel according to Luke tells of three encounters that take place on that first day of the week, the day we now celebrate as Easter Sunday. In each of them those involved, the women at the tomb, the two disciples on the road to Emmaus, the disciples gathered in Jerusalem, move from sorrow and fear, through a new understanding of the meaning of Jesus’ life and death, to becoming Jesus’ witnesses to the world. The very last line of the gospel, which we do not hear today, tells us that the disciples’ journey ends with great joy, as they worship Jesus and bless God in the temple in Jerusalem, the place where Luke began his Gospel, when an angel appeared to a very startled Zechariah. But it takes the disciples a while to get there.

Why does it take so long for the disciples to move from desolation to joy, even after finding the tomb empty? Jesus has died and been buried, yes. But he warned them that this would happen. More than that, according to Luke, what happened to Jesus was the fulfilment of the law and the prophets. And yet, it’s only after the two men in dazzling clothes remind the women of what Jesus told them; it’s only after the disciples meet Jesus again, that they remember what he said, and believe. The journey to faith isn’t instantaneous and it isn’t simply a matter of reading and understanding the Scriptures. Faith comes from the disciples’ encounters with the risen Jesus, in which everything they’ve heard and learned is integrated with what they’ve experienced. This has remained the mission of the church down the centuries; helping people to integrate the Scriptures and experiences of God with their lives. It is because the church has done that for us that Easter is a joyful experience for us.

In Luke’s gospel, unlike Mark’s, the women who find the tomb empty do tell the others what they’ve found, but to the other disciples ‘these words seemed an idle tale, and they did not believe them’. This past Easter there was a cartoon circulating on social media of the women speaking to the Eleven, and the male disciples responding, ‘So, ladies, thanks for being the first to witness and report the resurrection, and we’ll take it from here’. It was an argument for women’s ordination, or at least against the dismissal of women’s ministry (and I’ve bought myself a copy of it). But in Luke’s telling the men don’t even believe the women. They are completely dismissed. We see this dismissal in the words of the two disciples on the road to Emmaus. 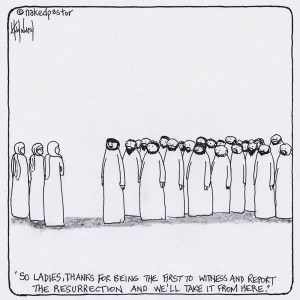 We don’t know much about these two disciples. We’re only given the name of one of them, Cleopas, and we haven’t heard of him before, nor do we hear of him again. These aren’t members of the Eleven. They’re just ordinary followers of Jesus, devastated by his death. And yet it’s them that Jesus joins on their journey. He walks with them, listening to their story, respecting their experience. These two have heard from the women about the empty tomb, but that hasn’t helped. As they explain to Jesus when he asks them why they are so sad: ‘it is now the third day since [the crucifixion] took place. Moreover, some women of our group astounded us. They were at the tomb early this morning, and when they did not find his body there, they came back and told us that they had indeed seen a vision of angels who said that he was alive. Some of those who were with us went to the tomb and found it just as the women had said; but they did not see him.’ They have heard from the women, they know that male disciples have confirmed the emptiness of the tomb, but the mere report of these facts has left them with confusion rather than faith. It’s only in the personal encounter with Jesus that faith is born.

Jesus encounters these two in the very same way that Christians continue to meet him today, in the expounding of the Scriptures and the breaking of the bread. He puts his own story into the context of all of Scripture – Moses and the prophets. As they listen to him, the disciples’ hearts burn within them, because rather than contradicting each other, the Bible and their own experience of Jesus now support each other. Hope is kindled. Rejoicing in this hope, they insist that Jesus stay with them. They offer hospitality, and through that hospitality their eyes are opened and they see Christ in the stranger they’ve welcomed. It’s an obvious hint for the church, which is invited to see God in the face of every stranger welcomed, housed and fed.

After Jesus vanishes, the two race back to Jerusalem to share their news with the others, and find that Jesus has appeared to Peter as well. As Brendan Byrne writes: ‘The community comes to full knowledge and faith when individuals and groups bring together and share their previously separate stories’ (The Hospitality of God, p. 190). And finally, we come to today’s story. When all the disciples are gathered together, Jesus appears among them. Still, they’re initially terrified, afraid that Jesus is a ghost. But by eating fish and giving them the opportunity to look at his wounds and touch him, Jesus proves both that he’s alive, flesh and blood among us rather than other-worldly, and that he’s the same person who was crucified. It’s now that Jesus opens the minds of the disciples to understand the Scriptures, an element of the story that I love, because it reminds us that faith isn’t divorced from our intellect and we don’t turn off our minds when we open the Bible or walk into church. With their minds open, the disciples are given their mission: a universal proclamation to be made to all nations.

At the beginning of Luke’s gospel the prophet Simeon rejoiced that in Jesus, salvation becomes accessible to all nations, ‘a light for revelation to the Gentiles, and for glory to your people Israel’ (Luke 2:32). Now the disciples are to share that revelation and glory, to call people to repent, to turn around and face God, to change their hearts and their lives. Pentecost and the coming of the Holy Spirit will give the disciples the power to do this, but it’s here that they are commissioned to be Jesus’ witnesses to the world.

Three groups: the women; the two disciples walking to Emmaus; the Eleven and their companions. It’s only when all of them have shared and pooled their experience that Jesus tells them that they’re his witnesses and a new community is born. Individual stories become part of the community experience, and we see the church. On Easter Sunday I said that Mark’s story of Jesus has a beginning, but no end. It simply continues, from one life to another, touching and transforming. We become part of that story as we hear it. In the same way, Luke’s story of Jesus continues in our own lives. Luke will turn from telling the gospel of Jesus Christ to telling of the Acts of the Apostles, and it’s those acts that created the one holy catholic and apostolic church into which all of us are baptised, to which we now belong. We’re united in one body with the women, the disciples on the road to Emmaus, the Eleven and their companions, and the Apostles including Matthias and Paul of Tarsus. Like them, we share our experiences of the risen Christ and integrate what we’ve learned through our lives with what we read in the Scriptures. Like them we then join in the proclamation of repentance and forgiveness to all nations. As I said on Easter Sunday, we’re called to play our own parts in the two thousand year old story of love and light and life. When Jesus says to the disciples, ‘You are witnesses of these things’ he’s saying that to us, too. Let us live our lives as witnesses to Christ. Amen.