Williamstown Uniting Church
Sermon for the Third Sunday of Lent
4th of March, 2018

Anger does not have a good reputation in Christianity. Wrath was considered by the early and medieval church to be one of the ‘seven deadly sins’. In the Scriptures God is sometimes described as angry with stubborn, foolish and greedy people, but is also praised as ‘slow to anger’ (Exodus 34.6; Numbers 14.18, Psalm 86:15) even when we deserve it. The Book of Proverbs proclaims that ‘one who is slow to anger is better than the mighty, and one whose temper is controlled than one who captures a city’ (Proverbs 16:32) and as someone with a fiery temper myself I definitely believe that. In the Letter to the Ephesians we’re told that if we are angry we’re not to let the sun go down on our wrath (Ephesians 4:26) and to put away all bitterness and wrath and anger and wrangling and slander (Ephesians 4:31). The Apostle James writes to his readers, ‘You must understand this, my beloved: let everyone be quick to listen, slow to speak, slow to anger; for your anger does not produce God’s righteousness.’ Basically, the message of the Scriptures is that God may be wrathful, although luckily for us not as much as we deserve, but we humans shouldn’t be.

Today, we hear a story of Jesus being profoundly angry, and acting on that anger. The story of the cleansing of the Temple is told in all four gospels, and the version that we hear today comes from John’s. It’s a much more vivid story than that in the three synoptic gospels: only in John do we have cattle and sheep in the Temple, as well as doves; and only in John does Jesus make a whip of cords and drive the sheep, the cattle and their vendors out. Jesus is much more vigorous and violent in John’s telling than he is in the tales told by Mark, Matthew and Luke, so it’s no wonder that it’s only in John’s gospel that the disciples are prompted by Jesus’ actions to remember the words of Psalm 69: ‘Zeal for your house will consume me’.

Jesus’ reason for cleansing the Temple in the Gospel according to John also differs from that given in the other gospels. In the three synoptic gospels, Jesus tells the crowd that they are making the Temple, which should be a house of prayer, into a ‘den of robbers’. There seem to be abuses in the Temple that need to be ended. In John, however, Jesus tells the crowd ‘Stop making my Father’s house a marketplace’. Not only does Jesus declare that he has a unique relationship with God, claiming God as his Father, but his problem seems to be not with any abuse of the sacrificial system but with the system itself. People were selling cattle, sheep and doves for sacrifices; they were offering a service to those pilgrims who had come to Jerusalem for the Passover and hadn’t brought animals with them. The money changers were replacing Roman money, with human images on it, with money which was acceptable for paying the Temple tithes. There’s no mention of any abuse of the system here; it’s the system itself that Jesus protests against.

In the conversation between Jesus and the surrounding crowd we’re given an insight into why the old order is changing. The Temple was the dwelling place of God; animals were sacrificed there because it was there that the glory of God was revealed to Israel. But when the crowd asks him for a sign, Jesus answers: ‘Destroy this Temple and in three days I will raise it up’ and John tells us, ‘he was speaking of the temple of his body’. The Word became flesh and dwelt among us, and the glory of God that was revealed in the Temple is now revealed in the body of Jesus. There’s no longer any need to sacrifice animals or pay Temple taxes when God-in-Jesus walks among the people.

Jesus is behaving very badly. He disrupts the temple system so that neither sacrifices nor tithes can be offered, and this at Passover. He claims a special relationship with God, referring to him as ‘my Father’. He makes an apparently ludicrous assertion about his ability to rebuild the Temple. In the gospels of Mark, Matthew and Luke the cleansing of the Temple takes place during Passion Week; in Matthew and Luke Jesus goes to the Temple on the very day that he enters Jerusalem in triumph, in Mark on the day after, and his behaviour there is one reason that the authorities decide that he must die. It may also partly explain the otherwise inexplicable transformation of the crowd; from singing psalms of praise as Jesus enters the city to shouting ‘Crucify him’. No one likes someone who challenges their most treasured religious rituals.

No one likes people who challenge the status quo, especially not if they do it with anger. That’s a sweeping generalisation, but there is truth in the lines of the hymn that we’ll sing at the end of today’s service, ‘Inspired by love and anger’: ‘Don’t query our position! Don’t criticise our wealth! Don’t mention those exploited by politics and stealth!’ On the 26th of January at an ‘Invasion Day March’ a young indigenous organiser of the march, Tarneen Onus-Williams, cried out (warning for language) ‘Fuck Australia, hope it burns to the ground’. In response she was targeted by politicians and members of the media, some of whom tried to have government funding withdrawn from the Koori Youth Council which had organised the march. In an interview after the march Onus-Williams said that she used that language because she was ‘sick of our people getting locked up and dying in custody, of our young people suiciding.’ Anyone who read the most recent Closing the Gap report, which basically says that the gap between indigenous and non-indigenous Australians isn’t closing, can understand that. But commentators were disgusted with Onus-Williams’ anger. What they would have said if she’d made a whip of cords we can only imagine. 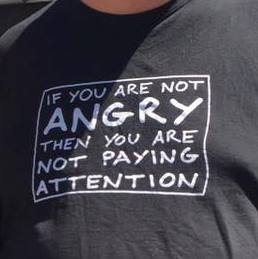 T-shirt on the torso of a ministerial colleague.

Something similar has been happening with the young people of Marjory Stoneman Douglas High School in Florida, and their response to their classmates and teachers being killed. They have been incandescent with rage. Emma Gonzales, a senior from the school, made a speech with the repeated refrain, ‘we call BS’. You can tell she’s not an Australian student because I don’t think any seventeen-year-old Australian would have had a problem with saying ‘bullshit’ in that context. Again, one of the ways in which those students have been attacked is by people saying their anger is inappropriate. Professional media personalities on Twitter have condemned them for the way they talk to and about adults, and for lecturing and ridiculing senators on television. Even after the deaths of seventeen people, some people in power have used that power to condemn not the murders but the people expressing their anger about them.

‘Making a whip of cords, [Jesus] drove all of them out of the temple, both the sheep and the cattle. He also poured out the coins of the money-changers and overturned their tables.’ Jesus expressed anger in a way that would have outraged the media commentators and politicians of his day. In fact, we know that it did outrage them. In Jesus the Church believes we see both the fullness of humanity and the fullness of divinity; he is truly human and truly God. The Scriptures talk about times when the wrath of God is appropriate; in Jesus’ actions in the Temple we see that sometimes human wrath is equally necessary. The Apostle James might tell his readers that ‘your anger does not produce God’s righteousness,’ but that isn’t true at all times and in all places. Sometimes, when facing the injustice of the world, it’s right to be inspired by both love and anger.

At the very least, when young people facing the injustice of the world express anger at that injustice, even in language we much more mature people find intemperate, we could attack the injustice and not them.