Posted on September 16, 2017 by Avril Hannah-Jones

Things happen that might be pure coincidence, but might also be the result of nudges from the Holy Spirit. Over the past few weeks many Christians in Australia have been thinking and arguing about how to respond to the postal poll on the marriage laws. At the same time, the Lectionary has given us a series of readings from Paul’s Letter to the Romans in which Paul talks about how Christians are to live together. Today’s reading specifically talks about how Christians are to live with disagreement. Most people will see that as a coincidence, but I prefer to see it as a hint from the Holy Spirit.

Last Monday the ABC television program Lateline had an episode on the various religious responses to the upcoming marriage poll, with a panel made up of a Rabbi, an Anglican priest, a spokesman for the Islamic Council of Queensland, and a Jesuit. Before that panel, which wasn’t actually a set-up for a joke no matter how much it sounds like one, there was an interview with Rev. Dr Robyn Whitaker, a Uniting Church minister and biblical scholar who explained why she will be voting ‘yes’ in the postal poll. There was also footage from the small group discussions that the recent Victorian and Tasmanian Synod meeting had about marriage. The moment that I found most interesting and encouraging wasn’t Robyn explaining her ‘yes’, or Colleen Geyer, the General Secretary of the Assembly, asking Synod members to “listen with love and respect and open your hearts to those who are sharing with you”. I expected both of those. What I found most interesting and moving was a vox pop Lateline conducted with a member of Synod, Rev. Sherrin Jackman, in which she said:

I personally feel uncomfortable with marrying a same-gender couple, but – and that’s just my personal view, my personal theological view, I suppose. But if someone came to me I would be quite happy to refer them on: to say, “OK, I may not be able to marry you but I know other people who would be happy to do that for you. Let me introduce you to them. Let me help you to find someone who will do that for you.” 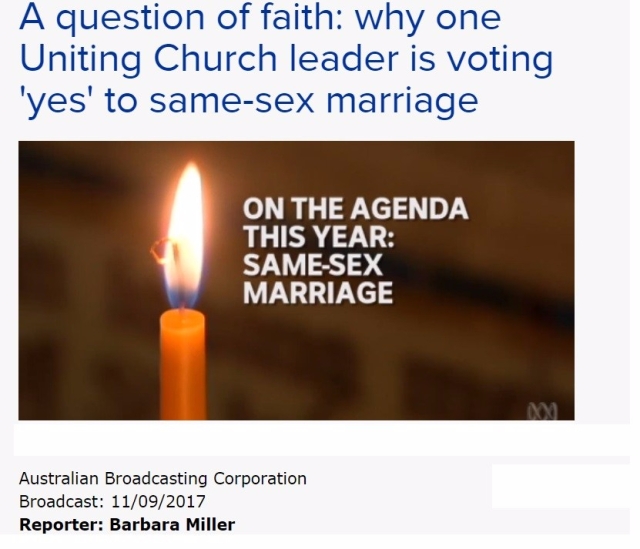 I disagree with Sherrin on the question of whether or not to marry a same-gender couple. I hope that one day the church will let me do it. But I absolutely agree with her on how we in the Uniting Church are to negotiate our differences.

In his Letter to the Romans, for the first time Paul isn’t writing to a community he founded. He’s writing to a strange church in order to explain his understanding of the gospel, rather than to answer particular questions. So in today’s reading we might be seeing Paul attending to issues that he has heard are of concern to the church in Rome. Or he might simply be trying to prevent problems by pre-emptively addressing issues that have caused divisions in other Christian communities. Either way, I think that Paul is addressing a community that he knows are made up of ‘the strong’. I can’t imagine that Paul would describe one group of Christians as ‘the weak’ if he was directly addressing them. Paul was trying to ingratiate himself with the church in Rome through this letter; addressing a significant part of that church as ‘weak in faith’ would be no way to win them.

When it comes to the first issue that Paul is addressing, what food Christians may eat, we know that Paul considers himself to be among the ‘strong’ in faith. A few verses further on from this reading he writes: ‘I know and am persuaded in the Lord Jesus that nothing is unclean in itself.’ Paul is writing before the gospels themselves were written down, but he’s clearly drawing on the oral tradition of Jesus saying things like: ‘Do you not see that whatever goes into a person from outside cannot defile, since it enters, not the heart but the stomach, and goes out into the sewer?’ That’s from the Gospel according to Mark, and Mark then writes: ‘Thus he declared all foods clean.’ (Mark 7:18-19) But not all people agree with Paul. Apparently: ‘Some believe in eating anything, while the weak eat only vegetables.’ We know that in Corinth, where the temples sold the meat that had been sacrificed to idols, some members of the church were afraid that eating this meat would be idolatry. (1 Corinthians 8). There might have been a similar problem in Rome. Or Jewish Christians living in a non-Jewish society might have been vegetarian to make sure that they weren’t eating meat that had been improperly killed. In the Acts of the Apostles the leaders of the Jesus movement in Jerusalem send a letter to the Gentiles converted by Paul telling them ‘that they should abstain from what has been sacrificed to idols and from blood and from what is strangled and from fornication.’ (Acts 21:25) It might be that those who are eating only vegetables are trying to make sure that they follow these instructions.

Then there is the question of observing particular days as special. We’re not quite so sure what Paul felt about this himself. This could be a question of Jewish Christians, or Gentile Christians who had been God-fearers, continuing to observe the Sabbath and Jewish festivals, which to Gentile Christians weren’t as important. Or the controversy might have been about the pagan understanding that some days are considered luckier than others, although that’s less likely. Paul hasn’t given us enough information to be sure.

Whatever was behind these distinctions, Paul is very clear on how the Romans should respond to them. The Romans are to welcome those who disagree with them into their community. Neither of these issues is to divide those who follow Christ, because their mutual submission to Christ unites them. Paul doesn’t suggest that the church needs to have a single set of practices. In fact, he suggests that that would be wrong; people are to follow their conscience: ‘Let all be fully convinced in their own minds.’ What is important is that everyone eats or abstains from eating, or observes particular days or doesn’t observe those days, in honour to the Lord and giving thanks to God.

This is because all of us are fellow slaves in the service of the one Lord. It’s not up to us to judge each other; judgement belongs to God; ‘why do you pass judgement on your brother or sister? Or you, why do you despise your brother or sister? For we will all stand before the judgement seat of God.’ And, as Paul has spent most of the letter telling us, when we do face God’s judgement we already know that we will be judged righteous not because of anything we do or don’t do, but through Christ.

The passage about life and death, which is often quoted at funerals, might be from an early Christian hymn. I find it extremely comforting, and I often read it in the cemetery after the coffin has been lowered: ‘We do not live to ourselves, and we do not die to ourselves. If we live, we live to the Lord, and if we die, we die to the Lord; so then, whether we live or whether we die, we are the Lord’s. For to this end Christ died and lived again, so that he might be Lord of both the dead and the living.’ It is as comforting as nothing ‘will be able to separate us from the love of God in Christ Jesus our Lord,’ which Paul wrote earlier in this letter. But Paul isn’t just reassuring us here. He is reminding us about why we shouldn’t judge one another: one day each of us will all stand before the judgement seat of God.

Given all this, and given that Jesus also told us ‘do not judge, so that you may not be judged’ (Matthew 7:1) it’s a bit surprising that we Christians are such a judgemental lot. But I don’t think we can deny it; we love judging both our fellow Christians and those outside the community. We are only too ready to point out the speck in our brother or sister’s eye. Paul has no time for that; for us to peer sideways at each other when we should be united in looking at God.

This doesn’t mean that as Christians we aren’t to disagree with each other. There will be things we disagree on, and in the Church throughout the centuries there have been many. And there are times when we do need to condemn the actions and the beliefs of our fellow Christians. Paul writes: ‘those who abstain must not pass judgement on those who eat,’ but I don’t think that meant the Confessing Church in Nazi Germany should not have said loudly and clearly that they believed aligning the church with Hitler were wrong. In the same way, I don’t think it was wrong for those churches who opposed apartheid in South Africa to declare it. From those cases the global church received the Barmen Declaration of 1934 and the Belhar Confession of 1982 and we are a better church because of them. There are times when this type of judgement is a necessary outcome of following Jesus. But what Christians cannot do, even when condemning actions and beliefs, is despise and reject each other.

Martin Luther King gives us one of the best examples of this. He had no difficulty at all in condemning racism and segregation, and calling on white Christians who failed to love their black neighbours to repent. But he was also very clear about how that could be done in love: through forgiveness; by recognising ‘that the evil deed of the enemy-neighbour, the thing that hurts, never quite expresses all that he is’; by not seeking ‘to defeat or humiliate the enemy but to win his friendship and understanding’.[1] People like Nelson Mandela and King himself have shown us how to do that.

We don’t get to judge other people as ‘not Christian’ because they disagree with us. It’s a constant temptation, especially when other Christians hold beliefs that seem to us to be utterly incompatible with Christianity. We can argue against beliefs and actions; we can point out where we think they contradict our understanding of the gospel. But we can never say to our brothers and sisters that they aren’t our brothers and sisters. We can never deny that we are all members of the same one holy catholic and apostolic church; all part of the body of Christ. It’s a cliché that we can’t choose our family, and that applies to our church family as well. After all, if God has welcomed even us into the family, how can we deny that welcome to others?