Sermon: These things are not ‘sent to try us’

Sermon for Williamstown
First Sunday of Lent, 5th of March, 2017 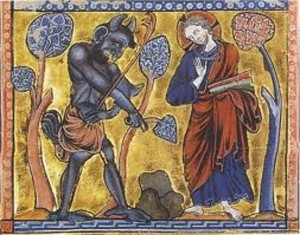 There is a comment that is occasionally made in my family: ‘Ah, well, these things are sent to try us’. It’s only ever used about something minor, traffic snarls, for example, or my littlest niece taking the scissors to her hair, and always as a joke. But there is a stream of theology that takes seriously the idea that difficulties are sent to us by God to test us. It has variations in which people say that God never gives us more tragedy than we can bear, or that God particularly tests those people whom he particularly loves.

It’s a theology that is sometimes used to comfort people who are suffering, suggesting that they are particularly strong people or particularly loved by God. And there is some biblical warrant for it. The biblical book of Job begins with a folktale that describes that exact scenario:

The Lord said to Satan, ‘Have you considered my servant Job? There is no one like him on the earth, a blameless and upright man who fears God and turns away from evil.’ Then Satan answered the Lord, ‘Does Job fear God for nothing?  … stretch out your hand now, and touch all that he has, and he will curse you to your face.’ The Lord said to Satan, ‘Very well, all that he has is in your power; only do not stretch out your hand against him!’

In the book of Proverbs we read, ‘My child, do not despise the Lord’s discipline or be weary of his reproof, for the Lord reproves the one he loves, as a father the son in whom he delights’ (Proverbs 3:11-12) and that particular proverb is quoted in the New Testament Letter to the Hebrews. (Hebrews 12:5-6) where God’s disciplining is seen as evidence that the early Christians are his children, because only a father would worry about reproving his children.

Maybe this ‘testing’ theology is comforting for some people, offering them a sense of meaning in the midst of tragedy. But I don’t believe in a God who sends things to try us, and I definitely do not believe that God never ‘sends’ us more difficulties than we can endure. The crimes against humanity of the last century or so, and the rate of suicide here in Australia, should completely disabuse us of both those notions.

But in today’s reading from the gospel according to Matthew we do find one person being deliberately tested by God – the Son of God. Today’s passage is often described as the temptation of Jesus, but one commentator I read this week says it should more accurately be titled the testing of God’s Son. Listening to it we need to remember God’s testing of the people of Israel in the desert. Jesus in his testing is reliving the testing they received during their forty years of wandering.

The Book of Deuteronomy was written as the last instructions that Moses gave the people of Israel before his death and their entrance to the Promised Land. In it, the author reminded the people of those forty long years: ‘Remember the long way that the Lord your God has led you these forty years in the wilderness, in order to humble you, testing you to know what was in your heart, whether or not you would keep his commandments.’ (Deut 8:2) The people of Israel failed this test. As the Book of Deuteronomy reminds them: ‘He humbled you by letting you hunger, then by feeding you with manna, with which neither you nor your ancestors were acquainted, in order to make you understand that one does not live by bread alone, but by every word that comes from the mouth of the Lord.’ (Deut 8:3) They are instructed: ‘Do not put the Lord your God to the test, as you tested him at Massah,’ (Deut 6:16) and ‘The Lord your God you shall fear; him you shall serve, and by his name alone you shall swear.’ (Deut 6:13)

As they begin a new phase of their life, living in the Promised Land, the people of Israel are reminded of their previous failures, and warned not to repeat them. The entire Book of Deuteronomy is based on the fact that the people of Israel are loved by God; that Israel is the Son of God; and that as God’s beloved Son Israel should trust God. Sadly, it’s also based on that fact that when tested in the past, Israel failed to show this trust.

Now Jesus, himself the Son of God, relives Israel’s experience, although his testing takes place over forty days rather than forty years. It’s the Spirit who leads Jesus into the wilderness, and She leads him there specifically to be tested. It’s important to remember that like the people of Israel, Jesus is ultimately being tested by God, rather than by the devil; tested not because he’s turned away from God, but because he’s following God’s will; not because he is disobedient, but because he is obedient. It’s also important to note that the testing don’t involve anything obviously evil. Jesus is being tempted to be relevant, to be spectacular, to be powerful. In a world of hunger, why not turn stones to bread? In a world of indifference, why not do something as spectacular as leaping off the temple to command attention? In a world of violence and slavery and oppression, why not, as the Son of God, just take over? There’s nothing obviously wrong about Jesus doing any of this. Indeed, later Jesus will miraculously feed thousands; he will do miracles; and ultimately he will be given ‘all authority in heaven and on earth’. Every point the devil makes is true; Jesus is the Son of God and he can do all this. Why not do it now?

Because that is not God’s way of salvation. Jesus is at the beginning of his ministry, on a journey that will lead him to the cross. The journey on which God sends his Beloved Son is one of humility and weakness. It leads to the scandal of the Messiah being executed like a common criminal. Jesus, although he is, as the devil keeps reminding him, the Son of God, does not seek equality with God. Jesus recognises that there must be no forcing of God’s hand, no testing of God. Jesus doesn’t need signs and wonders to know that God loves him.

Paragraph Three of the Uniting Church’s Basis of Union has been called ‘the basis of the Basis’ and it contains a wonderful summary of what the church believes about Jesus. One of the things it says is: ‘[Jesus] himself, in his life and death, made the response of humility, obedience and trust which God had long sought in vain.’ God tested the people of Israel in the wilderness and they failed the test. God tested Jesus in the wilderness and he passed. In Jesus we are given a role model and example of what obedience to God looks like, something to which we can aspire.

Jesus tells the devil: ‘it is written, “Do not put the Lord your God to the test.”’ God does not put us to the test, either. That is not the nature of our relationship between God and us. For that, we give thanks to God. Amen.

This entry was posted in Sermons and tagged Lent, Lent 2, Matthew 4:1-11, Temptation, Year of Matthew. Bookmark the permalink.