Sermon: The Creator of the Cosmos is our Next of Kin

Posted on September 13, 2015 by Avril Hannah-Jones

I’m going to do something a bit unusual this morning; I’m going to preach a sermon on the Psalm of the day. This is unusual, because the psalms themselves are unusual parts of the Scriptures. Most of the Bible is made up of writings that we consider to be words from God, if not the Word of God. The Book of Psalms is somewhat different. The psalms are prayers, offerings of humans to God. And that’s how we usually use them. We sing them or pray them in worship or alone, offering them as our words to God. We don’t principally listen to them as God’s words to us. That’s what I want us to do today; treat today’s psalm like any other part of Scripture, as a poem through which we hear God talking to us.

I want to do that with today’s psalm because it’s one of the psalms that I love most. C. S. Lewis said of it that: ‘[Psalm 19 is] the greatest poem in the Psalter and one of the greatest lyrics in the world.’ I’m not sure I completely agree with him, but that’s because I can’t choose just one psalm as ‘the greatest’. I do agree that this psalm is a beautiful poem. The creators of the Revised Common Lectionary also seem to agree with Lewis, because the lectionary gives us this psalm once every year in ordinary time, again every year in the Easter Vigil, and then during Lent in Year B and for Epiphany in Year C. So we listen to it a lot. We hear it today because in this part of ordinary time we’re working our way through some of the wisdom literature, the Song of Songs and Proverbs and the Book of Job, and this psalm is a wisdom hymn.

We don’t know anything about the author of this psalm, or the date it was written. Commentators don’t even agree on whether this is one psalm or two hymns of praise, one to creation and one to the law, that have been joined together. Whether it was originally one hymn, or two, what the psalm does now is remind us of glory of God and where we can see that glory revealed.

In the first part of the psalm, the creation hymn, tells us that all of nature is in the service of God. Nature does two things: it sings praises to God, and it reveals God to humanity. If human beings weren’t around, or if we all turned away from God, God would still be praised. The heavens, the sky, day, night – all of these honour God. They worship, paradoxically, with silent noise. The heavens are speaking; day is talking to day and night to night, but all without speech and words. But we can hear this silent speech, if we’re open to it. Lots of people talk about being in touch with the divine when they experience nature. This psalm explains why – creation both reveals God and worships God. It also explains why Christians are so often environmentalists; we know that the non-human creation is as important to God as the human, and that it joins with us in praising God. Humanity and nature are part of the one congregation worshipping the Creator. 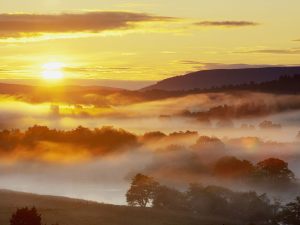 In this first part of the psalm there’s no mention of humanity; it is just Creator and creation. We appear in the second part of the psalm, which talks about the wonders of the Law. Christians may have trouble understanding this part of the psalm because of our historical understanding of a contrast between law and grace. To quote the Apostle Paul: ‘The letter kills, but the Spirit gives life’ (2 Corinthians 3:6b). But the torah praised by the psalmist has nothing to do with the letter that kills. For the psalmist, the law is the point at which an encounter takes place with the living God. The torah is the revelation by which God revives, enhances and guides human life. The torah is the mutual relationship between God and humanity. Living by the torah constitutes righteousness, life as God intends it. In praising the law, the psalmist praises the God revealed in the law. For the psalmist, the torah is playing the role that Jesus, the Word of God, plays for us.

It might seem that there’s an enormous distinction between the first and the second parts of the Psalm, between the hymn to creation and the hymn to the law. But the two are intimately connected. As the sun dominates the sky, so the torah dominates human life, and as the sun is both welcoming and terrifying, so is the torah. There is no life without either.

Now we come to the third part of the psalm. The psalmist moves from a general description of the wonders of the torah to the implications of the torah for their own life: ‘in keeping them there is great reward.’ This reward is their ability to be in relationship with God. The psalmist becomes very personal, addressing God directly and asking that they be cleared from hidden faults. In faith that God will grant their request, the psalmist rejoices that they will be blameless and innocent.

The psalmist is aware of both their human weakness and of God’s grace. They are aware that they cannot live righteously by torah alone. If they seek to be blameless, which does not mean to be sinless, then they must live in dependence on God. It’s interesting that the terms for God become more intimate as the psalm has gone on. At first God is referred to as El, the Creator. Then God is referred to as YHWH, translated as ‘the Lord’, the God who is in covenant relationship with Israel. Finally, God is referred to as go’el, Redeemer, the psalmist’s next of kin. The psalm reminds us of one of the most astounding elements of our faith. We believe that the God who created the universe and to whom the heavens bear witness is also the God who loves human beings, us, as God’s children, members of God’s family.

We can offer this psalm to God as prayer. In fact, I do every Sunday. As I begin a sermon I borrow a modified ending of the psalm: ‘Let the words of my mouth and the meditation of all our hearts be acceptable to you, O Lord, our strength and our redeemer’. (It’s the preacher’s ‘Get out of jail free’ card.) But we can also listen to this psalm as words from God to us.

This one short psalm has so much to tell us. It tells us that creation is a revelation of God and joins with us in worshipping God. We need to respect the non-human creation as fellow worshippers with us in God’s great congregation. The psalm tells us that living in right relationship with God is more to be desired than fine gold and sweeter than honey. This is true wisdom; to learn from our faith how to truly live. But most wonderful of all, the psalm reminds us that: ‘the creator of the universe, the giver of the perfect Torah, has come near and revealed himself to his people as rock and redeemer.’ (J. Ross. Wagner, ‘From the Heavens to the Heart: The Dynamics of Psalm 19 as Prayer’.) This is the message that was brought to us by Jesus, the Messiah and the Son of Man. The Psalm reminds us that this has always been the message of our faith; centuries before the Incarnation in which the Word and Wisdom of God took on flesh and dwelt among us, the psalmist knew this. We are welcomed into, part of, the family of the Creator of the cosmos. We can look up at heavens and the firmament and know that we are just as important to God as they are. The universe is vast, but we aren’t alone in it. Thanks be to our rock and redeemer. Amen.

This entry was posted in Sermons and tagged creation, Psalm 19, Torah, Year of Mark. Bookmark the permalink.