Jonathan is ‘the friend few of us deserve but most of us would dearly love to have’.[1] The friendship between Jonathan and David can be compared with the love between David’s great-grandmother, Ruth, and her mother-in-law Naomi, in which Ruth makes the wonderful declaration that: ‘Where you will go, I will go; where you lodge, I will lodge; your people shall be my people and your God my God. Where you die, I will die – there will I be buried’; a commitment so profound that this promise from one woman to another is often read at weddings. It’s tempting to think that David inherited his capacity for inspirational friendship from her.

The friendship between David and Jonathan is described in language as beautiful and meaningful as the commitment Ruth makes with Naomi. In today’s reading we are told that: ‘the soul of Jonathan was bound to the soul of David and Jonathan loved him as his own soul … Jonathan made a covenant with David, because he loved him as his own soul’. The love between Naomi and Ruth is counter-intuitive, they are Jewish mother-in-law and Moabite daughter-in-law, and it demands great sacrifice from Ruth, who leaves her own country and her own people to accompany Naomi to Judah. The love between Jonathan and David is just as counter-intuitive, and demands equally great sacrifices.

To understand exactly how remarkable the friendship between Jonathan and David is, we need to know a little about Jonathan. He first appears in the Book of Samuel as a successful warrior against the Philistines, defeating their garrison at Geba. (1 Sam 13:3) We are then told that he is Saul’s son, and so potentially Saul’s heir. Jonathan and his armour-bearer go alone to another Philistine garrison, because Jonathan trusts that Yahweh will give the Philistines into Israel’s hands, which Yahweh does. Later, Saul makes an oath, cursing anyone who eats food before the battle is over. Jonathan doesn’t hear of this oath, so when he comes upon some honeycomb he eats the honey. When Saul discovers this, Jonathan is willing to die, and Saul is willing to kill him, but the people protest: ‘Shall Jonathan die, who has accomplished this great victory in Israel? Far from it! As the Lord lives, not one hair of his head shall fall to the ground; for he has worked with God today.’ (1 Sam 14:45) Jonathan is Saul’s eldest son; he is a mighty warrior against the Philistines; God is with him; and the people of Israel love him. Yet, when David appears, the youngest son of Jesse the Bethlehemite, the boy who tends the sheep, Jonathan willingly takes second place.

Last week we heard about Samuel’s secret anointing of David. From now on the spirit of the Lord is on David, he is in one sense already Israel’s king. But to all appearances Saul still rules, and there is a long way to go before David’s rule is completely affirmed. That affirmation begins here, with the performance of Jonathan’s love. The Bible tells us that: ‘Jonathan stripped himself of the robe that he was wearing, and gave it to David, and his armour, and even his sword and his bow and his belt.’ (1 Sam 18:4) When David faced Goliath, Saul gave David his own armour, but David refused it because he couldn’t walk in it, and instead took five smooth stones and his sling. Now David accepts from Jonathan what he wouldn’t take from Jonathan’s father, and with Jonathan’s robe and armour he also takes Jonathan’s place. The robe is a symbol of Jonathan’s royalty; the armour a symbol of his leadership in battle; David takes both, and his new roles are confirmed when Saul takes David into his house, not letting David return to Jesse, and sets David over the army. All the people approve, and David is successful because the Lord is with him. David is now well on his way to the kingship; his public recognition beginning with Jonathan’s love and Jonathan’s gifts. 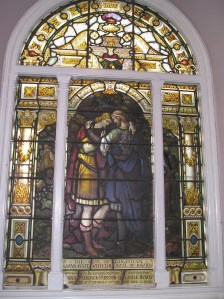 Saul has the opposite reaction. Initially he welcomes David, adopts him into his household, and makes him commander of his army. Then he becomes angry with David and, as he sees that God is with David, begins to fear him. Jonathan and David don’t have much time to enjoy their friendship; soon Saul tries to kill David and Jonathan mediates between his friend and his father. At first he is successful; later David has to flee. Jonathan stays with his father, but continues to love David; at their last farewell David and Jonathan kiss each other and weep together, and the Bible tells us that ‘David wept the more’. (1 Sam 20:41) But Jonathan says: ‘Go in peace, since both of us have sworn in the name of the Lord, saying, “The Lord shall be between my descendents and your descendents, forever”.’ (1 Sam 20:42)

Jonathan is not only able to love his friend against his own interests, he is also able to let his friend go, knowing that they are linked by God. This is an amazing relationship, a friendship in God that overcomes the boundaries of birthright and birthplace and conventions of romance and traditions of loyalty. This astonishing friendship is as important as the anointing by Samuel in setting David on the path to kingship. In his own way, Jonathan too is a prophet.

How many of our own friendships can live up to this biblical model? I know, for myself, I am not good at taking second place, even when I’m taking second place to someone I love. I definitely struggle to be a friend in the model of Jonathan even if, like Jonathan, I can accept the friends I have as gifts from God.

I have preached before on friendship as the most important Christian form of relationship. All Christians are invited to be friends of Jesus and, through Jesus, friends with each other. In the story of David and Jonathan, as in the story of Ruth and Naomi, we see that Jesus’ ancestors valued friendship as highly as Jesus himself did. We are called to follow in the footsteps of them all, and be friends with people across the barriers of age and birthplace and tradition.

Yesterday was World Refugee Day. The past week has been Refugee Week. According to the United Nations more than 60 million people are currently displaced by war, conflict or persecution. The world is in the middle of the largest refugee crisis since World War Two. I’ve been commemorating Refugee Week by living on the rations that a Burmese refugee would receive in a camp on the Thai-Burma border in the Act for Peace Ration Challenge. Last I’d heard those of us doing the Ration Challenge, and the incredibly generous people who sponsored us, have raised $350,000, which will feed 1620 Burmese refugees for a year.

I believe that most Australians are generous people, who want to support refugees and asylum seekers. But both major political parties seem to want to convince us that we’re under attack from asylum seekers, who they call illegal boat people. We are the only country in the world that locks up asylum seeker children as a first resort. Over the past year the number of children in detention has dropped, but the length of time they have spent in detention has increased. We are now locking up children for years. 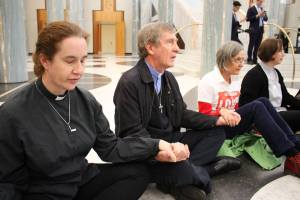 So the other way I commemorated Refugee Week was by singing and praying in the Marble Foyer of Parliament House in Canberra on Wednesday. About forty priests, nuns, Salvation Army officers, ministers, and lay leaders entered Parliament House in groups of three and four, met under the clock at noon to sing, and then sat down and prayed – for about half-an-hour, until the Security Guards got tired of us and carefully picked us all up and escorted us outside. Singing and praying to ask politicians of both major parties to release all children from immigration detention seemed to me to be an appropriate way to acknowledge Refugee Week. But this prayerful protest with an ecumenical group also seemed to me to be the perfect way to celebrate the Uniting Church’s birthday, which is on the 22nd of June, tomorrow. This, I believe, is who we are as the Uniting Church. We are a church that joins with other Christians to act for justice and peace. There are so many reasons that we do this, but one of them is that by welcoming refugees we are following in the footsteps of David and Jonathan, friends despite everything that should have separated them.