What on earth can we do with today’s reading from the book of Genesis, the Akedah or binding of Isaac? The Revised Common Lectionary, which leaves out other stories in Genesis like the rape of Dinah and the revenge taken by her brothers;[1] the attempt by the men of Sodom to rape two of God’s messengers;[2] and the incest between a drunken Lot and his two daughters that was the origin of the people of Moab and Ammon;[3] includes this passage of attempted child sacrifice for our instruction. Genesis has many stories that are distinctly unedifying, it’s definitely not a safe book for children to read, but the lectionary passes over most of them in silence, and we never hear them read out in church. So why is this story part of the lectionary? Surely, child murder, even when prevented at the last minute, is at least as abhorrent as rape and incest. On this topic I could almost agree with Richard Dawkins, who uses the binding of Isaac as an example of the cruelty of religion. In The God Delusion he writes: “this disgraceful story is an example simultaneously of child abuse, bullying in two asymmetrical power relationships, and the first recorded use of the Nuremberg defence: ‘I was only obeying orders’. Yet the legend is one of the great foundational myths of all three monotheistic religions.”[4] But I differ from Dawkins in one important point. He implies that Jews, Christians and Muslims blithely read this story and accept it, thus accepting child abuse, bullying and blind obedience as part of our faith. The absolute opposite is true.

The story of the binding of Isaac is part of the Hebrew Scriptures, and so Jewish scholars have spent even more time questioning it than Christians have. The book I read to the children today, The White Ram, gives us one way that Jewish Midrash has explained what’s happening. God never intended Isaac to be sacrificed, and so created a ram to be the substitute. More than that, God knew that Abraham was faithful, and merely asked him to sacrifice his son in order to provide an example of faith. Apparently this was the position of the Medieval Jewish writer Maimonides, who said that God used Abraham to serve as a test case of the extreme limits of the love and fear of God. Not all Jewish responses to this story are so exculpatory. There is apparently a Yiddish folk tale that asks: Why did God not send an angel to tell Abraham to sacrifice Isaac? The answer is that God knew that no angel would take on such a task. Instead, the angels said, “If you want to command death, do it yourself.”[6] Yiddish folktales are full of pithy wisdom!

Christians believe that Abraham is our ancestor in the faith, by faith. For the Apostle Paul, Abraham was the supreme example of someone saved by faith, rather than by the works of the Law. In the Letter to the Romans Paul quoted from Genesis: “Abraham believed God, and it was reckoned to him as righteousness” as an argument that it is faith that leads to right relationship with God, and not works. But the story Paul was quoting is from earlier in Genesis, when the Lord promises the childless Abraham that he will be the ancestor of as many descendants as there are stars in the sky, and Abraham believes him. Paul made no mention of Abraham’s later act of faith in God; binding his beloved son Isaac to the wood of the burnt offering. The only mention made of that story in the New Testament is in the Letter to the Hebrews, where the author says of Abraham: “He considered the fact that God is able even to raise someone from the dead—and figuratively speaking, he did receive him back.”[7] The author of Hebrews, writing post-resurrection, seems to be explaining this story by saying that Abraham could also have looked forward to resurrection. But that seems to me to be a very retroactive justification.

Are we meant to see in Abraham’s willingness to bind Isaac an act of faith as memorable and exemplary as his willingness to believe that he would have many descendants, despite being childless and elderly? Is this a story of the lengths to which faith in God is meant to take the faithful? Can we read it that way?

Abraham has followed God in faith, both in leaving his home to journey to the country that God promises him, and in believing that he will have descendants, despite all the circumstances that seem to make this impossible. But Abraham has not always trusted God. Twice he has lied about Sarah being his wife, claiming that instead she was his sister, because, as he explained to her on one occasion: ‘I know well that you are a woman beautiful in appearance; and when the Egyptians see you, they will say, “This is his wife”; then they will kill me, but they will let you live. Say you are my sister, so that it may go well with me because of you, and that my life may be spared on your account.’[8] Not the actions of someone who has complete faith in God! Maybe God does need to test Abraham, to be absolutely sure that He has made a covenant with the right human family. We read back into this story the belief that God knows everything, and so must have known what Abraham would do, but that’s not the way this story tells it. It’s a real test; God doesn’t know beforehand how it will end.

This test is a harder one than the command to Abraham to leave his home, or the promise that he will have a son. Three times Abraham’s previous possible heirs have been rejected. His nephew Lot has moved away;[9] God has rejected Abraham’s servant Eliezer as a possible heir;[10] and Abraham’s other son, by Sarah’s slave girl Hagar, Ishmael, has been lost to him.[11] Abraham is being asked to sacrifice the only heir he has left and the most beloved one, Isaac. It is easier to have faith when you are being offered a new beginning – a new land or a son; it is harder to have faith when you are being asked to give up all hope. And yet Abraham obeys God’s command in faith that “God himself will provide”. When God told Abraham that he was going to destroy Sodom, Abraham negotiated with God until God agreed that Sodom would not be destroyed if it contained fifty righteous men; then forty-five; then forty; then thirty; then twenty; and finally ten, with the Lord eventually agreeing “For the sake of ten I will not destroy it.”[12] Abraham has proved himself a shrewd bargainer with God. But on this occasion he says nothing.

Does Abraham believe that God will provide a substitute for Isaac? One commentator I read argues that Abraham trusts in God to save Isaac, that “God will find a way through this dark moment”.[13] But most others agree that Abraham believes that he will have to kill Isaac.

Then, at the last minute, the reprieve happens. The angel of the Lord stops Abraham before the killing blow; Abraham has proved his faith. And there, in the thicket, is a lamb; God has provided the sacrifice. Abraham acted with complete faith in God, and the God who demanded everything of Abraham up to and including his beloved son, provided Abraham with everything he needed. We could read this as a story about the depths to which faithfulness and righteousness can be pushed, and the suffering that can go with the struggle of faith. We could read it as a reminder that God will be God and that we owe God everything. We could read it as reassurance that even in our darkest hours God will provide. That would be one way of dealing with this story.

But I’m not sure I can do that. I don’t want to overcome the horror of this story to find a moral message for us about faith and providence. For Christians, the binding of Isaac foreshadows the story of the crucifixion and resurrection of the beloved son, the son of Abraham, the son of David, the Son of God.[15] Maybe, seeing in this story the echo of the crucifixion, we are too ready to accept the possibility of a father sacrificing a son. I prefer a Jewish reading articulated by Rabbi Hyim Shafner,the Rabbi of Bais Abraham Congregation in St. Louis, Missouri, who, like me, can’t accept any of the usual analyses of this story. He writes:

I concluded that none of the apologetic paths were satisfactory and that the real test was for Abraham to confront God as he did at Sodom, thus teaching his children “righteousness and justice”  and ultimately to say “no” to God.  Perhaps, on some level in the narrative of the Akedah, Abraham failed the test.  I would suggest this is why God never speaks to Abraham after commanding him to take Isaac as a burnt offering.  In the end of the story an emissary angel speaks to Abraham – but where is God?  Why doesn’t God just speak directly to Abraham?

… Perhaps if we begin to see the Akedah as a test in which the right answer is to protect an innocent child rather than sacrifice him in obedience to God, our world might be a bit different, perhaps for the better.[16]

I’m with the Rabbi. Abraham failed the test by failing to show compassion to his son; by failing to argue back when God apparently demanded Isaac’s death. The message of this story shouldn’t be that our faith in God must be unquestioning, willing to sacrifice even those we love most when God seems to demand it. Instead, I think the message should be that all our children, every single child in the world, are infinitely beloved and to be protected. 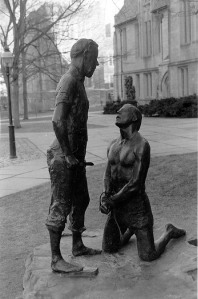 The photo on the screen is of a sculpture by George Segal in the grounds of Princeton University. It is called “Abraham and Isaac” but it is also a memorial to the four students killed and nine wounded on the campus of Kent State University when the Ohio State Guard opened fire on a group of unarmed student protesters in 1970.[17] It reminds us that we live in a world which does not protect all children. In this month’s newsletter I wrote about my involvement in the Love Makes A Way campaign; I believe that ‘Operation Sovereign Borders’ is sacrificing the hundreds of children locked up in immigration detention in the quest to make Australia so unattractive to desperate asylum seekers that they don’t even attempt to find refuge here; and I believe that that sacrifice is as unjustified as the proposed sacrifice of Isaac by Abraham. I’m sure you can think of many other situations in which adults sacrifice children in some supposedly worthwhile cause. The horror that I hope the story of the binding of Isaac provokes in us should remind us that the sacrifice of children is never justified. Let’s do what Abraham failed to do, and argue against it, whenever we encounter it. Let our answer to every such test be to protect the innocent, even when all the powers that be tell us they must be sacrificed. That, I think, is the only responsible reading of this story.

[4] Quoted by Dan Clendenin in “A Terrifying Text: Abraham and Isaac on Mt. Moriah”. I’ve never read Dawkins myself.