Sermon: Brothers and Sisters Together

Today’s reading from the Gospel according to John is one of my favourite stories in the entire Bible, with one of my favourite characters. The Samaritan woman has often got a bad press. She is, after all, a woman who has apparently had five husbands and is now living with a man to whom she’s not married. One commentator describes her as ‘mincing and coy’. (Raymond Brown) But that’s not the way that I see her. I read her as a seeker, looking for something and not sure what it is. I read her as an outsider, cut off from her community. And I read her as brave, extremely brave, running to share the amazing thing she’s found with the community that excludes her.

The story starts with Jesus sitting alone by a well, when a woman approaches to draw water. John tells us that it’s about noon. Immediately we know that there is something wrong in this woman’s life. She’s coming to the well in the heat of the day, rather than in the cool of the dawn or early evening. She’s coming alone, rather than with the other women of the village. This woman is an outsider, isolated from her community. And yet Jesus asks this woman for a drink.

The very first thing that strikes me about this story is the wonder of Jesus talking with a woman, asking a woman for assistance. While the Uniting Church says very firmly that both women and men are called to ministry, and I can’t remember a time when women weren’t ordained in this denomination, my early twenties were spent watching the Anglican Church debate the ordination of women priests, and the Catholic and Orthodox churches still don’t ordain women. Men and women are not yet equal in the Christian Church, and they were even less equal in Jesus’ time. And yet Jesus, a Jewish man, asks a Samaritan woman for a drink.

The woman is not surprisingly astonished and asks: ‘How is it that you, a Jew, ask a drink of me, a woman of Samaria?’One commentator writes that in asking this the woman is responding with ‘mocking surprise’. (Francis J. Moloney) But I think her question is genuine: why would Jesus, given his gender and nationality, ask her for a drink? After all, the Jewish prejudice against Samaritan women was so extreme that a Jewish regulation of AD 65-66 warned that one could never count on the ritual purity of Samaritan women since they menstruated from their cradle!

The answer, that the woman isn’t given explicitly but that’s implicit in the story, is that Jesus is talking to her because neither her gender nor her nationality matter in this encounter. Jesus speaks to her as a human being, an individual, not as a ‘Samaritan woman’. We don’t know her name, but Jesus is speaking to her by name, as God knows each of us by name.

Jesus doesn’t answer the woman’s question. Instead, as in the conversation with Nicodemus that we heard last week, Jesus moves immediately into teaching. He tells the woman that he is able to offer her ‘living water’, water that will become a spring gushing up to eternal life. The woman responds: ‘Sir, give me this water, so that I may never be thirsty or have to keep coming here to draw water.’ Like Nicodemus, who responds to Jesus’ statement that one must be born from above by asking how anyone can re-enter the womb, the woman misunderstands and takes Jesus’ metaphorical language literally. Jesus uses metaphors and parables to teach, and we miss the meaning if we try to understand symbols literally.

Then comes the part of the story that I identify with most, when Jesus tells that woman that he knows she has no husband, but that she had five in the past and is now living with a man who is not her husband – and the woman instantly asks him a theological question. Some commentators suggest that what the woman is doing here is changing an embarrassing subject. Jesus points out that the woman’s personal life is a mess; the woman tries to distract him. But that’s not how I read it. I see in this woman someone who’s been pondering this for a long time: where is the right place to worship; who’s right, the Samaritans or the Jews? Suddenly, she comes across a prophet, someone who might have the answer. What importance does her private life have when compared with finding out how to worship God properly? It’s not that the woman wants to distract Jesus from her life and direct his attention to something less personal. It’s that the answer to this question is something she really wants to know!

This is one of the reasons why this story is my favourite; because of the eagerness of this woman to learn, an eagerness that leads her to ignore the strangeness of the whole encounter or anything Jesus says about her personal life. And Jesus answers her question. He doesn’t say anything more about her private life, that doesn’t seem to be important to him, either. Instead he talks theology with her, taking her desire to learn seriously: ‘the hour is coming, and is now here, when the true worshippers will worship the Father in spirit and truth, for the Father seeks such as these to worship him.’ Then he announces to the woman who he is; he is the Messiah that the woman has been waiting for.

‘Just then his disciples came. They were astonished that [Jesus] was speaking with a woman, but no one said, “What do you want?” or, “Why are you speaking with her?”’ It’s interesting that the disciples are more shocked that Jesus is talking with a woman than that he’s talking with a Samaritan. Their response reminds us just how extraordinary Jesus’ interactions with women were in the world in which he lived. Jesus had women disciples, who accompanied him and supported him and were present at his death. Jesus allowed Mary of Bethany to sit at his feet in the position of a student. And Jesus has his longest theological discussion with this Samaritan woman.

My final reason for liking this story is because it tells us of one of the first evangelists. The Samaritan woman had been isolated, shunned by the people of her city. When I was growing up I was told that this was because she was a prostitute; but that’s not necessarily true. She has had five husbands – maybe they were brothers who had to marry her one after another because of the laws of levirate marriage. Maybe no one will marry her now because she’s seen to be bad luck – a woman whose husbands all die. She’s living with a man who is not her husband, but maybe as a childless widow she had no choice if she wanted to survive. We don’t know the full story of her life; we only know that she is shunned by her community, to the extent that she needs to come to the well in the middle of the day. And we know that none of that matters when she returns to the city to tell her community about Jesus and to begin the process that brings them to faith. 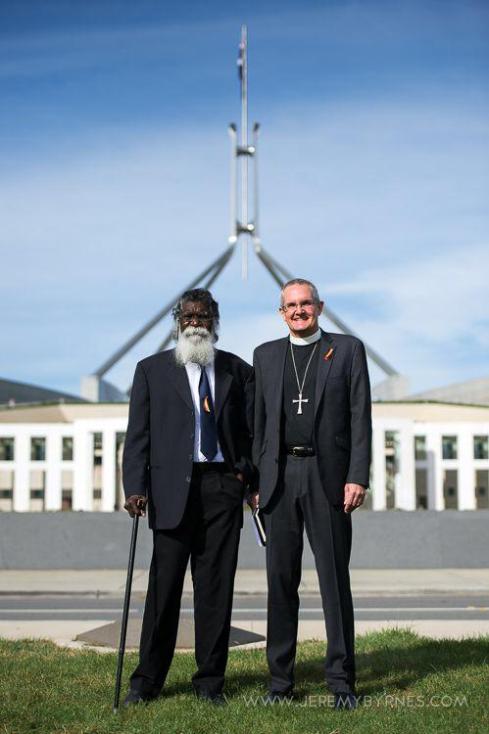 It is serendipitous that we read about the Samaritan woman on the same day that we are confessing the mistreatment of indigenous people in Australia and celebrating that Australia’s First and Second Peoples have A Destiny Together. It’s much too simplistic to say that non-indigenous Australians have viewed indigenous Australians in the same way that Jesus’ male, Jewish, disciples viewed the Samaritan woman. But if you read the new Preamble to the Constitution of the Uniting Church (and there are copies up in the foyer) you’ll find the Church acknowledging that while some members of the uniting churches approached the First Peoples with good intentions, many in the uniting churches shared the values and relationships of the emerging colonial society including paternalism and racism towards the First Peoples. And just as the Samaritan woman asked Jesus whether God should be worshipped on the mountain or in the temple, and heard that God was limited to neither place, the Preamble reminds us that ‘the First Peoples had already encountered the Creator God before the arrival of the colonisers.’ Europeans did not bring God to Australia in their luggage. Just as God was not located only on the mountain or only in Jerusalem, so God was not located only in the northern hemisphere and brought to Australia with the First Fleet. The Preamble reminds us that there were already ‘true worshippers’ in Australia before 1788.

In Canberra on Tuesday the President, Andrew Dutney, reminded us that our primary calling as Christians is to love one another. Two thousand years ago Jewish men and Samaritan women had to learn to love each other as brothers and sisters in order to be part of the church. Today Australia Christians, no matter who we are or where we come from are called to love each other in the same way. As Andrew told us on Tuesday: ‘Here in Australia God puts First Peoples and Second Peoples together in one congregation. It can be hard enough for the First Peoples to be together – more than 400 nations from the Adnyamathanha to the Yolngu. It’s hard for our multicultural Second Peoples to be together too – everyone from Anglos to Zambians. But God goes further. In Christ God puts First Peoples and Second Peoples together in one body and calls us to do just one thing: love one another.’ We shouldn’t be surprised by this. The Bible tells us that God was already doing such crazy and unlikely things before the church was even born. 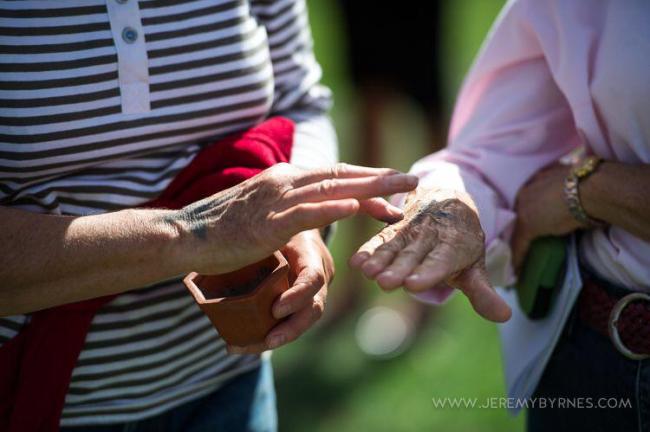 Today we acknowledge the injustice and abuse that has so often marked the treatment of the First Peoples of this land. We remember that in Christ we are brothers and sisters together in the one great family of God, called to live in faith,hope and love. And we celebrate the opportunity we have to learn,grow and serve together. We do all this following in the footsteps of a brave Samaritan woman willing to interact with a Jewish Stranger. And we do all this knowing that that Jewish Stranger is the Christ whose body on earth we are. Let us live out that calling as First and Second Peoples together, one in Christ. Amen.

This entry was posted in Sermons and tagged A Destiny Together, Jesus was a feminist, John 4:5-42, Lent 4, uniting church in australia, Year of Matthew. Bookmark the permalink.