Sermon: God comes to us in bread

Reflection for North Balwyn Uniting Church
The 15th of August, 2021

I am not sure whether you will have noticed this, but something odd happens to the Lectionary in the weeks after Pentecost in Year B. If you have not noticed it before, it is this: suddenly, in the middle of Ordinary Time, the Lectionary leaves the gospel according to Mark behind and spends five weeks reading very slowly through the sixth chapter of John, which is all about bread. There is always a point during August in this Lectionary Year when ministers stare at the readings in exhaustion wondering what more we could possibly say about Jesus and bread. There is a reason that I sneakily took two weeks’ holiday during these John readings, and spent so much time on King David’s soap opera.

This chapter is the closest that John gets to telling us about Communion, the Lord’s Supper, the Eucharist. The gospel according to John has no narrative of the institution of the Eucharist. Rather than showing Jesus on the night of his betrayal inaugurating the new covenant by breaking bread and taking the cup, John shows Jesus tying a towel around his waist and washing his disciples’ feet. But that does not mean that John’s gospel has no Eucharistic references, and the passage from which today’s gospel reading comes is part of them.

The five readings from the sixth chapter of John’s gospel immediately follow the stories of two miracles: the feeding of the five thousand and Jesus’ walking on the sea. The story of the miraculous feeding of the crowd is told more often in the gospels than any other miracle. It is in all four gospels, and the gospels of Matthew and Mark tell of the feeding of the 4000, as well as of the 5000. It was obviously vitally important to all the gospel writers that this particular miracle be told, though they each described it slightly differently.

The gospel according to John is the only one to mention that the feeding happened when the Passover was drawing near, and John is the only author to show Jesus taking the initiative, rather than responding to the disciples’ concerns. Before anyone has asked for food, in fact when the crowd is still approaching him, Jesus says to Phillip, ‘Where are we to buy bread for these people to eat?’ and John says this was Jesus testing Phillip, because Jesus himself knew what he was going to do. That the food comes first from a boy with five loaves and two fish is mentioned in every gospel, but only John mentions that the five loaves are made of barley, traditionally a grain used to feed the poor and animals. 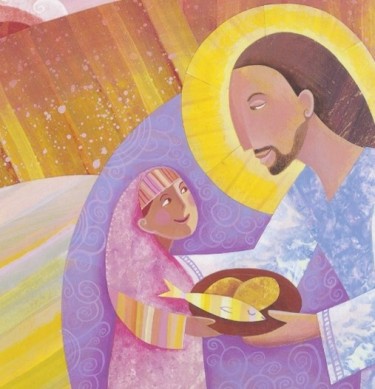 From Jesus the Word by Mark Francisco Bozzuti-Jones, illustrated by Shelly Hehenberger.

After Jesus performs the miraculous feeding, he realizes that the people are about to come and take him by force to make him king, so he withdraws to a mountain by himself. The disciples get into a boat and make for Capernaum, but the lake becomes rough. Amid all the waves and wind the disciples see Jesus walking on the lake and are terrified, but Jesus reassures them, saying, ‘It is I; do not be afraid.’ Immediately the boat reaches Capernaum.

The next day, according to John, the crowd comes looking for Jesus, who has disappeared over night. Unsurprisingly, they do not think of walking on the lake as a possible mode of travel, so their first question to Jesus is ‘Rabbi, when did you come here?’ Jesus doesn’t answer. Instead he rebukes this crowd who are following him, ‘you are looking for me, not because you saw signs, but because you ate your fill of the loaves’. Just as the day before they had wanted to take him and make him king because of his miracle, now Jesus accuses them of coming after him because they want more of the same. And it seems that Jesus is right, because less than twenty-four hours after Jesus fed them all with five barley loaves and two fish, the people are asking for another sign, ‘What sign are you going to give us then, so that we may see it and believe you?’ I would have thought that their awe at yesterday’s miracle would have lasted a little longer, but apparently not.

John, as I said, does not tell the story of Jesus instituting the Last Supper. Instead this story has Eucharistic themes. Jesus now uses ‘bread’ as a metaphor for himself. He is the true bread, Jesus says, the bread of God that has come down from heaven and which gives life to the world. The people are understandably confused. They ask Jesus for this miraculous bread, just as John described the Samaritan woman by the well asking Jesus for living water a couple of chapters previously. She had said, ‘Sir, give me this water, so that I may never be thirsty or have to keep coming here to draw water.’ Now the people say to Jesus, ‘Sir, give us this bread always.’ And Jesus answers, ‘I am the bread of life. Whoever comes to me will never be hungry, and whoever believes in me will never be thirsty’.

Jesus is making a huge Christological claim here; an ‘I am’ statement that connects Jesus with God, whose name, YHWH, means ‘I am who I am’. That in itself is offensive to the people around him. For the first time in his gospel John refers to ‘the Jews’ as the group who are opposed to Jesus. They are appalled at Jesus’ claim to have come down from heaven. After all, they know where he really comes from. They know that he is the son of Joseph, the carpenter. They know his mother and father. They know that Jesus cannot be anyone special because they know him. As so often in the gospels, the people around Jesus cannot see him as unique because of his familiarity.

Not only is Jesus offensively claiming to have come down from heaven, but he is also offensively claiming that he can be eaten. If Jesus was simply using a traditional metaphor in which ‘bread’ is ‘wisdom’ there would be less offence. In the wisdom literature Sophia called out: ‘Come, eat of my bread and drink of the wine I have mixed.’ (Proverbs 9:5) In some Jewish circles the manna in the desert was understood to be a metaphor for the Torah, and Jesus compares himself to that manna, saying: ‘Your ancestors ate the manna in the wilderness, and they died. This is the bread that comes down from heaven, so that one may eat of it and not die.’ The suggestion that Jesus’ ‘bread’/teaching is superior to the manna/Torah would still be problematic, but not as much of a problem as what Jesus is actually saying. Jesus is not saying that his teaching is ‘bread’, but that Jesus himself is. Jesus begins today’s reading by saying, ‘I am the living bread that came down from heaven. Whoever eats of this bread will live for ever; and the bread that I will give for the life of the world is my flesh.’

Like John’s first readers, we hear Jesus’ claim that the bread he gives is his flesh in the light of the Eucharist. We, like them, are used to saying that we are eating Jesus’ flesh and drinking his blood while eating bread and drinking wine. But Jesus’ first hearers had no such easy answer. For them Jesus’ words would have been deeply offensive. Eating someone’s flesh was mentioned throughout the Hebrew Scriptures, but only as a hostile act. One of the psalmists praised God because, ‘When evildoers assail me to devour my flesh – my adversaries and foes – they shall stumble and fall’; (Psalm 27:2) while the prophet Zechariah cursed: ‘let those that are left devour the flesh of one another!’ (Zechariah 11:9) In Aramaic tradition the ultimate eater of flesh was the devil. Drinking blood, which Jesus mentions later, was equally horrendous, forbidden by God’s law. (Genesis 9:4) It was an image of brutal slaughter. (Jeremiah 46:10) And yet Jesus uses these highly offensive metaphors to describe the way in which his followers will have communion with him. No wonder some Romans thought that the early Christians were cannibals.

Jesus is taking something this is almost offensive in its physicality and showing us that it is a revelation of the divine. This is exactly what would later happen in the crucifixion. At the cross the glory of God was revealed in flesh and blood. Here, in the sixth chapter of John, we see that same connection between flesh and glory. Jesus’ flesh and blood, his incarnate life and very real death, are the revelation of God and the source of life. Christianity is a religion in which the divine is tangible. God took on flesh and was killed; we remember our God by eating his flesh and drinking his blood. To outsiders that can sound absolutely disgusting. For Christians, it means we need to take the physical world seriously, because God not only created it, God became part of it. We need to take eating and drinking seriously, because that is one of the ways in which we have communion with God.

Australia is a wealthy country. Australia is also a country in which some people go hungry. Three million, two hundred and forty thousand people in Australia live below the poverty line. More than one in eight adults and one in six children live in poverty. The main reasons for this are the cost of housing and the low levels of most social security payments. When I worked in Williamstown, I helped at the combined churches’ emergency relief program that supplied food to the many people who could not afford it once they had paid for rent and utilities. Now that I live over here in the green and leafy eastern suburbs I make a monthly donation to Foodbank (and I am extremely grateful that I can afford to do so, so thank you for that) but I would prefer a country in which no one needed to use food banks. We even saw what that country might look like last year, when the coronavirus supplement took the old Newstart, new JobSeeker, above the poverty line, but when the supplement was removed this year it plunged millions of Australians back into poverty. Given that the federal government gave billions in JobKeeper payments to companies that actually profited last year, there is no excuse for it not to use our taxes to support those most in need.

Churches care about people living in poverty not only for their own sake, although that of course is central to our love, but because God took flesh and lived among us and because Jesus comes to us as bread and wine. We do not have a disembodied faith in which only the spiritual is important. We have an embodied, physical, material faith which has food at its heart. Christianity is most definitely not about ‘pie in the sky when you die’. It is about bread here and now, because our God comes to us in bread. Amen.

This entry was posted in Sermons and tagged communion, eucharist, Food, Gospel according to John, JobSeeker, Newstart, the Lord's Supper, Year of Mark. Bookmark the permalink.