Reflection: Being wise, not foolish; wheat, not weeds

Posted on November 7, 2020 by Avril Hannah-Jones

So, here we are, near the end of the liturgical year and the end of Jesus’ life on earth.  Over these last three Sundays we hear three parables about the coming of the Son of Man that Jesus tells his disciples on the Mount of Olives in his last days. Jesus’ teachings in the Gospel according to Matthew began with the ‘Sermon on the Mount’; now they end with the stories he tells his followers as they gather privately on another mountain. These are parables for the church, for the people who follow Jesus and call him Lord.

I am a Christian whose way of reading the Bible can best be described as ‘wrestling with the text’. Whether because I am a product of Australia’s anti-authoritarian culture or because I am naturally contrary, when I hear a story like ‘the wise and foolish bridesmaids’ my first reaction is to challenge it. I do not see why the wise bridesmaids could not have shared their oil with the foolish. I want to argue that it would have been better for the bridegroom to be greeted by all ten bridesmaids, even if the lamps did not last as long. I worry that this story praises hoarding and disparages sharing. And I know that I am not alone in this, because of the discussion Emily Lo and I had via text message when I told her what the gospel reading was for this Sunday. Emily’s position is that there was no need for all ten lamps to be alight at once; the ten could have shared the light; worked together for a better outcome; and become life-long friends. I am worried that this story applauds hoarding; Emily is concerned that its message is that mistakes cannot be forgiven.

This parable seems to be an allegory, with Jesus as the bridegroom, the kingdom of heaven as the wedding feast, and the bridesmaids representing Jesus’ followers. Given that, why are some bridesmaids welcomed to the banquet while others are left outside a shut door? It is not a lack of desire for the coming of Jesus and the kingdom of heaven; all ten bridesmaids are looking forward to the coming of the groom. It is not because some bridesmaids are able to remain constantly vigilant; all ten become drowsy and sleep. It is not because some wait patiently for Jesus’ coming while others are impatient; none of the bridesmaids complains about the delay. It is not because only some bridesmaids recognise the bridegroom; even the foolish ones address him as ‘Lord’. According to this story, it is not enough to know the Lord, to wait with patience on his coming, and to rejoice at his arrival, because these things are common to both wise and foolish bridesmaids. The only difference between wise and foolish is the distinction between those who have enough oil to keep their lamps burning, and those who do not. 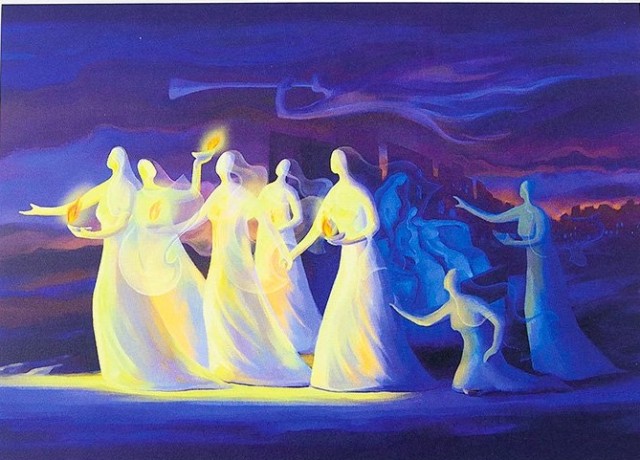 What, then, can the oil represent? Martin Luther suggested that the oil represented faith. Faith cannot be given to another as a gift or left to another as an inheritance. Faith is something that each of us must claim for ourselves. There is a saying that God has no grandchildren; we each need to individually claim the relationship with God that allows us to call God ‘Father’ and accept our role as God’s children. If the oil is faith, the wise cannot just give it to the foolish.

Another suggestion is that the oil represents love. Earlier, as Jesus was talking to his disciples, he warned them that in the time of persecution ‘the love of many will grow cold’. (Matthew 24:12) The oil could represent the love of God and neighbour that Jesus said was the greatest commandment. (Matthew 22:34-40) Again, we cannot rely on the love that other people show. Being part of a loving community without ourselves expressing that love to the best of our ability does not work.

But we are in the Gospel according to Matthew, and so you will probably not be surprised that I think the ‘oil’ in this allegory is good works. Back on that other mountain Jesus warned that: ‘Not everyone who says to me, “Lord, Lord”, will enter the kingdom of heaven, but only one who does the will of my Father in heaven.’ (Matthew 7:21) This is what the foolish bridesmaids who call the bridegroom ‘Lord’ find when they knock on the door late at night. On that other mountain Jesus told his followers to let their light shine before others, so that people might see their good works and give glory to their Father in heaven. (Matthew 5:16) This is what the wise bridesmaids do, when they bring flasks of oil together with their lamps to the feast. I have mentioned before how uncomfortable I am, as a good Protestant who knows that by grace I am saved through faith, with the idea that salvation may require good works. But in two weeks we are going to hear the parable of the final judgement and by it we will be reminded, just in case we haven’t picked it up from the rest of the gospel, that the will of Jesus’ Father is that we feed the hungry and give water to the thirsty, welcome the stranger, clothe the naked, take care of the sick, and visit those in prison. According to Matthew this is the oil that fills lamps, the oil of works of love and mercy.

I have been a minister for a little over twelve years, and so I have preached on this parable four times. It has never seemed more relevant. For several days this week I was riveted on the election in the USA. I have watched in horror as American Christians have promoted Donald Trump as the ‘pro-life’ candidate, by which they mean that he has nominated to the Supreme Court judges who oppose the legalisation of abortion. Over 230,000 Americans have died of covid19; in 2020 American police have killed one Black person a week; and it has been revealed that the parents of 545 children separated from their families by US border officials between 2017 and 2018 cannot be found. One commentator told evangelicals to vote for Trump even if they did not approve of him, asking ‘If you’re a Christian and not in favor of President Trump, can you at least be grateful for the fact that his administration has protected lives in and out of the womb?’ I know that as a clergyperson I am not meant to be politically partisan, but that Christians think that by voting for Trump they are voting in favour of ‘life’ flummoxes me.

Matthew is writing for a community that is as deeply divided as the church is today. Matthew is writing about a community that contains both wheat and weeds, both sheep and goats. (Matthew 13:24-30; 25:31-46) And Matthew tells us that separating the wheat from the weeds, the sheep from the goats, the wise from the foolish virgins, is Jesus’ task not ours. In the parable about the wheat and the weeds, when the householder’s slaves ask him whether they should gather the weeds, he replies, ‘No; for in gathering the weeds you would uproot the wheat along with them’. In today’s parable it is the bridegroom, not the other bridesmaids, who keeps the door shut. As the Apostle Paul told the Romans, ‘Who are you to pass judgement on servants of another? It is before their own lord that they stand or fall.’ (Romans 14:4) And of course, Paul then added that ‘they will be upheld, for the Lord is able to make them stand,’ because Paul is the preeminent teacher of salvation by grace. As I watch the American election and see Christians acting in ways that I think mark them as weeds, goats, or foolish bridesmaids, Matthew reminds me to leave judgement to God.

In Jesus’ life, death, and resurrection we believe that the kingdom of heaven has begun, but we still see sinfulness, suffering, and death all around us. We live between resurrection and parousia, between the first and second comings of Christ. To both the first Christians who had expected Christ to return within a generation, and to us who have waited for 2000 years, Matthew gives the same message. The world will one day be transformed and reconciled to God. The bridegroom is coming. In the meantime, we are to keep the oil in our lamps and let our light shine before others so that everyone can see our good works and give glory to our Father in heaven. This means living in such a way that when the Son of Man comes in his glory he will say to us, ‘Come, you that are blessed by my Father, inherit the kingdom prepared for you from the foundation of the world’. We know what that way of life is. So let us live it. Amen.

This entry was posted in Sermons and tagged Donald Trump, elections, Matthew 25:1-13, sheep and goats. Bookmark the permalink.