I am cheating a little today by focusing on this reading from the Gospel according to Luke, the story of two disciples encountering the risen Jesus on the road to Emmaus.  In the weeks after Easter the lectionary readings from the gospels tell us about the disciples meeting with the resurrected Christ and remind us that the empty tomb alone was not enough to create faith. Today the lectionary suggests we read John’s tale of Thomas, who first doubted and then believed. But it is in this story from Luke that we find Jesus being made known to the disciples ‘in the breaking of the bread,’ and later in today’s service we ourselves will encounter Jesus in the breaking of the bread as we celebrate the Eucharist, or Holy Communion, or the Lord’s Supper.

When we celebrate the Eucharist we imitate an important element in Jesus’ life. One accusation consistently made against Jesus during his lifetime was that he was a glutton and a drunkard. He was always feasting with the people around him, rather than fasting as the religious were meant to. His answer when once questioned about this was that ‘the wedding-guests cannot fast while the bridegroom is with them, can they? As long as they have the bridegroom with them, they cannot fast’. (Mark 2:19) So it is no surprise that food so often accompanied the appearances of the risen Jesus, too, when the bridegroom the wedding guests had mourned as dead was revealed to be alive.

We don’t know who the two disciples on the road to Emmaus were. We’re only given the name of one of them, Cleopas, and we haven’t heard of him before, nor do we hear of him again. These aren’t members of the Eleven. They’re just ordinary followers of Jesus, devastated by his death. They had hoped that Jesus would be the one to liberate Israel, as had been promised. But Jesus had been crucified and all these hopes had been dashed.

As the disciples walk, Jesus joins them, but they do not yet know who he is. They had heard about the empty tomb from the women, but that story had only astounded them, leaving them with confusion rather than faith. Now, even though Jesus himself is accompanying them, they remain blind. We don’t know what it was that kept their eyes from recognising who it was who had joined them, but we shouldn’t be too surprised. The same thing can happen today. We may believe that Jesus walks with us, as he walked with the disciples on the road to Emmaus, and yet we may be unable to see or experience him, our eyes closed by doubt and despair, preoccupation and suspicion, our immediate needs, or the noise of the world around us.

Jesus reveals himself to these disciples, and they journey from despair to recognition, through what Luke’s readers and we ourselves can recognise is a standard church service. In the Book of Acts Luke tells us that after the day of Pentecost the disciples and the first converts ‘devoted themselves to the apostles’ teaching and fellowship, to the breaking of bread and the prayers’ (Acts 2:42). This is what Christians still do when we gather together two thousand years later, and this is what we see happening here on the road to Emmaus. First, there is teaching. Jesus interprets to the disciples everything said about him in the Scriptures. As they listen to him, the disciples’ hearts burn within them, but they don’t immediately share this with each other. It’s not through the Scriptures and teaching alone that they and we discover Christ.

The disciples now invite Jesus to share a meal with them, the ‘fellowship’ that Luke describes in the Book of Acts, and at the meal Jesus takes bread, blesses it, breaks it, and gives it to them, ‘the breaking of bread and the prayers’. Jesus celebrates the Eucharist with these disciples, as he still does with us today. The guest becomes the Host and shares himself in the breaking of the bread. Luke is showing us that we will recognise Jesus’ presence in our lives when we share as a community in Word and Sacrament, in teaching and fellowship, in the breaking of bread and the prayers – as Christians continue to do right down to today. 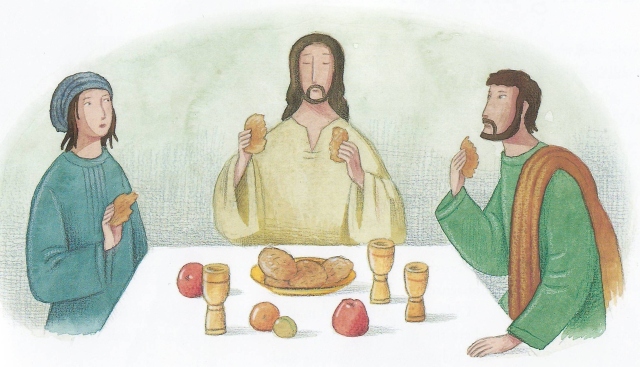 Luke’s story is about two of Jesus’ many disciples, but it doesn’t end with them. After Jesus vanishes, the two race back to Jerusalem to share their news with the others, and find that Jesus has appeared to Peter as well. The community that scattered in fear after Jesus’ death is now being recreated as its various members come together to share their individual stories. The women tell the tale of the empty tomb; Simon Peter shares the story of his encounter with the risen Jesus; now Cleopas and the other disciple bring their own experience and add it to that of the rest of the community. Coming to faith happens in community. It’s together that we discover who Jesus is; it is as we celebrate the Lord’s Supper together than we encounter our Host.

When we celebrate Holy Communion together, we are not just looking back to the meals Jesus shared while on earth, and we are not simply feasting with him ourselves. This holy meal also prompts us to look forwards and outwards. The Eucharist is celebrated with bread and wine, simple ‘goods of this earth’ that remind us of God’s gifts to us in creation. They also raise for us immediate questions of justice, because however symbolic the ‘bread’ and ‘wine’ may have become, even when they are wafers and thimblefuls of grape juice, they represent real food. At the beginning of the church’s life Holy Communion took place at a real meal eaten to satisfy real hunger, in which the bread and wine were not merely symbols but the staples needed for life. One of the worst things in the world today is that fact that some people still die from a lack of food, while the health of others is put at risk because we have too much. Every time we eat the bread and drink the wine, we should be reminded of the world’s desperate need of food to feed the hungry.

Communion reminds us of the need to share not only food but also the other necessities of life. The connection between sharing bread and sharing other goods seems to have been taken for granted by the early church. Martin Luther described early Communions as ‘so properly used … that they even gathered food and material goods in the church, and there … distributed among those who were in need,’[1] and while he was probably exaggerating to make a point there does seem to have been a strong connection between the celebration of Communion and charity. Justin Martyr explained that Christians, in contrast to the contemporary pagans, worshipped God not by burning as offerings the things God gave for sustenance, but by using them for themselves and the needy. Bringing forward goods for the poor at the same time of the Eucharistic offering seems to have lasted until at least the late fourth century, connecting the sharing of communion with sharing with those in need.

The story we hear today tells us that the disciples have the opportunity to recognise Jesus in Word and Sacrament because of their openness to an alien. They describe him as ‘a stranger in Jerusalem’, and yet they’re willing to talk to him. When they arrive at their village, this stranger walks ahead of them as if to continue his journey. But they urge him: ‘Stay with us, because it is almost evening and the day is now nearly over.’ They offer hospitality to a stranger, and through that hospitality their eyes are opened, and they see Christ in the stranger they’ve welcomed. They could have ignored the stranger who questioned them; they could have let him continue on his journey. They did neither, and found themselves in the company of the resurrected Jesus. It’s an obvious hint for the church, which is invited to see God in the face of every stranger welcomed, housed and fed. It’s another reminder of the importance of community in the life of faith, and the connection between being fed by God and feeding the hungry.

Liberation theologian Gustavo Gutierrez once wrote of the Eucharist that: ‘The breaking of bread is both the point of departure and the destination of the Christian community.’[2] By sharing Communion together, we celebrate the redemption Christ has won and God’s victory over all forms of injustice. Nourished by Communion, we are then called to minister to the whole world, sharing the good news of God and feeding the hungry. As we gather together around the Lord’s Table we pray that we might become ‘one with Christ, one with each other, and one in ministry in the world’. We ask God to help us to become the people God created us to be. We gather around the Table at which our Lord is the Host, knowing that we are welcome there, and then we leave the table to share God’s welcome with the world. Fed by both metaphorical and literal food, we go out to share both metaphorical and literal food. We receive what we are and we become what we receive – the Body of Christ.

Because of the connection between Holy Communion and community we usually only celebrate the Eucharist when we can gather together. The bread which becomes for us the Body of Christ is only broken in the presence of that other ‘Body of Christ’ – the church. (When we take the bread and wine to people in prison, or hospital, or to those who are housebound, we demonstrate that people in isolation are still part of the community that gathered around the Table.) So, if any of you do not want to celebrate Holy Communion while we are separated that is a perfectly reasonable decision to make.

But these are, as I have said every week so you may be tired of hearing it, strange and unusual times. We cannot gather physically as the Body of Christ but, as I have constantly been reminding you, we are still able to gather spiritually. And so, gathered together by the written word, by audio/video recordings, and by the grace of God, I invite you to join me at the Table at which Jesus is the Host so that we can feast on him together in our hearts with thanksgiving, remembering all those who need both real and metaphorical food in this time of isolation. We can do this because no matter what else might change in this time of COVID19, the certainty of God’s invitation to us has not. Jesus still invites us to the banquet, and we can accept his invitation. Amen.

This entry was posted in Reflection, Sermons and tagged communion, eucharist, Luke 24:13-35, the Lord's Supper. Bookmark the permalink.