Sermon: The foolishness of the wise

Posted on January 4, 2020 by Avril Hannah-Jones

Yes, I’m cheating. because I was preaching in a different church this Sunday from that I preached in last week, the second half of this sermon is a repeat of what I said then.

Tomorrow, January the 6th, is the Feast of the Epiphany. For centuries January 6 was the day on which Eastern churches celebrated Christmas, and in some places in the West it was known as ‘Little Christmas’; while in Ireland it was called ‘Women’s Christmas’ because it was the one day in the year when men would help with the housework, presumably to give the women a tiny break after all the extra work they’d done to help the family celebrate the Twelve Days of Christmas. In these days of gender equality and men doing housework there is, of course, so longer a need for a ‘Women’s Christmas’, so tomorrow we will be able to give all our attention to celebrating the Epiphany, the revelation of Christ to the Gentiles seen in the visit of the magi to Bethlehem.

The magi of unspecified number are the only non-Jews mentioned in the Christmas stories, unless we count Luke’s mention of Emperor Augustus and Quirinius, governor of Syria. As the church became increasingly Gentile, Christians became more interested in these Gentile ancestors in the faith. They looked for more information about them, and embroidered the information they had. The church decided that they were kings because of the prophecy in Isaiah: ‘nations shall come to your light, and kings to the brightness of your dawn;’ and that these kings ‘shall bring gold and frankincense’. (Isaiah 60:3, 6). The only representatives of the nations at Jesus’ birth were the magi, and they did bring gold and frankincense among their gifts, so early Christians decided that they must be the kings about whom Isaiah was prophesying.

In the fourth century Saint Augustine claimed that since the story of the magi was about the revelation of Christ to all Gentiles the magi themselves must represent the entire Gentile world. So the Venerable Bede, an Englishman living in the seventh century, decided that this meant that each wise man must represent one of the three known parts of the world: Asia, Africa, and Europe. After all, although Matthew doesn’t mention how many magi there were, they did bring three gifts, so it made sense that there would be three of them, even though in the sixth century Syrians had begun to claim that there were twelve, paralleling the twelve Apostles. Christians liked the Venerable Bede’s idea, and from then on artists usually pictured the magi as three kings: one Asian; one African; and one European. 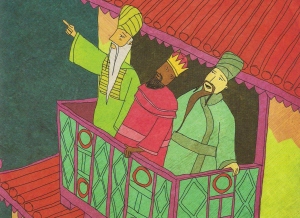 I suspect that the reason the carol ‘We three kings of Orient are’ isn’t in Together in Song is because the compilers knew that the magi weren’t actually kings. Instead, we have carols like the two we’ve already sung today, which describe the magi as ‘three wise men from country far’ and ‘wise men, they called them, earnest astrologers’. But even though ‘wise men’ is a good translation of the Greek word ‘magi,’ there’s a problem with calling these particular magi ‘wise’. After all, on their way to see Jesus, they do a remarkably stupid thing.

The magi may be ‘wise men from the East’ but apparently they lack all common sense. It’s their naïve questioning that tips King Herod off about his potential rival. The magi come to Jerusalem, the centre of Jewish power, looking in the wrong place for the wrong kind of king. They find a fearful tyrant, and calmly ask to be directed to another, newly born, king.  Herod thinks that he is the ‘king of the Jews,’ although he’s actually a Roman puppet, and when he hears the magi’s questions ‘he was frightened, and all Jerusalem with him’. For those who had come to terms with Roman occupation and a Roman-approved king, hearing about the birth of Jesus is understandably terrifying. But Herod covers up his fear. He calls the chief priests and scribes; finds out where to direct the magi; and sends the magi off, asking them to let him know when they’ve found the baby. This is because, like all evil kings, he has a cunning plan.

The magi go to Bethlehem, and here finally they do show some wisdom; they recognise Jesus as king. In Matthew’s story, the magi are the only people who worship Jesus as he deserves, kneeling down and offering him homage. Matthew contrasts these Gentiles who honour the ‘king of the Jews,’ with Herod, who calls himself ‘king of the Jews’ and pretends that he wants to offer Jesus homage, but actually seeks to kill him. Despite their blunder in frightening Herod and all Jerusalem, the magi truly are ‘wise’ in their acknowledgement of Jesus.

The magi are warned in a dream not to tell Herod where Jesus is, and they return home another way. Sadly, as we heard last week, when the magi didn’t return to Herod to tell him which one particular child would be his replacement, ‘he sent and killed all the children in and around Bethlehem who were two years old or under, according to the time that he had learned from the wise men’. The Massacre of the Innocents didn’t succeed in killing Jesus, because an angel had warned his father Joseph in a dream to flee Bethlehem for Egypt. But it did succeed in killing all the other children born in Bethlehem at around the same time, and we shouldn’t forget that. We often combine the Epiphany with Christmas in nativity pageants, and have wise people bringing gifts to the baby Jesus, but I’ve never yet seen a nativity pageant in which children act out what happened next. That’s a pity, because the Massacre of the Innocents is as much a part of the Christmas stories as shepherds and stars. Liz Gibson, of the Iona Community, says that rather than worrying so much about putting Christ back into Christmas, we should put our efforts into putting Herod back into Christmas. She writes:

To include in the Christmas story the slaughter of the innocents only serves to show that Jesus was born into the real world. Horrible though it was, it’s no worse than many things that happen today. When we question God’s whereabouts and intentions in the catastrophes of life there are no simple answers.[1]

If, while celebrating the visit of the magi, we also include what that visit led to, the Massacre of the Innocents and the Flight into Egypt, then the answer to humanity’s frequent question, ‘where is God?’ is: ‘right there in the midst of danger and slaughter, vulnerable and defenceless’. This is the message of Christmas, that God took on flesh and blood, becoming human in order to share everything humans experience, including suffering and death. That means that whenever we see our sisters and brothers suffering, we see Jesus.

Dietrich Bonhoeffer, the German theologian killed by the Nazis and one of my heroes, wrote:

And here in Australia we can add: ‘For all those in immigration detention, here or on Manus or Nauru, Jesus Christ became a refugee seeking asylum in Egypt: rejoice, O Christians!’

The Christmas stories are stories of power and protest and politics. We can often forget how revolutionary and counter-cultural Christianity is and has been from its very beginning. So, let the Christmas story remind you. When you hear or read about asylum seekers and refugees, remember Joseph taking Mary and Jesus and fleeing to Egypt. When you see news of children being mistreated, abducted, or killed, remember the innocents massacred in Bethlehem. When you see injustice perpetrated by people in power, remember the fear of King Herod that led to the deaths of his subjects. And as we Gentiles follow the magi to kneel down in homage before Jesus, let us remember that whenever we care for those who experience rejection, pain and suffering, we are caring for Jesus himself. This Christmas season, may the Christmas stories inspire us to continue serving Christ by caring for the people and the world for which Christ died. Amen.

This entry was posted in Sermons and tagged asylum seekers, Dietrich Bonhoeffer, Epiphany, Flight into Egypt, magi, Massacre of the Innocents, Matthew 2:1-12, refugees. Bookmark the permalink.