Sermon: The value of a human life

Do you know how much your life is worth? How about the lives of those you love? It’s a ridiculous question, of course; it should be impossible to put a price on a human life. I discovered recently in an article written by Richard Dennisss, the chief economist at the Australia Institute, that the federal government knows exactly how much an Australia life is worth. It is 4.5 million dollars. If you die prematurely, then each year of forgone life is worth $195,000. It’s fascinating – I went to check the advice that Denniss quoted in his article and found it freely available: a three-page document from December 2014 called ‘Best Practice Regulation Guidance Note: Value of statistical life’. The note says that, ‘A number of regulatory proposals are aimed at reducing the risk of physical harm, for example, occupational health and safety laws, warning labels on tobacco products and transport safety measures such as seat belt laws’. In order to work out whether they are worthwhile, public servants need to determine whether the value of the lives saved is greater than the amount spent to reduce the harm. Future lives are considered to be worth less than present lives. It’s considered more beneficial to save three lives now rather than five lives in eight years’ time – the note has a table showing that. I might not have believed Denniss if I hadn’t seen it for myself.

In his article Denniss refers to a past attempt by the Environmental Protection Authority in the USA to discount the lives of those over 70 in working out whether it was worthwhile to ensure clean air and water. That’s not the sort of ‘senior’s discount’ anyone wants. When it was discovered there was an outcry, and the EPA now apparently considers every American life to be of equal worth. But undoubtedly it values American lives more highly than non-American lives. I am equally sure that the Department of Prime Minister and Cabinet values Australian lives more highly than those of citizens of other nations. According the ‘Guidance Note’ it definitely values the lives of those of us here today more highly than the lives of those yet to be born. Richard Denniss did the sums and worked out that one life today is worth 867 lives in 100 years’ time. So, we don’t need to worry too much about climate change; the lives of those who will be most affected are worth much less than our lives.

Usually the relative value of different lives isn’t given as bluntly as in a ‘value of statistical life’ briefing note, but valuing the lives of some people over others is something we all do. Of course we value our own lives and the lives of those we love over those of strangers, but we also value the lives of some strangers over others. I can’t put it better than Denniss did in his article, in which he wrote:

Last year … governments around the world … were willing to spend tens of millions of dollars to rescue the 12 Thai boys and their soccer coach who had become trapped in a flooded cave. The same amount of money spent on food and medicine to help children dying of malnutrition in Syria, South Sudan or Yemen would have saved far more lives. But most people value heroically saving a specific life than procedurally saving anonymous lives.

We have seen another example of that this week. Australians have celebrated the release of refugee Hakeem Al-Araibi from detention in Thailand, while continuing to accept the detention of other people found by the UNHCR to be equally in need of our protection, although at least federal parliament did agree this week that those at risk of death could be detained in Australia rather than on Manus and Nauru.

Christianity is radical because it insists that every life is of equal value. Every human being is made in the image of God. It does not matter our age, sex, nationality, whether we are healthy or sick, intelligent or stupid, rich or poor, living in the 21st century or the first or the 31st, assuming humanity gets there. We are all of equal value in the eyes of God. We sometimes forget how unusual that understanding of the value of human life is.

When Jesus was teaching his disciples he was doing so in a world in which it was taken for granted that the rich were more important than the poor. After all, wealth is a sign of God’s favour and poverty is a sign of God’s displeasure. It was the rich who were blessed, members of the wealthy upper class, people with many possessions. But Jesus takes this understanding and turns it upside down: ‘Blessed are you who are poor, for yours is the kingdom of God.’

Immediately before today’s reading begins, Jesus has spent a night on the mountain in prayer. After praying, he chooses twelve of the disciples to be apostles. In today’s reading he comes down from the mountain with the twelve, to a level place. On the mountain Jesus has been with God. Now on the level place Jesus is with humanity, teaching and healing. As so often we are reminded of the amazing inclusivity of Jesus’ concern; the people around him include the apostles, the other disciples, and a great crowd including both Jews from Judea and Jerusalem and Gentiles from Tyre and Sidon. Today’s reading also emphasizes how successful Jesus’ ministry is. Everyone is coming to see Jesus, to hear him, and to be healed by him, and Jesus does heal them all. But in the midst of this scene of success, Jesus preaches a sermon which completely overturns worldly understandings of triumph. 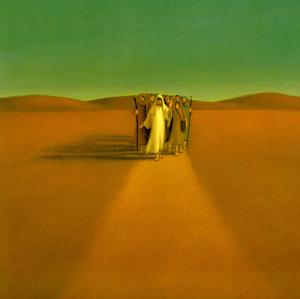 It’s the poor, not the wealthy, who are blessed, and they are blessed because their poverty will be overcome. The kingdom of God is theirs, and in that kingdom the hungry will be fed and those who weep will laugh. This is not because the poor are worthy and deserving and so will be rewarded in heaven. Jesus is not doing a Scott Morrison and saying that ‘there is a fair go for those who have a go’. Instead the poor are blessed not because of who they are but because of who God is. As the liberation theologian Gustavo Gutierrez wrote:

God has a preferential love for the poor not because they are necessarily better than others, morally and religiously, but simply because they are poor and living in an inhuman situation that is contrary to God’s will. The ultimate basis for the privileged position of the poor is not in the poor themselves, but in God, in the graciousness and universality of God’s agapeic love.

As I have said before, the Gospel according to Luke is the gospel about and for the poor. The beatitudes as Luke records them are extremely material; they speak to real socioeconomic situations, to the concerns of daily life. They are also scandalous, they overturn every conventional expectation, but then Jesus’ entire ministry was scandalous. He associated with society’s outcasts and pronounced God’s blessing on them. He revealed the true nature of the reign of God, as good news for those most despised.

Is it also good news for the rich? ‘Then who can be saved?’ asked those around Jesus, after he had told a certain ruler about the impossibility of camels going through the eyes of needles. Jesus replied ‘What is impossible for mortals is possible for God,’ and those of us rich, full, and happy will need to be reassured by that. In the meantime, as the Russian philosopher and theologian Nickolai Berdyaev said, ‘My daily bread is a material concern; the daily bread of my neighbour is a spiritual concern.’

According to the Department of Prime Minister and Cabinet our lives are worth $4.5 million. In the eyes of God our lives are without price. And the same is true of every other person who has ever or will ever live. From God’s perspective, we are all equal: the Father’s children; Jesus’ siblings; made in God’s own image. We are priceless. Thanks be to God. Amen.

This entry was posted in Sermons and tagged beatitudes, Gospel according to Luke, Gustavo Gutierrez, Hakeem Al-Araibi, human worth, Luke 6:17-26, Nickolai Berdyaev, Richard Dennisss, Sermon on the Plain, Year of Luke. Bookmark the permalink.

2 Responses to Sermon: The value of a human life