Sermon for Williamstown Uniting Church
The 12th of August

Today we continue to hear about the very intimate connection between Jesus and bread in the Gospel according to John. We begin today’s reading from the gospel with the same statement that ended last week’s reading: ‘Jesus said to them, “I am the bread of life. Whoever comes to me will never be hungry, and whoever believes in me will never be thirsty.”’ Jesus is making a huge Christological claim here; an ‘I am’ statement that directly connects Jesus with God. That in itself is offensive to the people around him. For the first time in his gospel John refers to ‘the Jews’ as the group who are opposed to Jesus. They are appalled at Jesus’ claim to have come down from heaven. After all, they know that he hasn’t. They know that he is the son of Joseph, the carpenter. They know his mother and father. They know that Jesus cannot be anyone special, because they know him. There’s some tall poppy syndrome happening here.

Not only is Jesus offensively claiming to have come down from heaven, he is offensively claiming that he is bread to be eaten. Jesus could simply be using a traditional metaphor in which ‘bread’ is ‘wisdom’. In the wisdom literature Sophia called out: ‘Come, eat of my bread and drink of the wine I have mixed.’ (Proverbs 9:5) In some Jewish circles the manna in the desert was understood to be a metaphor for the Torah, and Jesus compares himself to that manna, saying: ‘Your ancestors ate the manna in the wilderness, and they died. This is the bread that comes down from heaven, so that one may eat of it and not die.’ The suggestion that Jesus’ ‘bread’/teaching is superior to the manna/Torah would still be problematic, but not as much of a problem as what Jesus is actually saying. It’s not Jesus’ teaching that is ‘bread’, but Jesus himself. Jesus ends todays reading by saying, ‘I am the living bread that came down from heaven. Whoever eats of this bread will live for ever; and the bread that I will give for the life of the world is my flesh.’

Like John’s first readers, we hear Jesus’ claim that the bread he gives is his flesh in the light of the Eucharist. We, like them, are used to saying that we are eating Jesus’ flesh and drinking his blood while eating bread and drinking wine. But Jesus’ first hearers had no such easy solution. For them Jesus’ words would have been deeply offensive. Eating someone’s flesh was mentioned throughout the Old Testament, but only as a hostile act. One of the psalmists praised God because, ‘When evildoers assail me to devour my flesh – my adversaries and foes – they shall stumble and fall’ (Psalm 27:2); while the prophet Zechariah cursed: ‘let those that are left devour the flesh of one another!’(Zechariah 11:9) In Aramaic tradition the ultimate eater of flesh was the devil. Drinking blood, which Jesus mentions later, was equally horrendous, forbidden by God’s law (Genesis 9:4). It was an image of brutal slaughter (Jeremiah 46:10). And yet Jesus uses these highly offensive metaphors to describe the way in which his followers will have communion with him. No wonder some Romans thought that the early Christians were cannibals!

Jesus is taking something this is almost offensive in its physicality and showing us that it is a revelation of the divine. This is exactly what would happen in the crucifixion. At the cross the glory of God was revealed in flesh and blood. Here, in the sixth chapter of John, we see that same connection between flesh and glory being made. Jesus’ flesh and blood, his incarnate life and very real death, are the revelation of God and the source of life. Christianity is a religion in which the divine is tangible. God took on flesh and was killed; we remember our God by eating his flesh and drinking his blood. To outsiders that can sound absolutely disgusting. For Christians, it means we need to take the physical world seriously, because God not only created it, God became part of it. We need to take eating and drinking seriously, because that is one of the ways in which we have communion with God.

Show and Tell time! One of the books I read over my holiday was Daring Greatly by Brene Brown, a research professor at the University of Houston who works on vulnerability, shame, courage and empathy.[1] In Daring Greatly Brown writes about the Culture of Scarcity in which we live today. We live in a world in which we’re told that there will never be enough (time, money, health, housing, jobs) and that we will never have enough; that there isn’t enough to go around. Even worse, we are told that we are not enough. As part of her research Brown gives people the phrase ‘never __________ enough’ and has them fill in the blank. She says it only takes a few seconds before they fill that blank in with what their inner voices tell them: 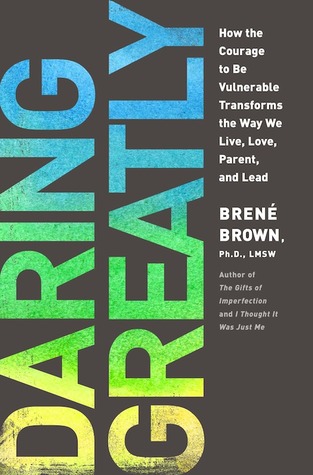 I know that I have that voice in my head, telling me that as a minister I am never good enough, never available enough, never pastoral enough. And I feel that I’ll never be good enough as a minister because I will never have enough time to do all the ministry that could be done. At the back of my mind I have a constant worry about whether this congregation has enough money to keep a 140-year-old bluestone building upright and watertight. So, while holidaying, when ironically for once I felt that I did have enough time to read and think, I read Brown on the Culture of Scarcity murmuring, yes, yes, yes!

The Culture of Scarcity is communal as well as personal. This week a series of posts on social media that demanded that Australia stop giving aid to other countries and instead give the money to Australian farmers affected by drought. There were a lot of good arguments being made in response about how small the amount we spend on aid actually is, and the ways in which overseas aid enables our neighbours to buy what Australian farmers produce, but one person involved in a drought charity responded, ‘Honestly I don’t think anyone cares anymore. Why aren’t we helping our people at home? Surely they must come first.’ He couldn’t imagine a world in which Australia could support both local farmers and people needing help in Indonesia. He was stuck in the Culture of Scarcity.

Much as I appreciate what Brown says, and much as I am drawn to her idea of simply showing up and letting myself be seen in all my vulnerability, rather than trying to be the perfect minister, I disagree with her about abundance. God’s abundance is exactly what Jesus came to share with us. Later in the Gospel according to John Jesus will say, ‘I came that they may have life, and have it abundantly.’ (John 10:10) Today’s reading about bread comes in the context of that boy sharing five barley loaves and two fish, and there being so much left over after everyone had eaten their fill that the scraps filled twelve baskets. When Jesus talks about himself as the bread that we are to eat, this is bread that will never, ever, run out. We can, in Brown’s words, show up and let ourselves be seen in all our imperfect vulnerability because in the light of God’s abundance we are always already enough. God is good, perfect, powerful, strong, extraordinary. We are not God, we are not called to be God, and so just as we are, we are good enough, perfect enough, powerful enough, strong enough, extraordinary enough. And if we need an example of what it means to be vulnerable and worthy, to face uncertainty, exposure and emotional risks and yet to know that we are enough, we simply have to look at Jesus, who gives himself to us as bread to eat.

Brene Brown writes that ‘if the opposite of scarcity is enough, then practising gratitude is how we acknowledge that there’s enough and that we’re enough’. In her work with ‘wholehearted’ people Brown found that ‘they gave specific examples of gratitude practices that included everything from keeping gratitude journals and gratitude jars to implementing family gratitude rituals’.[4] It’s always good to find that something that we do every week at church promotes psychological health. Practising gratitude is something that we do often; coming to church each Sunday to say ‘thank-you’ to God is one of our ‘family gratitude rituals’. So I’ll end with a verse of a hymn that we won’t sing today, but that I hope you all know, as part of this morning’s ritual of gratitude:

[1] Brene Brown, Daring Greatly: How the Courage to be Vulnerable Transforms the Way We Live, Love, Parent and Lead (Penguin Random House, 2012).

This entry was posted in Sermons and tagged abundance, being enough, bread, Gospel according to John, John 6, John 6: 35 41-51, scarcity, Year of Mark. Bookmark the permalink.