‘How very good and pleasant it is when kindred live together in unity!’ As most of you know, over the past six years the Uniting Church’s Working Group on Doctrine, of which I am a member, has been working on a report on same-sex marriage. The report went to the Assembly Standing Committee last year and the ASC decided to take it to the Assembly meeting coming up in July, with a recommendation that the Assembly allow Uniting Church minister and congregations to decide for ourselves whether or not to marry same-sex couples, acting according to our conscience.

The WGD report is now public, and the responses can best be described as ‘mixed’. This week I foolishly interacted with the Facebook page of a Uniting Church congregation in NSW and the page’s moderator replied to a comment in which is suggested that an earlier post was less than respectful: ‘We fully respect the WGD. We also fully disagree with their inaccurate and intellectually dishonest … paper … WGD will each have to give an account to God for false teaching … [the result will be] spending eternity with Satan in the Lake of Fire’.

‘How very good and pleasant it is when kindred live together in unity!’ No wonder there is a psalm hymning the beauty of harmony. Today we hear that psalm in response to one of the most beautiful stories in the Hebrew Scriptures, the story of the friendship of David and Jonathan.

Last week, if you remember, I spoke about Jonathan son of Saul, a prince so beloved of his people that they ransomed him when he accidentally broke his father’s oath. Now we hear more about Jonathan, described by one commentator as ‘the friend few of us deserve but most of us would dearly love to have’.[1] The friendship between Jonathan and David can be compared with the love between Ruth and Naomi, in which Ruth makes the wonderful declaration that: ‘Where you will go, I will go; where you lodge, I will lodge; your people shall be my people and your God my God. Where you die, I will die – there will I be buried’; a commitment so profound that this promise from one woman to another is often read at weddings. The Book of Ruth tells us that Ruth was David’s great-grandmother; it is tempting to think that David inherited his capacity for inspirational friendship from her.

The friendship between David and Jonathan is described in language as beautiful and meaningful as the commitment Ruth makes with Naomi. In today’s reading we are told that: ‘the soul of Jonathan was bound to the soul of David and Jonathan loved him as his own soul … Jonathan made a covenant with David, because he loved him as his own soul’. The love between Naomi and Ruth is counter-intuitive, they are Jewish mother-in-law and Moabite daughter-in-law, and it demands great sacrifice from Ruth, who leaves her own country and her own people to accompany Naomi to Judah. The love between Jonathan and David is just as counter-intuitive, and demands equally great sacrifices.

Jonathan is a successful warrior against the Philistines, defeating their garrison at Geba. (1 Samuel 13:3) He is Saul’s son, and so potentially Saul’s heir. After Samuel’s secret anointing of David the spirit of the Lord is on David, he is in one sense already Israel’s king. But to all appearances Saul still rules, and there is a long way to go before David’s rule is completely affirmed. That affirmation begins here, with the performance of Jonathan’s love, the love of the man whose position as heir to the throne David has taken. The Bible tells us that: ‘Jonathan stripped himself of the robe that he was wearing, and gave it to David, and his armour, and even his sword and his bow and his belt.’ (1 Samuel 18:4) When David faced Goliath, Saul gave David his own armour, but David refused it because he couldn’t walk in it, and instead took five smooth stones and his sling. Now David accepts from Jonathan what he would not take from Jonathan’s father, and with Jonathan’s robe and armour he also takes Jonathan’s place. The robe is a symbol of Jonathan’s royalty; the armour a symbol of his leadership in battle; David takes both, and his new roles are confirmed when Saul takes David into his house, not letting David return to Jesse, and sets David over the army. All the people approve, and David is successful because the Lord is with him. David is now well on his way to the kingship; his public recognition beginning with Jonathan’s love and Jonathan’s gifts.

Saul has the opposite reaction. Initially he welcomes David, adopts him into his household, and makes him commander of his army. Then he becomes angry with David and, as he sees that God is with David, begins to fear him. He gives David his own daughter, Michal, as wife for the marriage present of 100 Philistine foreskins, thinking that the Philistines will kill David when he tries to involuntarily circumcise them. But David and his men succeed in collecting the foreskins and David marries Michal even though Saul still wants to kill him. ‘Jonathan [speaks] well of David to his father Saul, saying to him, “The king should not sin against his servant David, because he has not sinned against you, and because his deeds have been of good service to you; for he took his life in his hand when he attacked the Philistine, and the Lord brought about a great victory for all Israel. You saw it, and rejoiced; why then will you sin against an innocent person by killing David without cause?”’ (1 Samuel 19:4-5). Saul vows not to harm David, but later he again turns against him and it is David’s wife, Saul’s daughter, Michal, who manages to smuggle David out of the city. Jonathan again tries to mediate between his friend and his father and this time he is unsuccessful, ‘Then Saul’s anger was kindled against Jonathan. He said to him, “You son of a perverse, rebellious woman! Do I not know that you have chosen the son of Jesse to your own shame, and to the shame of your mother’s nakedness? For as long as the son of Jesse lives upon the earth, neither you nor your kingdom shall be established. Now send and bring him to me, for he shall surely die.”’ (1 Samuel 20:30-31) Like Michal, Jonathan manages to protect David by sending him away. At their last farewell David and Jonathan kiss each other and weep together, and the Bible tells us that ‘David wept the more’. (1 Samuel 20:41) But Jonathan says: ‘Go in peace, since both of us have sworn in the name of the Lord, saying, “The Lord shall be between my descendants and your descendants, forever”.’ (1 Samuel 20:42) See what I meant when last week I said that the story of David is a soap opera? 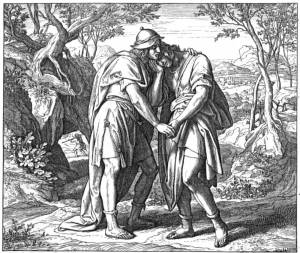 Saul was absolutely right in what he said to his son. Jonathan’s love of David is against his own interests. He is loving his rival to the throne. This is an amazing relationship, a friendship in God that overcomes the boundaries of birth right and birthplace and conventions of romance and traditions of loyalty. It is a love that David returns. Next week’s reading from the Hebrew Scriptures gives us David’s lament over Saul and Jonathan when he hears the news of their deaths and since I’m not going to be here next week I want to read it now. The Philistines kill three of Saul’s sons, Jonathan and Abinadab and Malchishua, and when Saul sees this he falls on his own sword and dies. The news is brought to David (who incidentally has the messenger, an Amalekite, killed). David then laments, ‘Your glory, O Israel, lies slain upon your high places! How the mighty have fallen! … Saul and Jonathan, beloved and lovely! In life and in death they were not divided; they were swifter than eagles, they were stronger than lions. O daughters of Israel, weep over Saul, who clothed you with crimson, in luxury, who put ornaments of gold on your apparel. How the mighty have fallen in the midst of the battle! Jonathan lies slain upon your high places. I am distressed for you, my brother Jonathan; greatly beloved were you to me; your love to me was wonderful, passing the love of women. How the mighty have fallen, and the weapons of war perished.’ (2 Samuel 1:19-27) Unlike Jonathan, David has pragmatic reasons for his relationship with the king’s son and potential heir, but this lament does not sound like the meaningless mourning of a man on the make. It’s one of the strongest declarations of love in the Hebrew Scriptures, worthy of the great-grandson of Ruth.

The Uniting Church turned 41 two days ago. Can the Church survive a discussion on same-sex marriage, or will it end at the next Assembly? I am predicting that it can. I believe that the things that unite us, our faith in Jesus Christ and desire to follow him, are stronger than the things that divide us, including our different attitudes to marriage equality. I believe that we will be able to live together in unity as kindred. That is not naïve optimism. It is faith based on what God has managed to do in the past. If David and Jonathan, who should have been sworn rivals, managed instead to be sworn friends, we too might be able to live together with those who deeply disagree with us. It is, of course, easier to live in unity with people who don’t think we’re going to spend an eternity in a lake of fire, but I have faith that God can overcome even this divide. ‘How very good and pleasant it is when kindred live together in unity!’ Thanks be to God. Amen.

Reading the books of Mabel Esther Allan in chronological order

Independent publishers of both contemporary and classic, neglected and translated books.

Putting elections under the microscope