Sermon: So, you want to have a king …

This Wednesday I asked those at the Wednesday Worship what they thought about today’s reading from the Hebrew Scriptures; the story of ‘all the elders of Israel’ asking Samuel for a king. Why, I asked, is this story in the Bible? They talked about it as a story about tithing or about human stubbornness, but none of the answers satisfied me. If we read today’s story as the Lectionary provides it to us, in isolation, it does seem to be a story of the people of Israel once again rejecting God, as they have done so often before, in their desire to be like the other nations. It provides the basis for a sermon on the human propensity to turn away from God and replace our allegiance to God with an allegiance to human things; as Jesus was to rebuke Peter a millennia later, ‘you are setting your mind not on divine things but on human things’ (Mark 8:33). But if we look at this story in its biblical context it is much more confusing.

The two Books of Samuel tell the story of David’s kingship. The book that our canon has put immediately before them is Ruth, the story of David’s great-grandmother. It tells of the birth of a son, Obed, to Ruth and Boaz and then says: ‘he became the father of Jesse, the father of David’. Immediately before the tiny book of Ruth was the much longer book of Judges which had the refrain, ‘in those days there was no king in Israel; all the people did what was right in their own eyes.’ (Judges 17:6, 18:1, 19:1). That was the last line of the book. Of course, what was right in the eyes of the people was usually wrong in the eyes of God. So, given that ending to the Judges, followed by the story of Ruth, we might expect the books of Samuel to be uniformly positive about Israel getting a king. Instead, we get today’s strangely negative introduction to the idea.

That the people of Israel might want a king had been foreseen in the Book of Deuteronomy. There Moses is shown as saying, ‘When you have come into the land that the LORD your God is giving you, and have taken possession of it and settled in it, and you say, ‘I will set a king over me, like all the nations that are around me’, you may indeed set over you a king whom the LORD your God will choose.’ (Deut 17:14-15) This is all that the people are asking of Samuel, something for which Moses has already given permission. But neither Samuel nor the LORD acknowledges this. Moses had provided limits to what a king could do: ‘he must not acquire many horses for himself … he must not acquire many wives for himself … also silver and gold he must not acquire in great quantity for himself’. (Deut 17:16-17) Now the LORD tells Samuel to warn the people that the king they want will do precisely the opposite; he will acquire great wealth and reduce the people to slaves, the very condition from which the LORD liberated them.

Samuel does as the people demand and the Lord commands, he anoints a king for them. But their first king is not David, it is Saul. The lectionary completely skips over Saul’s story; next week we will read about Samuel anointing David. But the Bible doesn’t. Saul, the son of Kish, is looking for his father’s strayed donkeys when he encounters Samuel. The Lord has told Samuel that he is sending him a king to be anointed and that ‘He shall save my people from the hand of the Philistines; for I have seen the suffering of my people, because their outcry has come to me.’ (1 Sam 9:15-16) This comes to pass although Saul at first protests, ‘I am only a Benjaminite, from the least of the tribes of Israel, and my family is the humblest of all the families of the tribe of Benjamin. Why then have you spoken to me in this way?’ (1 Sam 9:21) At the beginning of Saul’s story kingship is a good thing and something that God wants for Israel. 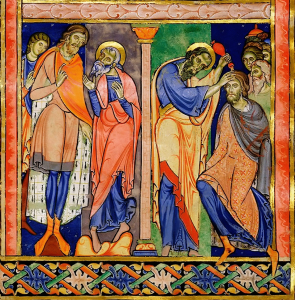 Initially things go well; Saul defeats the Ammonites in battle and all the people rejoice. But Saul’s rise to rule is quickly overturned. Twice Saul is shown to have disobeyed the Lord. The first time, Saul gets impatient waiting for Samuel to come to offer sacrifice and so offers it himself, which was like the Queen presiding at a Eucharist because the Archbishop of Canterbury was running late. Saul has usurped Samuel’s priestly role and Samuel tells him, ‘You have done foolishly; you have not kept the commandment of the Lord your God, which he commanded you. The Lord would have established your kingdom over Israel for ever, but now your kingdom will not continue’ (1 Sam 13:13-14). The second time Saul disobeys the Lord is when he is told to attack the Amalekites and utterly destroy them and all their possessions, but Saul instead spares their king ‘Agag, and the best of the sheep and of the cattle and of the fatlings, and the lambs, and all that was valuable, and would not utterly destroy them’ (1 Sam 15:9). The Lord is angry at his disobedience and Samuel tells Saul, ‘you have rejected the word of the Lord, and the Lord has rejected you from being king over Israel’ (1 Sam 15:26). Next week the reading from the Hebrew Scriptures will begin: ‘Samuel did not see Saul again until the day of his death, but Samuel grieved over Saul. And the Lord was sorry that he had made Saul king over Israel’ (1 Sam 15:35).

So, that’s the context of today’s reading. There was already provision in the Law for the people to appoint a king; the Book of Judges told us of the dangers of there being no king; and the Lord gave Israel Saul as king in order to deliver them from the Philistines. Saul very properly began his kingship by saying that he wasn’t worthy of it. He was a successful warrior and it was only later that he was rejected for disobeying God. Next week we will see him being replaced by another king; Israel will not return to the rule of judges like Samuel. And yet we have today’s reading in which the call for a king is seen as a rejection of the Lord.

There are two possible answers to the question of why this reading is here. The academic answer is to say that here we have preserved a tradition of the controversy caused by Israel’s development from a group of loosely connected tribes each governed by their own chief, to a centralised state under a single king. Technological improvements mean that the economy has moved from one of subsistence to one of surplus; the threats from groups like the Philistines have created the need for a single military power. But there are some people who look backwards, to the old days, and mourn the loss of Israel’s traditional polity. It is their voices that we are hearing in this story when the people ask for a king against the wishes of Samuel and the Lord.

If that is the academic answer, the religious answer is that there is no contradiction. The Lord did not want Israel to replace Him with a king; their request was another example of their stubbornness. But although the people of Israel had made their bed, the Lord didn’t force them to lie in it. Instead, the Lord took what had been intended to be a rejection of him and turned it to good by giving the people as their king David, the father of Solomon and ancestor of Jesus. That’s the reading that commentator Walter Brueggmann describes as ‘the conventional pious reading of the church’.

The twentieth-century English author Dorothy L. Sayers once spoke of the shock she felt when she first found the historical figure Cyrus, whom she’d met in the Histories of the Greek writer Herodotus, in the Bible; Cyrus ‘had marched clean out of our Herodotus and slap into the Bible’. The Bible is both a religious text through which we hear the Word of God and a collection of historical documents through which we can learn about the ways in which people lived three thousand years’ ago. Most importantly, the Bible is a collection of writings that shows us how people have wrestled with the question of who God is and how God wants us to live. Sometimes they have got it right; sometimes they get it very wrong. Do we really believe in a God who demanded that King Saul ‘kill both man and woman, child and infant, ox and sheep, camel and donkey’ (1 Sam 15:3) when waging war on the Amalekites? And yet the author of the books of Samuel obviously does. In the same way that we can be certain that the author of Samuel was wrong to attribute a desire for genocide to God, we can be certain that there are things that we believe about God today that will later be revealed to be wrong – because we are human and, as the Apostle Paul wrote, we currently only ‘see in a mirror, dimly’. When we try to clean up the Bible, smooth away the parts that contradict or challenge other parts, we lose the much necessary sense of humility that comes when we accept that there are things about God that we don’t yet understand.

Why does today’s reading contradict the celebration of kingship in other parts of the Scriptures? How could the same people both be certain that a king would make them slaves and sing in the Psalms, ‘Prolong the life of the king; may his years endure to all generations!’ (Psalm 61:6)? I don’t know. The only answer I can give is that life is complex and our faith is part of the complexity of life. Being religious doesn’t make things simple; sometimes it makes things even more complicated than they would otherwise be, because we believe that God has an opinion on political questions and that we need to take God’s opinion into account. That is what Samuel is doing today; taking God’s judgement into account. Maybe that is the message that this story has for us; that we cannot avoid political questions or decide them in the absence of God, even if we are not completely sure of what God wants. We can only make the best decisions possible, asking that God will correct us when we go wrong. Maybe that is what this story of Samuel and the elders of Israel has to teach us. Amen.