Sermon: In which Avril, surprisingly, preaches about Mothers’ Day

Sermon for Williamstown Uniting Church
Mothers’ Day, 14th of May 2017

Mothers’ Day is like ANZAC Day and Australia Day. It’s a day that isn’t marked in the Christian calendar, and that doesn’t completely mesh with the Christian faith, and yet it’s also a day that many church-goers want acknowledged. There’s been a lot of discussion on social media this week among ministers about whether and how to celebrate Mothers’ Day.

As you’ll have gathered from the prayers and Bible readings, I do want us to think about mothers today. But I want us to think about human mothers in the context of God as Mother. In today’s reading from the Hebrew Scriptures we hear Isaiah describing God as even more loving than a mother; and the psalmist comparing their relationship with God to the relationship between a calm child and their mother. (Incidentally, many commentators believe that this particular psalm was written by a woman, because the psalmist says that ‘my soul is like the weaned child that is with me’ and at the time a weaned child, or toddler, was more likely to have been with their mother than their father.) When the Bible wants to tell us exactly how tenderly God loves us, God is compared to a mother.

I’ve mentioned before the popularity in the middle ages of the image of Jesus, specifically, as Mother. One of my favourite medieval theologians, Julian of Norwich, had a very detailed theology of motherhood. In her book, Revelations of Divine Love, she wrote: ‘The mother’s service is the closest, the most helpful and the most sure, for it is the most faithful. No one ever might, nor could, nor has performed this service fully but [Jesus] alone. …This fair, lovely word ‘mother’, it is so sweet and so tender in itself that it cannot truly be said of any but of him.’

Mothers’ Day is a day on which mothers can recommit themselves to imitating God’s love and compassion and forgiveness. And it’s a day on which people who didn’t or don’t have loving mothers themselves are reassured that they can turn to God for the mothering that they need. Imagine the most loving human mother possible – and God’s love for us exceeds even hers.

But I want to move from talking about mothers, human or divine, to talking about a woman who may or may not have been a mother, but was definitely a wife. I decided to ignore the lectionary when choosing today’s Bible readings, and it’s only by ignoring the lectionary that we can even hear this story. The Revised Common Lectionary doesn’t include that story of the woman caught in adultery, although I bet that if we walked outside and asked people what it meant to ‘throw the first stone’ 99% of them would have some idea.

This is where I stop preaching and start speaking about Biblical scholarship. Feel free to zone out and I’ll let you know when we return to the sermon.

I suspect that the lectionary ignores this story because most biblical scholars agree that it doesn’t belong in the gospel according to John. That’s the gospel to which we have to turn if we want to read it but if you do that (you can do that right now with the Bibles under your seats) you’ll find that this story is printed within [square brackets]. This is because it’s considered a ‘doubtful passage’. The story just doesn’t appear in the earliest Greek manuscripts of the Gospel of John. When it finally does, in fifth and sixth century manuscripts, it’s usually marked with an asterisk, probably to indicate the scribe’s opinion of its dubious nature.

It’s not just that this story doesn’t exist in the earliest manuscripts, it’s also not very Johannine. The expressions ‘Mount of Olives’ and ‘scribes and Pharisees’ are used nowhere else in John, but they are frequently used in the synoptic gospels, which is why they sound so familiar to us. More importantly, the very nature of the story, a controversy with Jewish leaders while Jesus is teaching in the Temple, is more synoptic than Johannine and in fact some manuscripts locate this story at Luke 21:38. It’s a story in which the scribes and Pharisees try to trick Jesus. They tell him: ‘Now in the law Moses commanded us to stone such women. Now what do you say?’ Jesus has to choose between affirming the law of Moses and challenging the Roman authorities who wouldn’t allow anyone to inflict capital punishment but themselves, or refusing to condemn the woman and so refusing to obey the law of Moses. It’s just like the challenge about whether or not it’s lawful to pay taxes to Caesar (Luke 20:25) or the question about whose wife the woman with seven husbands would be in heaven. (Luke 20:33), stories told in Matthew, Mark and Luke.

So, if this story wasn’t included in the earliest manuscripts of John, why was it added to later ones? There’s broad agreement among scholars that this story preserves an authentic piece of Jesus’ history. It fits with what is known of contemporary Jewish custom, for example, that it was the accuser in a death penalty case who would be the first to throw the stone. It fits with the tradition that about the year 30 the Romans took away from the Sanhedrin the right of capital punishment. And it fits with everything else we know of Jesus and the way he responded to women and to sinners and to women who sinned.

It’s Jesus’ radical interactions with women that might explain why it took so long for this story to be included in the canon. This story portrays Jesus as more lenient than the early church, which was very anti-adultery and punished it severely. Maybe it was only as the church became less strict, or more secure, that this still-circulating piece of authentic tradition was able to be included in the canon, and was put into the Gospel according to John a few verses before Jesus is quoted as saying: ‘You judge by human standards; I judge no one’ (John 8:15). Luckily it did eventually find a home in the gospel, because it’s a story well-worth our time.

And now we’re back to the sermon; please tune back in if you’ve tuned out. 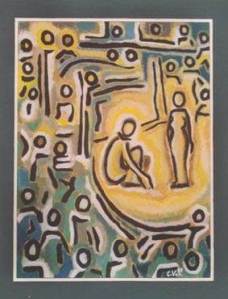 Jesus invites both the Pharisees and scribes and the woman to live new lives. Both parties have been trapped by the old ways of life, and both have been condemned, but now both are given the possibility of freedom. The scribes and Pharisees have been responding to sin with condemnation and punishment, rather than forgiveness and restoration trapped in retribution; the woman has been condemned rather than forgiven and faces death rather than life. In their encounter with Jesus both accept the offer of freedom: the scribes and Pharisees by leaving the scene, deciding not to stone the woman; the woman by remaining after they have left to hear the judgment of the man who saved her. Both leave behind death and choose new life.

In both cases, Jesus’ interaction leads to the identification of people as individuals. The woman was originally placed ‘in the middle’ of the gathering, an object on display, given no name, no voice, and no identity apart from the accusation that she is an adulteress. When he is left alone with her Jesus looks at her and speaks to her, treating her as an individual, refusing to condemn her, and healing her, sending her to live a life without sin. The Pharisees and scribes were originally a mob, seeking rough justice. After Jesus addresses them they depart ‘one by one,’ not as an undifferentiated crowd but as individuals, recognizing that the law of condemnation no longer applies.

There are so many questions that this story leaves unanswered. Where is the woman’s partner in adultery; why is she standing alone facing death? What was Jesus writing with his finger? The Church fathers suggested various answers to that question. Ambrose says that Jesus was writing the names of the sinning ‘scribes and Pharisees’ on the ground, in contrast to the names of the righteous which are written in heaven. Jerome said that Jesus was writing the sins of the accusers on the ground. Some ancient manuscripts actually include this, so that verse 8 reads ‘And once again he bent down and wrote on the ground the sins of each of them.’ The truth is we’ll never know, and it’s not actually important.

When confronted by sin, Jesus refuses to condemn and punish, and instead offers forgiveness and restoration. Jesus offers freedom to both the sinner and her judges, seeing everyone involved as individuals. It’s not surprising if the early church saw this story as undermining its own authority to condemn and punish, and so left it out of the gospels. And it’s not surprising that medieval theologians like Julian of Norwich saw a loving and forgiving mother in Jesus. Today, gender roles are not as strict as they were in either Jesus’ or Julian’s times, and men as well as women can be loving and tender. So, just as today can be a day for mothers to recommit themselves to imitating God’s love and compassion and forgiveness, so it can be a day for all of us, both women and men, both those who are parents and those who aren’t, to recommit ourselves to being kind and gentle and merciful, as Jesus was. As Christians we are called to imitate Jesus, and that includes saying to sinners, including ourselves when we sin: ‘Neither do I condemn you. Go your way, and from now on do not sin again.’ Amen.

This entry was posted in Sermons and tagged forgiveness, Isaiah 49:13-18, Jesus was a feminist, John 7:53-8:11, Mothers' Day, Psalm 131, sexual impropriety. Bookmark the permalink.