It’s such a quick transition; from the crowds who spread cloaks and cut branches to put under Jesus’ feet, to the crowds who yell, ‘Crucify him!’ It didn’t happen quite as quickly as it did this morning, but it still seems to have been an unusually rapid change of mood.

Matthew is more concerned than the other gospel writers with allocating responsibility for Jesus’ death. It’s Matthew, for example, who takes time during the Passion narrative to tell us about Judas’ response to his betrayal of Jesus. According to Matthew, Judas repents very quickly. As soon as Jesus is condemned Judas brings the thirty pieces of silver he was paid back to the chief priests and the elders and tells them that he has sinned by betraying innocent blood. In repentance, he throws down the money, and then goes to hang himself. It’s too late by then; despite his attempt he cannot absolve himself. He remains the betrayer.

Judas’ revulsion at what he’s done doesn’t affect the chief priests and the elders. Their only concern is what to do with the money. They can’t put blood money in the temple treasury, so they use it to buy a field in which to bury foreigners. Since they condemned Jesus in a show trial they must be as aware as Judas was that they have condemned innocent blood, but they’re callously indifferent to it. They try to refuse any responsibility: ‘What is that to us? See to it yourself’, but they, too, are implicated in Jesus’ death.

After Judas and the chief priests and elders, the third attempt to avoid responsibility comes from Pilate. Only in Matthew do we hear of the dream of Pilate’s wife and her warning to Pilate: ‘Have nothing to do with this innocent man, for today I have suffered a great deal because of a dream about him.’ We’re never told what the content of the dream was, but my favourite imaginative version comes in a play by Dorothy L. Sayers in which Pilate’s wife describes people in ‘all tongues and all voices … even the little children with their mothers…’ saying over and over again ‘… your name, husband, your name continually – “he suffered under Pontius Pilate”.’[1] The play comes from 1943 and I’ve never heard or seen it, but just reading that line makes me shudder.

So Pilate, too, tries to turn away. Again, only Matthew tells us of Pilate’s meaningless gesture: ‘he took some water and washed his hands before the crowd, saying, “I am innocent of this man’s blood; see to it yourselves.”’ But as Sayers’ play points out, he fails miserably. Over thousands of years, in every nation on the earth, in every language, people have repeated those words: ‘suffered under Pontius Pilate’. 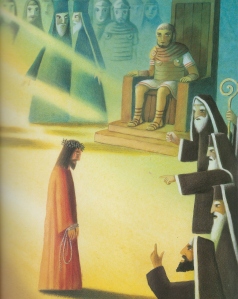 Finally, we come to the only people who are happy to be judged for Jesus’ death; the crowd, the people as a whole. Again, it is only in Matthew that we are told that they answer Pilate: ‘His blood be on us and on our children!’ Matthew has good reasons for writing this scene. Two generations after Jesus most Jews had rejected Jesus as Messiah. In the contest between Christian Judaism and rabbinic Judaism, rabbinic Judaism had won. So Matthew writes this scene in which the Jewish rejection of Jesus is seen during the Passion itself. The other reason for this line is that in 70 AD, in the time of ‘the children’ of this crowd, the Temple and much of Jerusalem were destroyed by the Romans. It must have seemed to Matthew that that destruction was divine punishment for Jesus’ death.

Here I need to pause for a moment, because this one line in Matthew has been used by Christians throughout history to justify the most disgustingly unjustifiable anti-Semitism. Christians have taken Matthew’s ‘us and our children,’ a reference to two generations, and interpreted it as applying to all Jews throughout time. Even if Matthew had been describing an actual historical event in which the Jewish nation took on responsibility for Jesus’ death, which it’s clear he isn’t, there could be no excuse for the ways in which this phrase has been misused. As we remember Jesus’ death, we need to acknowledge with horror the deaths that Christians have committed in response.

Theologically, the crowd accepts that Jesus’ blood is on them. And, theologically, this crowd represents us. We are both the people who spread cloaks and cut down branches to welcome Jesus, crying out ‘Hosanna to the Son of David!’ and the people who shout: ‘Let him be crucified!’ In one of my favourite Holy Week hymns, ‘When his time was over’ there is the line: ‘Jesus, please forgive me, you know what I am: I was one who nailed your hands when our life began again.’[2] But I’m a historian, before I’m a theologian, and so I want to know how it is that people can ever call for the deaths of other human beings. Jesus’ crucifixion and resurrection shows God’s abhorrence of violence; God’s willingness to die rather than fight back with swords and twelve legions of angels even in self-defence. Yet human beings continue to kill other human beings, even those who have done them no harm.

People who know me know that I read any and every type of book, except true crime and cook books. Recently I’ve been reading some children’s books written by Australian author Jackie French, and she’s also had me pondering this question. French has written two books about children living in Nazi Germany, Hitler’s Daughter and Pennies for Hitler. The protagonist of Pennies for Hitler, Georg, has a father who is exactly as Jewish as I am. Georg’s father had a Jewish grandfather who didn’t practice his faith and who married a Gentile, so he had one Jewish grandparent and would not be considered Jewish by Jews, and yet at the beginning of the book Georg’s father is murdered by the Nazis. Georg, who has lived in Nazi Germany all his life, cannot understand this:

Georg still didn’t understand how he could be Jewish – how Papa could be and Aunt Miriam too. Papa never killed babies. He wasn’t even rich, as Jews were supposed to be.

Could … could the Fuhrer be wrong, and Jews weren’t all evil? Or was he different from other Jews, and Papa and Aunt Miriam too, because they were only a little bit Jewish, so it didn’t count?

If the Fuhrer was wrong about Jews perhaps he was wrong about other things. About the English being weak and cowardly, about the French being arrogant and treacherous, about Americans being ruled by Jews and bankers.[3]

Pennies for Hitler is a wonderful book, even though it made me cry several times and I once had nightmares after reading it last thing before going to sleep. And French gives one answer to that question that haunts me: how can people be willing to shed innocent blood? The answer is: because they have been taught that the blood isn’t innocent.

This week I put an ad for the Palm Sunday March for Refugees on the Williamstown Uniting Church Facebook page. This drew responses from people who have nothing to do with either Williamstown or churches. They were people who believe that all refugees are Muslim, and that all Muslims are terrorists. They couldn’t conceive that refugees might be fleeing the very terror they condemned. They made comments like: ‘It’s one thing to love your enemies – it’s an entirely different thing to invite them in so they can kill you, and your children and your grandchildren and me and my children and my grandchildren!’ and ‘They have proven to be a hateful race. And have destroyed a multitude of countries around the world.’ They repeated the popular lies about refugees getting more help from the government than other people. I initially responded with theology, and with facts from the Refugee Council, but then I gave up, because the comments were making me feel sick. They bore too much resemblance to Nazi propaganda, and there’s only so much of it I can read before wanting to vomit.

Biblical commentator Raymond Brown has described Matthew’s version of the Passion as full of the ‘haunting issue of responsibility’.[4] In the end the people as a whole accept responsibility for Jesus’ death, and we Christians recognise that the people responsible include us. That means that among our responses to Jesus’ death must be a commitment to do all we can to prevent all similar deaths. We see in Jesus on the cross every innocent victim of political expediency and hate. In every innocent person hated for their race or religion or nationality or gender or sexuality we see Jesus.

For centuries the Passion narratives were used as an excuse by Christians to discriminate against, hate, and ultimately kill, Jews. We have now realised how great an evil that was, and how deeply the church sinned. And yet people who claim to be Christian continue to hate others on the basis of their faith – only it’s Islam today instead of Judaism.

As today we acknowledge our role in Jesus’ death, let us commit ourselves as Christians to never ever again be indifferent to, or guilty of, innocent blood. Loving God, give us mercy and grace, Amen.