Posted on January 3, 2016 by Avril Hannah-Jones

I’m going to begin today’s sermon with a bit of history, because I love tracing the intersection between the Bible and popular culture. As I have told you all many, many times, the magi, whose visit to Jesus we celebrate today, were not kings. Nor do we know how many of them there were. Nor do we know where they came from, beyond the rather vague designation of ‘the East’. And despite their presence in the nativity scene that you all walked past to enter the church today, they did not visit Jesus while he was lying in a manger.

Yet I can guarantee that if we walked out of here today and asked any random passer-by who had some vague idea about the Nativity story: ‘Who visited Jesus in the stable?’ they would include in their answer ‘the three kings’. So how did the magi of unspecified number become ‘we three kings of Orient are’?

The magi are the only non-Jews in the Christmas stories, unless we count Luke’s mention of Emperor Augustus and Quirinius, governor of Syria. As the church became increasingly Gentile, Christians became more interested in these wise men. They looked for more information about them, and embroidered what information they had.

The reading from the Hebrew Scriptures that the lectionary gives us on the Epiphany is from the Prophet Isaiah. The Book of Isaiah was so popular among early Christians that it has been called the fifth gospel. Early Christians believed that Isaiah had written about Jesus, and so they read every part of it as prophecy about him. In the reading for today we hear that: ‘nations shall come to your light, and kings to the brightness of your dawn’ and that ‘they shall bring gold and frankincense’. (Isaiah 60:3, 6). The only representatives of the nations at Jesus’ birth were the magi, and they did bring gold and frankincense among their gifts, so early Christians decided that they must be the kings about whom Isaiah was prophesying.

The number of wise men was unknown, but there were three gifts, and in Genesis 26 Isaac met three Philistine men, the king, the commander of the army and the king’s advisor, who recognised that God was with Isaac and made a covenant with him. The third-century theologian, Origen, decided that these three non-Jewish men were precursors of the non-Jewish wise men. Ever since, most Christians have accepted that there were three. In the sixth century, though, Syrians began to claim that there were twelve, paralleling the twelve Apostles. Matthew doesn’t give a number, so there could be three or twelve – or any number more than one, since there are ‘men’, not ‘a man’.

A sixth-century chronicle gives the names of the now three wise men as Bithisarea, Melchior and Gaspar. Bithisarea was more commonly spelt Balthazar and is probably a corrupted form of the name given to Prophet Daniel in the Babylonian Court. Melchior may derive from two Hebrew words, melek meaning king and or meaning light. Casper or Gaspar may be a corruption of the name Godaphar, a famous Indian king who appears in the apocryphal Gospel of Thomas. The names are fictitious and we don’t know who decided that these were what the wise men were called, or why. But tradition now tells us that the three kings from the East who visited Jesus were Balthazar, Melchior and Casper.

Saint Augustine claimed that the wise men represented the entire Gentile world. The Venerable Bede, an Englishman living in the seventh century, decided that this meant that each wise man represented one of the three known parts of the world: Asia, Africa and Europe. From then on, artists often pictured the three kings as Asian, African and European.

The picture on the screen comes from the Jesus Storybook Bible, which the Electra-Lights are reading, and, as you can see, in drawing the magi the illustrator has used the tradition that an Asian, an African and a European visited Jesus. 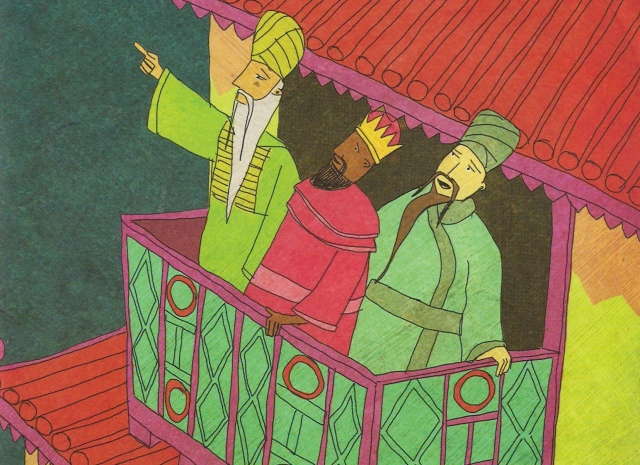 That’s some of the post-biblical interpretation that turned the magi of unspecified number into three kings called Balthazar, Melchior and Casper. I love exploring such developments, but I’m now going to remove my historian’s hat and put on my preacher’s hat for a few minutes.

Last year at Epiphany I preached on the reading from Matthew’s gospel and on what followed immediately after the story we hear today: the flight into Egypt of Joseph with Mary and Jesus; and the massacre of all the children in Bethlehem under two years’ of age. Those stories are among the reasons that churches are so concerned that refugees are welcomed and find refuge, as Jesus and his parents found refuge in Egypt. If you’d like to read that sermon, which I think is just as relevant this year as last, it’s on my website. Today I’d like to talk about the reading from that ‘fifth gospel’, the Book of Isaiah.

As I remind you every time we hear from Isaiah, most commentators believe that the book we call ‘Isaiah’ contains three different prophecies from three different prophets known by the incredibly original names of First, Second and Third Isaiah.  There is widespread agreement among the people who know such things that First Isaiah prophesied in the eighth century warning Judah and Jerusalem of the destruction to come; Second Isaiah prophesied after that destruction and offered the people in Babylon hope in their Exile; and Third Isaiah, from whom we hear today, wrote in the sixth century BC, after the Babylonian Exile had ended, when many of the Jewish exiles had returned to Jerusalem.

Third Isaiah offers hope to the people who have returned from Exile, but whose expectations remain unfulfilled. They have returned home, but their life is still difficult. The Temple had been destroyed and twenty years after the end of the Exile it still hasn’t been rebuilt. When it is eventually rebuilt, it is no longer the glorious Temple of Solomon, and the very act of rebuilding it has caused conflict between different groups. There is no new and glorious kingdom. And so Third Isaiah tells the people to keep looking forward to God’s future and the new creation that God will bring to birth.

‘Arise, shine; for your light has come’. These are commands, demands addressed to Jerusalem. Third Isaiah is honest about the reality of the darkness that covers the world: ‘darkness shall cover the earth and thick darkness the peoples’. Third Isaiah would not be at all surprised that in the twenty-first century, with all our knowledge and all our resources, there are still wars and rumours of wars, people still go hungry in a world of plenty, humanity remains divided by race and nationality and class and gender and sexuality. Third Isaiah, after all, had seen the great hopes of post-Exilic Jerusalem disappointed. And yet, Isaiah would demand that we arise and shine, because the glory of the Lord has risen upon us, even in the midst of the world’s darkness.

It takes only the tiniest light to challenge the darkness, and the deeper the darkness is, the more that light shines. There is a reason that the symbol of Amnesty International, which campaigns for prisoners of conscience around the world, is a candle shining despite the barbed wire that surrounds it.

Third Isaiah reassures the people whose country was invaded and destroyed and who were forced into exile that they shall receive restitution. Later on in chapter sixty we read ‘Foreigners shall build up your walls and their kings shall minister to you’ (Isaiah 60:10) and ‘The descendants of those who oppressed you shall come bending low to you and all who despised you shall bow down at your feet (Isaiah 60:14). Isaiah’s prophecy is good news for everyone who looks at the unfairness of the world and the oppression of the weak by the strong, and cries out that it’s not fair. According to Isaiah, God agrees that it’s not fair and God is doing something about it. We believe that one of the things that God did was to come and live among us, which is what we celebrate during this Christmas season.

We, too, have a part to play in enabling God’s light to shine. Today, Epiphany, we commemorate the first revelation of God’s glory to Gentiles like us. We have seen the light, and Isaiah reminds us that our response to the coming of the light must be to shine ourselves. At every baptismal service the newly baptised person is told that they belong to Christ, the light of the world, and is commissioned to let their light shine before the world so that glory might be given to their Father who is in heaven. Those who have seen the light are commissioned to share the light. By following Jesus and imitating Christ we can live in such a way that God’s light shines through us to illuminate the world.

‘Arise, shone, for your light has come and the glory of the Lord has risen upon you’. At Epiphany we celebrate the coming of the light; but it’s not enough for us simply to observe it and enjoy it. We are to reflect God’s light to the entire world, until everyone is able to proclaim the praise of the Lord. Let God’s light, seen in us, so shine before the world that all may see our good works and give glory to our Father who is in heaven. Amen.