On Tuesday I attended the funeral of the last of my grandparents, my paternal grandmother, Nancy Evelyn Jones (known as Evelyn, never Nancy). She was 95 years old and we had a conversation last year in which she told me that she was ready to die, so her death was the opposite of untimely. It was expected; wanted, even. So I’ve been surprised at how much it has affected me. 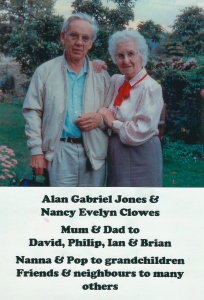 Neither Nanna nor Pop was physically or verbally demonstrative, they were stereotypically ‘English’, and while I loved them and knew that they loved me my relationship with them felt slightly detached. And yet I’ve found myself crying at unexpected moments this past week; mourning the loss of my last grandparent and so also mourning an important piece of my childhood and my own identity.

With my grandparents (and Alexander Leeper).

Ten years’ ago my then supervisor, the extremely helpful Rev’d  Dr Richard Treloar of Trinity College, gave me a copy of Gerald Manly Hopkins’ poem, ‘Spring and Fall: To a young child‘, as we discussed my over-identification with grieving families and friends at funerals (unhelpful for the minister conducting the service). I have never forgotten the last two lines: “It is the blight man was born for/It is Margaret you mourn for.” Those lines have been replaying in my head this past week. I am mourning Nanna, but I am also grieving the reminder of my own death. The last of my grandparents is gone; only my parents’ generation separates me from death. I know that death can come at any time; it just feels a lot closer now.

The funeral service was, of course, a secular one. Both Nanna and Pop were committed atheists. This was fine, except that the service didn’t include anything like the Prayer of Confession in the Uniting Church funeral service, which includes the lines:

Father, forgive us
if there have been times when we failed N.
Enable us by your grace
to forgive N anything that was hurtful to us.

I needed that prayer! I needed to ask forgiveness for, for example, not visiting Nanna often enough once she moved into the nursing home. Without it I just didn’t feel the slate was clean, and I wanted to say good-bye to her with a clean slate. Luckily, a colleague came round the day after the funeral and took me out for lunch. I confessed my guilt to her as she sat across from me at a table in ‘Kebabs by the Bay’, and she looked into my eyes and said, “Avril, your sins are forgiven”. The weight was lifted.

Here is what I said at the funeral.

Some Memories of Nanna

The last time I had a conversation with Nanna I walked into her room at Regis and she looked at me with furrowed brow. I thought maybe she didn’t recognise me so I said, “It’s me, Nanna – Avril.” “Yes,” she said, “I know. I just wasn’t expecting the red trousers.”

I don’t think that Nanna ever approved of my dress sense. For a while, when I was in my late teens and early twenties, she gave me petticoats and slips as birthday presents. I never quite worked out whether she was confusing me with another grand-daughter; whether she just thought they were suitable presents for someone of my age; or whether she was hoping that I would develop into the sort of woman who wore dresses. If it was the last, sadly that never happened.

Samantha, Murray and I have many memories of Nanna. Some of them, like the petticoats as presents, are perplexing, but most of the memories are good and we’d like to share some of them with you. They almost all involve Nanna and Pop together, because for us Nanna-and-Pop always came as a pair.

We remember Nanna’s African violets, and the terror I felt whenever I was responsible for keeping them alive. We have food memories: soy milk (long before it was trendy); the dessert known as ‘Pop’s ice-cream’, milk-free, sugar-free, taste-free, which Samantha and I hated, but Murray says was good as long as you didn’t approach it expecting it in any way to resemble actual ice-cream; orange juice mixed with lemonade; and passionfruit icing. We remember Harry the Horse, on whom we all rode (me for the last time in my 30s to amuse Damian); homeopathic remedies; gardening; and Nanna’s little white Gemini.

Nanna and Pop gave us books. One of Samantha’s favourite childhood books, The Smallest Frog in the World, was a gift from them, and two of Damian and Olivia’s absolutely favourite books, Rattletrap Car and We’re Going to Feed the Ducks, were also gifts from Nanna and Pop. I still have the copy of Now we are Six that they gave me in 1979 and the copy of The Prisoner of Zenda that they gave me in 1982. Murray doesn’t remember any books, but he does remember them giving him an inflatable globe, which he describes as an “accidentally cool” educational present. For me, those books make up for the petticoats as presents.

The other thing that more than makes up for those petticoats is the financial support Nanna and Pop gave me every time I went to the UK. For my first trip they gave me bus vouchers, so I was able to travel all over England, Scotland and Wales at their expense. For later visits there were cheques, which were always helpful.

They took Samantha to Sydney for a week when she was majoring in tourism management at university, to broaden her travel experience.  She explored Sydney with them, and then returned alone to spots that she thought were particularly interesting while they rested in the afternoon. That was Samantha’s first visit to Sydney and she’s grateful that they took the time and spent the money to take her.

Nanna and Pop were the grand-parents who took us to grown-up places. I saw one of my first live performances, Blithe Spirit at the Playhouse, with them. They took Samantha out for dinner in the city at a ‘proper’ restaurant as part of her 13th birthday present. They also took Samantha and Murray to see the QE2 when it was in port and through the invitation of some passengers, described by Nanna as “very American,” they all had afternoon tea on board. Murray and I think that the experience of the QE2 might have been one of the sources of Samantha’s current appreciation of the finer things of life. 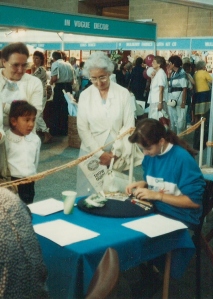 When our Grandpa Hannah died in 1984, Samantha, Murray and I were dropped off at Nanna and Pop’s unit and they looked after us all that day. It was Nanna who told Samantha and me, late that afternoon, that Grandpa was dead. Nanna and Pop weren’t physically affectionate, but it was on days like that that we saw how they loved us.

I know that Nanna didn’t believe that there was anything beyond this life, and that when Meredith asked her Nanna said that she didn’t think she would be reunited with Pop in any way after death. But I have faith that there is something beyond this life, even though I have no idea what form it takes, and so I’m able to hope that she and Pop have been reunited somehow. Over these past years seeing Nanna without Pop has felt wrong and I hope that they’re now Nanna-and-Pop again, the way we remember them.

Go in peace, Nanna. I love you and I miss you.

This entry was posted in Reflection and tagged death, family, funerals, memories. Bookmark the permalink.