Sermon for Williamstown
The Second Sunday after Pentecost

On first hearing, today’s story from the Gospel according to Luke sounds simple. Someone is sick, to the point that he’s about to die, and Jesus, the one who came to heal the sick, makes him well again. Jesus’ power as a healer is so great that he doesn’t even need to be in the same place as the sick person to heal him; Jesus’ authority over everything that causes illness is so complete that he can simply order the illness to go, and it does. This is a story about Jesus the healer, the wonder-worker, the one whose identity is seen in his ability to perform miracles. Because he healed those around him then, we can pray for healing now; as one of the hymns in our hymn book says: ‘O Christ, the healer, we have come to pray for health, to plead for friends’.[1] The end. Sermon finished.

It probably won’t surprise you that I’m not going to stop there. Yes, this is in part a miracle story, a story of Jesus’ healing. But that’s far from all this story is. We’re in the Gospel according to Luke, so it should be no surprise that this story is also about insiders and outsiders; about the way that the community Jesus creates extends beyond those known to be faithful to those who are considered enemies. It’s a story about the interaction between Jews and Gentiles, between elders and soldiers, in the kingdom of God that Jesus is initiating.

With this story we’re back near the very beginning of Jesus’ ministry. Immediately before this, Jesus has delivered the Sermon on the Plain, Luke’s equivalent of Matthew’s Sermon on the Mount. In it he tells his listeners: ‘Love your enemies, do good to those who hate you, bless those who curse you, and pray for those who mistreat you.’[2] And now, indirectly, Jesus is approached by one of those enemies. The man seeking his help is a centurion; a Roman soldier; a member of the force occupying Judea and Galilee. His job is to be an oppressor of the Jewish people, and yet he initiates a conversation with a Jewish healer.

The centurion is obviously aware that what he’s doing is unusual, because he doesn’t approach Jesus directly. Instead he sends some Jewish elders to speak for him. They tell Jesus: ‘This man really deserves your help.  He loves our people and he himself built a synagogue for us.’ The centurion is probably a God-fearer, a Gentile attracted to Judaism because of its ethical teachings and monotheism, but one who hasn’t taken the final step necessary for becoming a Jew – circumcision. According to the Jewish elders who speak for him, the centurion is a man who is generous and compassionate. But he’s also a Roman soldier.

According to Luke, Jesus began his public ministry by preaching in Nazareth. We’ve already talked about that first sermon, which revealed that Jesus hadn’t come to reassure the insiders who believe that God is with them; he’d come to welcome the outsiders into God’s family. The stories he used from the Hebrew Scriptures to illustrate his point, the stories of Elijah being sent to widow living in Zarephath in the territory of Sidon in a time in famine and Elisha healing Naaman the Syrian, are stories of God reaching out to those who don’t belong to the people of Israel. The God that Jesus came to reveal is a God who cares not just about the Jewish poor, captives, blind and oppressed, but about all of them, of whatever race or religion. The God that Jesus proclaims is a God who welcomes outsiders.

Now Jesus himself is confronted with what this means. Jesus himself is surprised at the faith of the Roman centurion, who recognises in Jesus such authority that he can give an order, and the centurion’s servant will get well. Luke tells us that: ‘Jesus was surprised when he heard this; he turned around and said to the crowd following him, “I tell you, I have never found faith like this, not even in Israel!”’ We need to learn from Jesus’ surprise. This healing story has the same sort of topsy-turvy, world-turned-upside-down, significance that Jesus’ parables have; it’s like the stories of the Good Samaritan, the mustard seed as metaphor for kingdom of God, the devout and humble tax collector contrasted with the self-righteous Pharisee. A Roman soldier, a member of the occupying force, someone of whom people would rightly be suspicious, petitions Jesus for a miracle. The soldier, usually in a dominant position with the people, is deferential. First reversal. Then Jesus praises the centurion’s faith as stronger than that of the people of Israel. Second reversal. This isn’t just a story of healing.

So, what can we learn from this topsy-turvy story? The same thing we learn from almost every story of Jesus meeting with people: the kingdom of God is not limited to those that we think worthy, to the insiders, the faithful. The kingdom of God welcomes everyone; as I say again and again, the kingdom of God includes Jews and Gentiles, men and women, the free and slaves, adults and children, Pharisees and tax-collectors, scribes and sinners. Here it includes Jewish elders and a Roman centurion and his friends. Everyone’s welcome, no matter our race or nationality or gender or age or sexuality or social status, and that’s a reason for us to rejoice. It also means that we shouldn’t be surprised when we find faith and compassion and generosity in people outside our community. The Jewish elders experienced the centurion’s generosity; Jesus marvelled at the centurion’s faith. Someone who didn’t belong to the people of Israel showed an ability to live out the instructions of the Sermon on the Plain. People outside the church continue to show that ability today.

One last thing: the translation that we heard read today refers to the person who needs healing as the centurion’s ‘servant’. But the Greek word is doulos, ‘slave’. The centurion is seeking healing for his slave. His slave is very dear to him, but he’s still a slave; this isn’t the case of a friend or family member approaching Jesus; this is an owner seeking help. We can’t use this story to deny the horrors and absolute wrong of slavery, but we can use it to remind us of the importance of those of us with a voice speaking on behalf of the voiceless in society. The centurion has status in his society; his slave doesn’t. So the centurion seeks for help and healing on his slave’s behalf. We follow the example of this compassionate, faithful, generous outsider every time we speak on behalf of those who cannot speak for themselves; people like asylum seekers held in detention centres.

An outsider who has greater faith than insiders; a member of an occupying force who shows generosity to those under occupation; a soldier who speaks on behalf of a slave. Today’s story tells us that we can all turn for healing to Jesus, the one with authority over everything that harms or denies life. But even more importantly, today’s story provides us with an example to follow, in the very unlikely form of a Roman centurion. 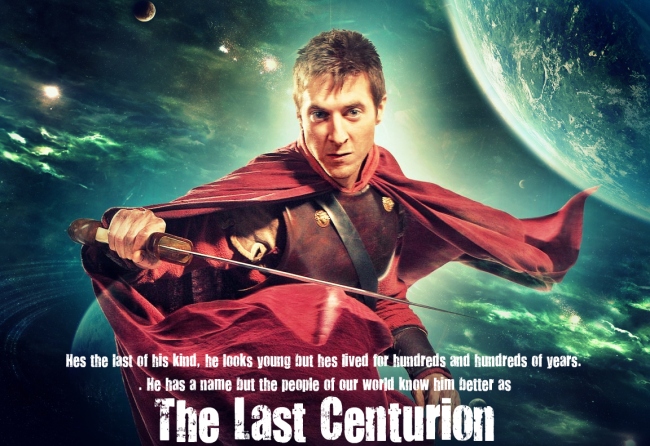 I couldn’t help it! Rory Williams from Doctor Who as The Last Centurion

This entry was posted in Sermons and tagged healing, Luke 7:1-10, outsiders, Sermon, Year of Luke. Bookmark the permalink.