What we are doing here this morning is profoundly counter-cultural. To begin with, we are gathering together in community in order to encounter God. I suspect that if we asked the majority of Australians where they encountered God, they would tell us that they found God by the sea, on the mountain, in the bush, or in the rugged red heart of the country. They might say that they encounter God in the love of family and friends; in the curl of a new-born baby’s hand around their finger; in the smile of a 90-year-old. Very few Australians would say that they encounter God when gathered with a motley crew of ordinary people in a suburban church on a Sunday morning. That is if they even believe there is a ‘God’ to be encountered at all. 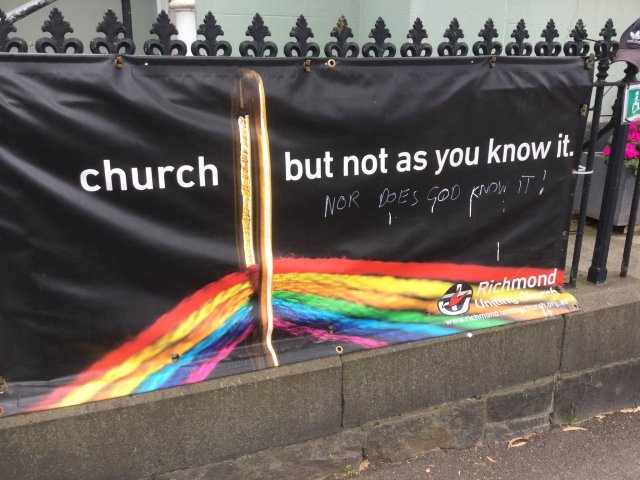 Good to preach at a church so welcoming that its sign is graffitied!

The church has always challenged the world’s beliefs about the Being we relate to as ‘God’. At times this has meant telling a racist community that God created both black and white people in God’s own image. At other times it has meant telling a sexist society that God has given women, as well as men, gifts and skills; God-given gifts, to be used. A few centuries ago, the church challenged the idea of God as a ‘watchmaker’ who set evolution in motion but then had nothing more to do with the universe. In the face of that eminently sensible theory the church continued to insist on a Creator so intimately involved with the creation that in Jesus God took on humanity and lived among us.

In Australia today the church continues to talk about God in the face of a world that believes everything can be explained by science, a world that believes that only the stupid could possibly still be religious. I spend a lot of my time talking to committed atheists both face-to-face and online, and I am often told that I am just too intelligent to believe. Some sociologists of religion have called the church a ‘cognitive minority’.[1] I prefer to describe us as ‘counter-cultural’.

Belief in God as Creator and the world as God’s good creation has always been counter-cultural. It has always seemed to be contrary to the facts. At the moment we are all deeply aware of the climate emergency facing the world, and particularly the horrors of bushfire and drought here in Australia. How can we look at the fires destroying homes and lives, and say that God cares about creation? The author that we know as ‘Third’ Isaiah, from whom today’s reading from the Hebrew Scriptures comes, had the same challenge. The description of God’s holy mountain as a place where all creation is renewed seems completely unrealistic. But there was nothing fanciful in what Isaiah was doing.

Third Isaiah was writing in the sixth century BC, after the Babylonian Exile had ended. The Exile was over, the Jewish people were now free to leave their captivity in Babylon and return home to Jerusalem, and yet the expectations of the people hadn’t been fulfilled. There had been tremendous hope in the prophecies of the prophet we call ‘Second’ Isaiah that the return from Exile would be a second Exodus from Egypt, leading to prosperity and joy. That hadn’t happened. Life was difficult. The Temple had been destroyed and twenty years after the end of the Exile it still hadn’t been rebuilt. When it was eventually rebuilt, it was no longer the glorious Temple of Solomon, and the very act of rebuilding it had caused conflict between different groups. There was no new and glorious kingdom. It is in the midst of this despair that Isaiah speaks of a new creation.

Isaiah reminds those returning from Exile that the Jewish faith believes that the world is good. The first creation story in the Book of Genesis describes what the creation is meant to be – ‘And God saw that it was good’. And yet to anyone with eyes it is obvious that there is evil in the world. To explain evil one of the writers of Genesis told a story of how the goodness of the creation had been tarnished by the self-will of humanity. Now, bit by bit, Isaiah tells of the hope that the new creation will overcome the violation of that first creation. If you can remember the story in Genesis you will see how Isaiah’s prophecy reverses it. Humans will no longer need to hide from God; will no longer be separated from God: in the new creation ‘before they call [God] will answer, while they are yet speaking [God] will hear.’ Humanity will no longer have to toil and sweat for their food; instead ‘they shall build houses and inhabit them; they shall plant vineyards and eat their fruit … [God’s] chosen shall long enjoy the work of their hands’. Women will no longer bring forth children in pain; instead ‘they shall not labour in vain, or bear children for calamity; for they shall be offspring blessed by the Lord— and their descendants as well.’ Everything that went wrong at that first creation will be restored.

The hope that Isaiah offers the exiles who have returned is a world of justice and peace: ‘No more shall there be in it an infant that lives but a few days, or an old person who does not live out a lifetime; for one who dies at a hundred years will be considered a youth, and one who falls short of a hundred will be considered accursed.’ It is a new creation, new heavens and a new earth, in which the whole cosmos will live together in peace. Nothing will be hurt or destroyed on God’s holy mountain, Isaiah assures us. In the face of the climate emergency and humanity’s inhumanity to both the human and non-human creation, could anything be more counter-cultural than to say that this world is God’s good creation and that God’s ultimate intention for it is peace? It seems as foolish to believe that now as it would have been for Isaiah to prophesy it to the returned exiles. And yet that is what we believe.

We know that the universe is almost unspeakably old; almost incomprehensibly vast; amazingly dynamic; unfathomably organic. We also believe that it has been, and is still being, created by God who loves it and intends it to be good. This is why the Pope, and the Ecumenical Patriarch, and the World Council of Churches have told all Catholic, Orthodox, and Protestant Christians that we have a responsibility to respond to the Climate Emergency. As people made in the image of God the Creator we are called to care for God’s creation. We also have the reassurance of knowing that God’s ultimate intentions for the creation will succeed because, as Martin Luther King once said, ‘The arc of the moral universe is long, but it bends toward justice’. Even when things seem hopeless, we need never be without hope.Let us ‘be glad and rejoice for ever’ in what God has created, is creating, and in the hope of the ‘new heavens and a new earth’ that we believe God will create in times to come.